Rebecca Bradley’s “Cadon, Hunter” – Great Book with Something to Say, too

Rebecca Bradley is a fellow writer here at SIN. She recently completed a new book called Cadon, Hunter, a book set amid a clash of civilisations and ways of life. It follows a hunter gatherer tribe who are beset by a plague brought to them from the protagonist, Cadon, as he finds a deserted village. The remainder of the tribe then find themselves held by the encroaching civilised kingdom. 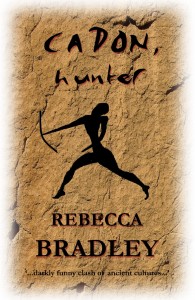 What plays out is a pacey and well constructed tale of peoples coming into contact with aliens, in terms of culture, language, rituals and behaviours. There are some interesting and nuanced aspects of religion, comparing that of the animalistic hunter gatherer beliefs as they come against the more complex divine structures of the urban civilisation, with their god on earth representative (think Pope).

All told, it’s a great tale told by a super story-teller, with her background in ancient history and archaeology coming to the fore. It was, indeed, the first release on our (Rebecca and mine) new fiction imprint, Loom. So, for many reasons (including helping me to afford my mortgage!), please grab yourself a Christmas copy! (UK, here)

Here is an amazon review:

I confess I like dawn of the world sagas, and this a good one. It catches your attention early, and keeps you anxious about the good guys, right to the end. You like the main characters, even when they’re a bit on the evil side! It does get a bit…gory at times, but even that fits in with the background setting. And, it sets up Book 2, which means I’ll have to shell out again to find out how things turn out, but that’s not a bad thing. I like series books too!

I’ve been waiting for this book for years, after seeing half of an early draft by fellow writer Rebecca Bradley. Her depiction of a hunter-gatherer culture savaged by plague due to contact with an early agricultural civilisation has a realism that does justice to her academic background plain. Her story-telling skills and grasp of character make you feel you are living it with the heroes. I always love a good culture conflict with worthwhile people in the middle of it trying to make human sense of inhuman tragedy.

I whistled through this book, testament to the writing and the pacing in Bradley’s first in hopefully further installments. Bradley is a good writer. You can easily say that and have the sentence passed over as a mere generalised statement. But I mean it. She writes very well, characterising with aplomb, nailing the point of views of each person in the story and giving you something on every page.

Bradley has a history in, well, history (of the ancient kind) with her background in archaeology. This shines through with her hypothesising of rituals, events, clothing, language, culture etc. This adds to what is a rich tapestry of storytelling, interspersed with some dry humour, which keeps you turning the pages breezily because those ideas and nuggets are interwoven seamlessly. There are some fascinating elements of early religious thought and criticism as the societies of the established culture comes into clash with the People, the wondering hunter gatherers which certainly piqued my interest.

In sum, it is a darkly funny clash of ancient cultures and I hope Bradley continues to write further stories in what could be a great series.