Not Seeing God on Ebook and Available in the UK 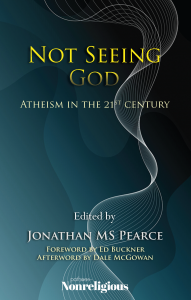 Just a quick heads up that Not Seeing God: Atheism in the 21st Century is now fully available in paperback and filtered through distribution channels in the UK as it already is in the States.

The ebook version is also now available (Kindle, Kobo and Nook with iTunes to follow in the new year).

Here is what was said the other week:

It’s finally here, after a long process of compiling and editing, writing and badgering: Not Seeing God: Atheism in the 21st Century.

We are excited about this new title. It’s been a labour of love and has been particularly rewarding due to the fact that so many great writers have been involved in the production of this book. There are some 24 writers from the ranks of Patheos Nonreligious and they have all done their bit to make this project a really good looking, good feeling, and intellectually stimulating affair.

There is a great variety of writing and subject matter on offer, here, with the first section (Part One: DECONSTRUCTING GOD) dealing with philosophical, moral and theological issues with the God concept. The second section (Part Two: REFLECTING ON GODLESSNESS IN MODERN SOCIETY), deals with atheism within various contexts in modern society, from cinema to the military, politics to education. The final piece of the puzzle (Part Three: LOOKING TOWARD A FUTURE IN A GODLESS WORLD) asks the reader where we go from here, and seeks to give a few answers.

Please click on the link above or the cover to grab yourself a copy (UK link here). Ebook formats are to follow before Christmas (all formats: Onus Books, 2017).

The description, contents and some endorsements read as follows:

Atheism is an evolving worldview – not the single proposition that God does not exist, but everything else that might or might not go with it. With only a single sentence about the existence of single entity, there is huge scope – necessity, even – for having to reasonably work everything else out. It’s a lot more difficult to figure out the world when it’s not handed to you in an old, outdated book. The world is sometimes a complicated place. With this in mind, Not Seeing God looks at the challenges of leaving religion, arguing for atheism, the role and position of atheism in society and where we go from here. This anthology of chapters from the writers of Patheos Nonreligious is a cornucopia of skeptical delights and is a necessary addition to any nonbeliever’s bookshelf, as well as that of the questioning believer. From philosophy to psychology, politics to cinema, the military to folklore, it’s all here in glorious variety, at the crossroad of atheism and society.

Not Seeing OmniGodTM through Philosophy and Logic 13
Jonathan MS Pearce, A Tippling Philosopher

Not Seeing God through Psychology and Neuroscience 23
Matthew Facciani, According to Matthew

Not Finding God in Ethics 61
Dan Fincke, Camels With Hammers

Seeing God in the Bible as Ridiculous 79
Andrew Hall, Laughing in Disbelief

Not Seeing God in the Mind 105
Neil Carter, Godless in Dixie

It Started with Yoga: Unravelling the Threads towards Not Seeing God 113
Suzanne Titkemeyer, No Longer Qivering

Science and Medicine: Not Seeing God in Your Prayers, Thank You Very Much 119
Kevin Davis, SecularVoices

Not Seeing God through Celebrations in Life 125
Galen Broaddus, Across Rivers Wide

Not Seeing God at the Movies 131
Andrew Spitznas, Atheist Cinephile

Humanism and Witchcraft: Not Seeing God in Africa 145
Warren Alan Tidwell, Kudzu in the Pines

The Importance of Visibility when Not Seeing God in Latin America 155
Luciano Gonzalez, Sin God

Politics and Religion: Not Seeing God in the Islamic Republic 165
Kaveh Mousavi, On the Margin of Error

Not Seeing Atheists in Congress 175
Hemant Mehta, The Friendly Atheist

Not Seeing God in the Military 181
Kathleen Johnson, NoGodBlog

Not Wanting to See God in Education, but Damn, He’s Still there 199
Jonny Scaramanga, Leaving Fundamentalism

Part Three: LOOKING TOWARD A FUTURE IN A GODLESS WORLD 211

How to Prepare for Not Seeing God 215
Martin Hughes, barrierbreaker

Not Seeing God in Religion 243
Alan Duval, A Tippling Philosopher

What Comes after Not Seeing God 257
Hank Fox, A Citizen of Earth

In Not Seeing God, philosopher and author Jonathan MS Pearce has collected the top writers on Patheos Nonreligious and set them to work deconstructing god and reconstructing our view of what it means to be godless, both today and in the future. From showing how god as a construct is a side effect of our natural psychology to how the stories in the Bible are folklore rather than truth, from musings on being non-religious across areas of the globe as diverse as Africa, the Middle East, and Latin America, to thoughts on how life holds purpose without the supernatural, this collection has something for everyone to enjoy and ponder. This book should be considered required reading for the well-informed non-theist.

Anyone who has even a passing interest in religion or atheism has much—interesting things, important things, fun things—to learn from the writers included in this book…. [A] fascinating, interesting, useful book.

–Ed Buckner, author (with Michael E. Buckner) of In Freedom We Trust: An Atheist Guide to Religious Liberty, Former President of American Atheists

An original collection of essays ranging from positive arguments for atheism to godlessness in different parts of the world, from the raising of children to meaning and purpose without God. The real surprise here is the number of new ideas presented.

–Franz Kiekeben, philosopher and author of The Truth about God and of Atheism: Q&A

In Not Seeing God, Jonathan MS Pearce has done a wonderful job of providing a very wide range of thoughtful and personal perspectives that give the reader every reason to doubt belief in God. This volume provides a unique contribution to the canon of contemporary god-skeptical literature and is recommended to every curious reader interested in such discussions.

–James A. Lindsay, author of Dot, Dot, Dot: Infinity Plus God Equals Folly and Everybody Is Wrong About God

A varied and interesting collection of work from a great variety of contributors, all weaving together a compelling theme of places and cultures where no god is found.

Not Seeing God is the perfect sequel and antidote to Catholic philosopher Michael Novak’s No One Sees God in which he confessed: “The atheist does not see God—but neither does the believer.… Believers in God well know, in the night, that what the atheist holds may be true.”

Not Seeing God is a concentrated blend of the classical and contemporary arguments against religious dogma from some of today’s most popular philosophical thinkers comprising rapid fire rationality sprinkled with clarity, wisdom and cutting wit. A thoroughly entertaining read that will undoubtedly rattle the cages of dogmatic certainty.

Not Seeing God is an excellent collection of some of the best skeptical writers working today. As one would expect from the writers at Patheos Nonreligious, each piece is well crafted, often humorous, occasionally moving, and always deeply insightful. The quality and diversity of writers and their approaches to not seeing god(s) makes this text a handy reference tool for the next time you find yourself embroiled in a formal debate on the existence of God, or a conversation with a cantankerous relative at a family reunion, or even (OmniGod forbid) a Facebook argument. From defeating Pascal’s Wager (see “Using Common Sense to Not See God” by Bob Seidensticker), to navigating the waters of raising your kids in a religion-soaked world (see “Not Seeing God when Raising your Kids” by Stephanie Savage) this book has so much to offer that I suspect it’ll spend a lot more time sitting on my desk than it will on a shelf.

–David Fletcher, author of Myth Education: A Guide to Gods, Goddesses, and Other Supernatural Beings