Top 5 Deities To Believe In

Myth Education (Onus Books, 2017) is a fabulous book that looks, with humour (but not shying away from the nitty gritty), at several pantheons of worldwide deities. David Fletcher (formerly of the awesome podcast Reasonable Doubts) has collated some wonderful artwork to accompany each of the deities discussed therein. There are over 100 pieces of art to bring these myths alive.

Below, you will find a list of the top five deities that Dave has compiled for your delectation. Over to you, Fletcher! 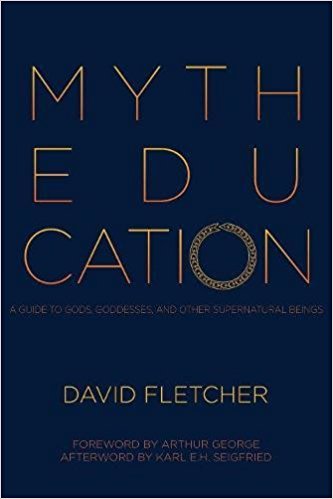 Top 5 Deities To Believe In

It’s easy to not believe in a monotheistic god. Monotheistic gods, I argue, are pretty unappealing. Not only are they often stern, authoritarian, vengeful pricks, but they are (let’s be honest) pretty boring. It’s not their fault, of course, it is more or less a requirement of the job. If you’re the god of everything there isn’t much room for specialization or even characterization. I’m quite content accepting the idea that those divine solo-acts aren’t real and am genuinely thankful that they aren’t. While I don’t believe in the gods of polytheistic religions either, there are some deities that, I admit, would be nice to have around from time to time.

In an effort to capture the zeitgeist of our time, here is one of those “listicles” millennials are so fond of. Here are five deities that I might choose if I was forced to believe in a deity. If you want to pick your own favorite deities, I highly recommend you pick up a copy of my new book Myth Education which is available now and features nearly one hundred gods, goddesses, and other supernatural creatures for you to choose from.

Oshun, the Yoruban goddess (orisha is the more accurate term but why quibble?), is pretty great. Throughout the mythologies of the world it is not uncommon to find the figure of the first woman who, through her greed, ignorance, or impetuousness, brings everything bad into the world. From Eve to Pandora, women are blamed for inflicting mankind with sin, disease, the Star Wars prequels, Donald Trump, and everything else that is evil and wrong in the world. Oshun, however, flips the script. Oshun, the lone representative of womankind, is sent from Heaven with sixteen men to finish off the creation process here on Earth. Surprising to no women at all, the men refuse to listen to any of Oshun’s input. So Oshun proves just how important women are by creating a group of super-powered women who prevent the men from accomplishing anything until they agree to work alongside, rather than against the women. She’s the creator of civil disobedience, peaceful protests, and the goddess of fertility, love, and not taking any crap from men. Oshun is the kind of deity I’d be happy to bend the knee for, if only she existed.

Several of the deities on this list are there because they are inspirational or aspirational figures. They are deities who represent the better angels of our nature and send positive messages of community and compassion. Loki is not that type of figure. Loki is just entertaining. The Norse Loki may not be as handsome as the sexy, sexy Tom Hiddleston, but he’s even more fun to watch. He dissembles better than Richard III, and spins tales more proficiently than Rumpelstiltskin spins straw into gold. Sure he causes all kinds of trouble, but more often than not, Loki is the sole victim of his own tricks: he gets his lips sewn shut and his testicles tortured, he gets impregnated by a horse, and even designs the very net that is used to capture him. He constantly traverses boundaries both literal and metaphorical. To be clear, I’m not suggesting that we start worshipping Loki, or even that his type of behavior should be emulated or praised.  All I’m saying is: if there had to be a god, wouldn’t it be nice to have a dynamic, charismatic, and amusing one?

The Egyptian pantheon is filled with colorful and unusual looking figures. There are deities with cat heads, dog heads, falcon heads, cow heads, ibis heads, crocodile heads, snake heads, frog heads, lion heads, beetles for heads, and whatever the hell Seth’s head is supposed to be, as well as gods with blue, green, or black skin and women with wings, horns, and/or furniture on their heads. Amongst the entire menagerie, however, Bes still stands out. Rather than being tall and lean like most Egyptian gods, Bes is short and squat. He has big, round ears, a beard reminiscent of a lion’s mane, and is most often depicted with his cartoonishly large tongue sticking out of his up-turned mouth. In short (pardon the pun): Bes is adorable. It isn’t (just) his physical appearance that earns him a spot on the list of gods I’d like to believe in. As cuddly as he appears, his function is even more endearing. Bes is the stalwart protector of some of the most vulnerable members of society: children. Even before birth Bes is there to help women through pregnancy and the historically dangerous process of childbirth. Once the mini-humans have safely squirmed into the world, Bes keeps them safe from various dangers, both external (such as disease and hungry, hungry hippos) and internal (like nightmares). But wait! It gets better: Bes keeps all those nasty gremlins at bay by sticking out his tongue at them and doing a silly dance. Not only does he keep children safe, he does it in a kid-friendly manner. What, I ask you, could be more adorable than a baby-protecting dwarf doing a jig to scare away monsters?

The Aztec goddess Tlazolteotl makes this list for purely utilitarian reasons. I don’t know if you’re aware of this, but human beings have made a bit of a mess of this planet. Both literally and figuratively, there is a lot of shit that we’ve dumped onto the pale blue dot which has been nice enough to provide us with residence. Tlazolteotl is just the goddess we need to clean it all up. No, she’s not some benevolent earth goddess who can magically reverse climate change like that thing from Moana; Tlazolteotl is a filth-eater. Rather than passing judgement or forcing you to say x number of “Hail Mary”s, she is happy to hear your confessions and chowing down on your shame and guilt is all the payment she requires. She’ll gladly lap up your dirty secrets like a divine version of Robert Mueller, but she also eats literal dirt. Just imagine if we had a goddess around to eat our garbage, pollutants, and piles of poo. We could continue to destroy the Earth with total abandon, and no regard for consequences and it’d only make the deity happier! No special sacrifices needed, no paying lip-service to being “stewards of the Earth”, we can just keep doing all the horribly shit we’re already doing and it’d be nothing more than feast for Tlazolteotl. Why clean up our act when Tlazolteotl can do it for us?

Ok, this is a bit of a cheat. Kuan Yin is not a god. Kuan Yin is, rather, a bodhisattva. Bodhisattvas are Buddhist figures who have attained enlightenment, but rather than taking on full buddhahood and leaving the world behind, bodhisattvas stick around to help bring others to enlightenment. Bodhisattvas are not deities, but are godlike enough to be included here. Especially because Kuan Yin is awesome. In all stripes of Buddhism, including the decidedly non-theistic forms, Kuan Yin is one of the most important and recognizable figures.  Also called Avalokiteshvara, Kwannon, and various other names (depending on language or culture of origin), Kuan Yin is always regarded as “The One Who Hears the Cries of the World.” While even Kuan Yin’s sex is inconsistent (because mercy knows no particular sex or gender expression), they are always a figure of deep mercy and compassion. Often depicted with dozens of arms, Kuan Yin is there to help those in need in any manner they require. If you’re hungry she offers food, if cold he offers shelter, if you’re stranded somewhere and your cell phone is below 15% she’ll show up with a charger cord, or if you just need a hug he always has an extra couple of arms to help you out. Given the state of the world (war, starvation, oppression, abuse, Trump) it would be wonderful to have an all-merciful, all-loving pseudo-deity like Kuan Yin around.

Since, I argue, none of these figures actually exists we don’t get the benefit of their divine aid. Which, frankly, sucks because it would be great to have a god or gods who cleaned up after us, looked after those in need, stood up for equality, mercy, and compassion, and kept us entertained. Without godly guides to save us, what are we humans to do? Maybe (and I’m just spitballing here) we could learn to rely on and be reliable to each other, and together we can be the arms of Kuan Yin and we can do the heavy-lifting required to clean up the messes we’ve made. Myths can provide us with some great lessons, even without believing in the existence of these or any gods. Those things that are good and admirable about these figures should be emulated to the best of one’s abilities. We don’t need these deities to be real to use them as powerful symbols. Stand up for what’s right like Oshun, break boundaries like Loki, protect like Bes, clean up your shit like Tlazolteotl, and show the compassion of Kuan Yin.

That being said, do not emulate Tlazolteotl too literally — eating poop is really never a good idea.