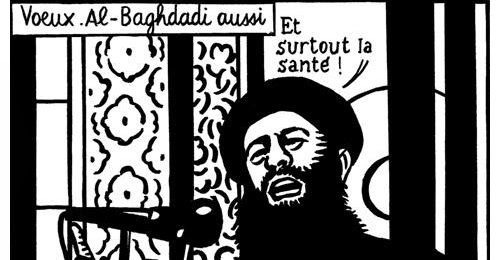 We’re one week into 2015 and freethought in France is already threatened by Islam, now with a shooting at the headquarters of the satirical weekly Charlie Hebdo:

Masked gunmen opened fire in the offices of a French satirical newspaper on Wednesday in Paris, the police said, with initial reports saying that as many as 12 people had been killed and 10 wounded.

Xavier Castaing, the head of communications for the Paris police headquarters, said that 11 people had died, The Associated Press reported. However, a senior French prosecutor raised the toll to 12 in the early afternoon.

The news channel France Info quoted a witness as saying that he saw the episode from a nearby building in the heart of the French capital.

“About a half an hour ago, two black-hooded men entered the building with Kalashnikovs,” the witness, Benoît Bringer, told the station.

“A few minutes later, we heard lots of shots,” he said, adding that the men were then seen fleeing the building.

The Times says nothing about Islamic attribution, but Spanish newspaper El Mundo‘s coverage of the news does:

Justin Vincent, a journalist working in a building next to the headquarters of the satirical weekly, told Efe agency alleged attackers claimed their action with the phrase “we will avenge the prophet“.

Charlie Hebdo‘s office was destroyed by a bomb in late 2011, in response to its comments about Islam.

The fact redoubled Charlie Hebdo‘s determination to challenge Islam with provocative covers and a Mohammed’s biography they issued, among others. A sample of courage as few today.

My complete solidarity with Islam victims fallen today and their families. I’m sure terrorism apologists will find a way to blame all of this on Western oppression (?) and say that it is on the magazine, that they had it coming.