Ran across this cartoon today. 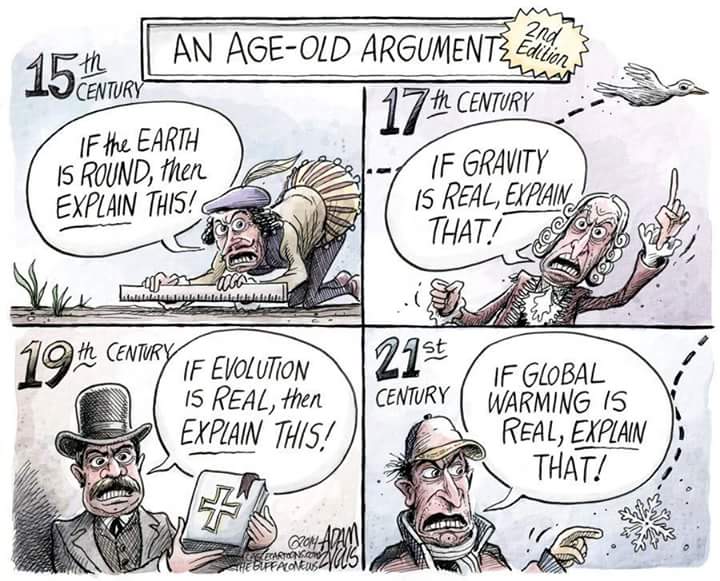 It is a classic problem. Arguing against a long term trend with short term data.

Earth is a sphere. I don’t personally know anyone who would argue that point.  I have heard of a few people who are still flat-Earthers, but I don’t know any of them.

But if you look at any random pair of points on the globe that are only a few feet apart, then you would find an almost infinite number of slopes. The slopes could range a full 360 degrees… including various cliffs that have large overhangs. So you cannot predict the shape of the Earth from only a small length (even a few miles).

Of course, just looking at the shadow of Earth on the moon will show circular shadow as well.

The gravity image is the same. Using the flight of a bird to refute gravity is the same kind of short term change to a long term system. The force of gravity can be temporarily resisted by the application of sufficient force. But the bird still returns to Earth eventually. We do have systems that can overcome the gravity of Earth and even the sun. Gravity will still affect them, but is incapable of pulling them back to Earth (or the solar system).

Evolution deniers also have issues with short term vs. long term. Many creationists have no problem with evolution within species (adaptation) or even within groups of similar species. Even Young Earth Creationists who believe in Noah’s Flood must accept that speciation occurs. This evidence for this is non-controversial.

What most of them do not accept is the change in higher orders of organisms (for example, dinosaurs to birds or fish to tetrapods). I’ve explained why this is a misconception here. They (everyone) can see short term evolution in the lab, in the wild, even in our own lifetimes. We cannot observe every single step between dinosaurs to birds in a single lifetime. These types of transitions took place over hundreds of millions of years.

Climate change is the same. In the short term and in small regions, large variations in weather can and are expected to occur. This includes record breaking snowfall and cold temperatures. But if we consider the entire Earth over long periods of time (decades or longer), then we see that global warming is a real event.

There’s two examples I have of how one’s use of improper statistics and improper consideration of long term vs. short term data can result in large misconceptions.

The first is a joke. Bill Gates walks into a bar and makes everyone a millionaire… on average.

Bill Gates is the wealthiest man in the world, with an estimated value of 100 billion US dollars. If you put him in a room with 10,000 people with a net worth of 0, the average for everyone in the room is just under 10 million dollars each. But that’s a huge misconception. If you take a person at random, that person is much, much more likely to have no money at all.

Another example happened just recently in Texas. During the month of May, 2015, there was not a single day that some place in Texas received 4 inches of rain. During that month, Texas got more rain than it had gotten in all of 2011.

If someone was to take a reading of Texas during that month and assume that all months were like that, one could think that Texas was a tropical rain forest. But it’s not, much of Texas is arid to desert and only East Texas is considered to be barely non-arid.

Science is about looking at data over long periods of time. Changes to scientific ideas are not made on a daily basis or with only one data set. For example, if one were to look only at Seralini’s conclusions, then one would accept that GMOs are dangerous (ignoring the huge flaws in his study). But comparing that one, flawed, paper to the thousands that do not find problems with GMOs, we are left with the conclusion that GMOs are not dangerous.

I should add that the point here is not to discuss the evidence for these concepts, which is significant. I’ve talk about them before. This is purely to show how short-term, incomplete thinking and an improper use of data results in the misconceptions. I should further add that, in many cases, it is not correct that considering improper time ranges and data sets are the problem. The real problem is people deciding what the answer is, then purposefully making these mistakes in order to convince people who don’t understand the difference between short-term and long-term systems that science is wrong.

There is one last point to make here. The “explain that” statements have all been dealt with, in a scientific manner. Yet science deniers continue to ignore those explanations. I’ve dealt with some of these people over long periods of time and they continue to promote the same flawed idea and demand the same answers from science. What’s shocking is that they get those answers. Then, a few months later, they will pop up with exactly the same argument as if they haven’t been given the information they say that they are seeking dozens of time.