Yes, You Must Have a Designer

I get this on nearly a daily basis from proponents of intelligent design, “The designer doesn’t matter if we can detect design.”

Sorry, but that’s just wrong. First of all, there has been no case, ever, of an ID proponent detecting design. They claim to “see” design in various aspects of biology, biochemistry, geology, physics, and astronomy. But what they cannot do is detect design in a controlled experiment. They have never successfully (or attempted as far as I am aware) determined design or non-design in anything of known providence without being aware of the design or non-design first.

This is exactly the same kind of conditions that are required of the James Randi Paranormal Challenge. While ID proponents claim to have detected design in living things, what they have never shown is that living things are actually designed.

Consider that if you and I were sitting in front of a safe. Neither of us had ever seen it before and neither of us knew the combination. If I insisted that the secret formula of Coca-cola was in the safe, then you would be right in questioning me. Neither of us have any way to verify it and you know I really don’t have a clue what’s in the safe. That’s ID in a nutshell.

Until an ID proponent can successfully determine design, then we’re left with the designer.

Here’s the thing, Meyer (for example) is convinced that the body plans of the majority of the species alive today originated in the Cambrian Explosion some 540 million years ago. I believe that most ID proponents would say that the designer is also responsible for the creation of life between 3.5 and 2.7 billion years ago. And, as we see here, Meyer posits the designer with credit for the development of echolocation in bats (roughly 50 mya) and whales (prior to 28 mya).

Even assuming that the designer is a species of (to paraphrase Michael Behe) alien cell biologists, their species has been around longer than every thing on Earth and even billions of years ago, they had sufficient technology to travel to Earth and modify genomes in such a way as to leave traces that deliberately echo evolutionary patterns.

Indeed, some ID proponents have claimed that the designer only acted once, but left all the information needed for ALL  living things that ever where or will be, in the genome of those first organisms. This is process known as front-loading. This is clearly impossible, since the genome of every living thing on the planet is different and those first organisms genome surely wasn’t large enough to carry every bit of information needed for everything that would come later.

ID Proponents say that we know design because we see it all the time. We see events and products that are the product of intelligence. That much is correct. We do see products, devices, technology, and all kinds of intelligently designed events that wouldn’t exist in nature without an intelligence.

Consider the following. Click on the picture to go to the full information from the Brooklyn Museum. 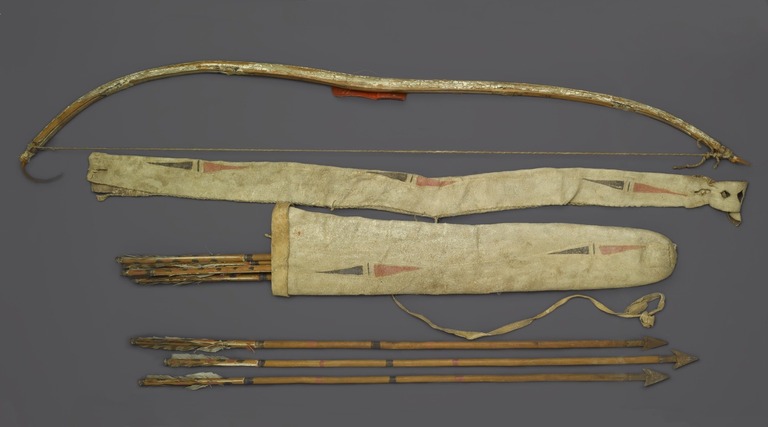 This is obviously something intelligently designed. It would be very, vastly, improbable that this combination of products from a variety of animal and mineral sources were to randomly come together to produce this bow, quiver, and arrows.* Therefore an intelligence must have created it.

Given that we know of only one intelligence that uses tools to make other tools (though more recent studies show this may not be correct), we can safely assume that this was designed and constructed by a human. But that’s not all. Because of the area in which is was found, we know that the human constructing it was not Eskimo, African, Asian, Australian, European, and most probably not South American. We know that modern humans (by which I mean in the last hundred years) did not construct it as well. We know that elk, horses, buffalo, and ducks were in the area at the time of construction.

We know all that, from just looking at the device.  In case you’re curious, it is believed to be from either the Sioux, Nakota, or Yankton cultures.

Now look at this bow and arrow set.

We know that this bow was not made prior to 1958, when the carbon fiber process was first developed. We know that the intelligent designers of this bow have extremely advanced technology. Look at the three tube system and the pulley design. This is a complex feat of engineering and construction. Again, we know it could not have been developed prior to 1958 and it probably wasn’t developed before the extensive use of computer-assisted-design. We know that the designer and builder of this device has mastered some impressive knowledge of chemistry and physics to build this device. Something else that cannot appear in nature.

Now, when intelligent design proponents talk about how looking for intelligent causes is used in today’s world, they are correct. SETI (Search for ExtraTerrestrial Life) is looking for design. Specifically it is looking for radio signal modulations that cannot occur in nature and, like the carbon-fiber bow, can only be developed by a technological species.

Meanwhile, the ID proponents are saying that there is an intelligent designer that has lived or had a program running for well over 2.7 billion years, had levels of technology that we’ve barely begun to explore, and a willingness to meddle. Of course, that begs the question of where that intelligence came from.

But, what can the ID proponents tell us about the designer by looking at its designs? I’ve said more, in the preceding paragraph, about the notional designer than any ID proponent I’ve ever read.

Of course, if you actually read everything the various ID proponents write, then it is obvious that the designer is god. In general, it is some variation on the Judeo-Christian god. Sadly, that brings up many, many more problems than it solves.

What are we left with?

We also have no designer. We have no evidence of any designer capable of accomplishing the things claimed of it, including: surviving for billions of years, performing changes to DNA that mesh perfectly with what we would expect to see via evolution, successfully predicting the future state of DNA millions of years down the road, not to mention getting to Earth, not to mention who designed the designer, all for an unknown purpose.

Finally, and this is just me kicking the corpse because it pissed me off. No ID proponent has ever used ID principles to predict anything. That’s a necessary feature of a theory… predictive power.

Until ID proponents deal with these issues (and in the past 18 years, they haven’t even made the attempt), ID is useless.

** I’ll leave it to an anthropologist to tackle that question, but while it is possible for them to construct the bow, I doubt it would last very long in harsh conditions.