This is another classic.  It’s been around for decades, if not hundreds of years.  Where are the transitional fossils?

Creationists have a funny habit.  Whenever presented with a transitional fossil, the creationists shout “Ah-Ha!  You now have TWO missing links.”  This is obviously pretty dumb if you think about it.

Here’s what the Texas creationists think is a weakness of evolution.

Most major proposed transitional forms are problematic and controversial. Rarely does the whole organism fit into the proposed developmental path. For example, birds are often said to have transitioned from reptile- hipped dinosaurs like Velociraptor.  But these have a different kind of hip structure than birds.  Birds have the same kind of hip structure as the dinosaurs like stegosaurus and the horned dinosaurs.

Most transitional forms are not problematic or controversial.  At least among the experts who review them.  Transitional has a very specific meaning in science and is often misunderstood by creationists.  Transitional does not mean that a fossil is a direct ancestor of a more modern organism.  It does not mean that it is intermediate in time between two other forms.  A transitional fossil is still useful in that it can model the features of the actual intermediate organism.

All that transitional really means is that certain features are intermediate between an ancestral group and a derived descendant group.  That’s it.  Certain features.  And the organism is not required to be a direct ancestor.  In fact, given the rarity of fossilization, it would be exceedingly unlikely to get any organism that is a direct ancestor or descendant of another one.

A commonly misunderstood transitional fossil is Archaeopteryx lithographica.  I don’t think that there was ever a time when paleontologists considered it to be the direct ancestor of birds.  However, it is a very good transitional fossil.  Chris Nedin published an excellent article on talk origins that details the differences between dinosaurs, birds, and A. lithographica.  I copied this table from the link.

Note that out of 23 features, A. lithographica is more like dinosaurs that birds in 15 of them.  While it is more like birds than dinosaurs in only 4.

Transitional doesn’t mean that A. lithographica should have half of a wing.  Creationists have mostly gotten away from this claim, because it’s obviously stupid.  A kid that is 5’8″ is transitional between a kid that is 5’4″ and one that is 6’2″.

It’s also very important to repeat that transitional does not mean intermediate in time.  It only means intermediate in features.  A great example (and an excellent example of the predictive power of evolution) is Tiktaalik roseae.

If you haven’t read Neil Shubin’s book Your Inner Fish, then I really encourage you to.  It is short, well written, funny, and full of useful information.  Part of it describes how Shubin and his colleagues found what may be the best transitional fossil in all of history.

Using that, they found a location with rock of the right age, type, and environment.  A few years later they found Tiktaalik.  An organism that has intermediate features between fish and amphibians.

Since then, earlier amphibians have been found.  Doesn’t matter.  Tiktaalik is still transitional.

Further, the mere existence of these transitional fossils shows that creationist claims are wrong.  Especially about ‘macroevolution’ (I hate that term).  If intermediates exist, then the steps necessary to get from fish to amphibians are much smaller than previously thought.  Suddenly we’re not talking about jumping from pure fish to pure amphibian in a few steps.  We’re talking about a few steps from pure fish to pure fish with tetrapod wrist bones.  A few more steps from gill sacs to primitive lungs (not ‘half a lung’).  And so on.  These are small enough steps to be easily accomplished by minor changes in development.

The creationists here also make a very specific claim about birds and dinosaurs.  It’ll take me a bit to explain, but stick with me.  This will totally discredit the creationist claims.

First we start with the problem.  Let’s take a look at the evolution of dinosaurs and birds.

This is a cladogram showing how various reptiles evolved.  If you are familiar with cladograms, then feel free to skip a paragraph or two.

Across the top are genus names.  For example, Anas is the name of a genus of dabbling ducks, which includes mallards.  The lines show how the various genuses are related to each other.  The closer the lines to two genuses connect, the more closely related. Anas and Gaviiformes (loons) are very closely related.  While Anas and Alligator are not so closely related.

The names within the lines are group names.  So Anas are members of Aves, Theropoda, Saurischia, Dinosauria, Ornithosuchia, Archosauria, and Repilia.  They are not members of Pterosauria or Saurpodomorpha (to name two).  With me so far?

The Ornithischian dinosaurs are the giant herbivores that we all know and love.  Stegosaurs, Ceratopsians (Triceratops), and the duck-billed dinosaurs are all bird-hipped.  But birds didn’t come from these guys.  Birds came from the small, bipedal, predatory dinosaurs.  Which are all lizard hipped dinosaurs.

Well, how would evolutionary theory be used to explain something like this.  I bet, that if we looked at the fossils of the lizard-hipped dinosaurs that we think were closely related to birds, that we would see a transition between a forward-pointed pubis and rearward-pointed pubis. 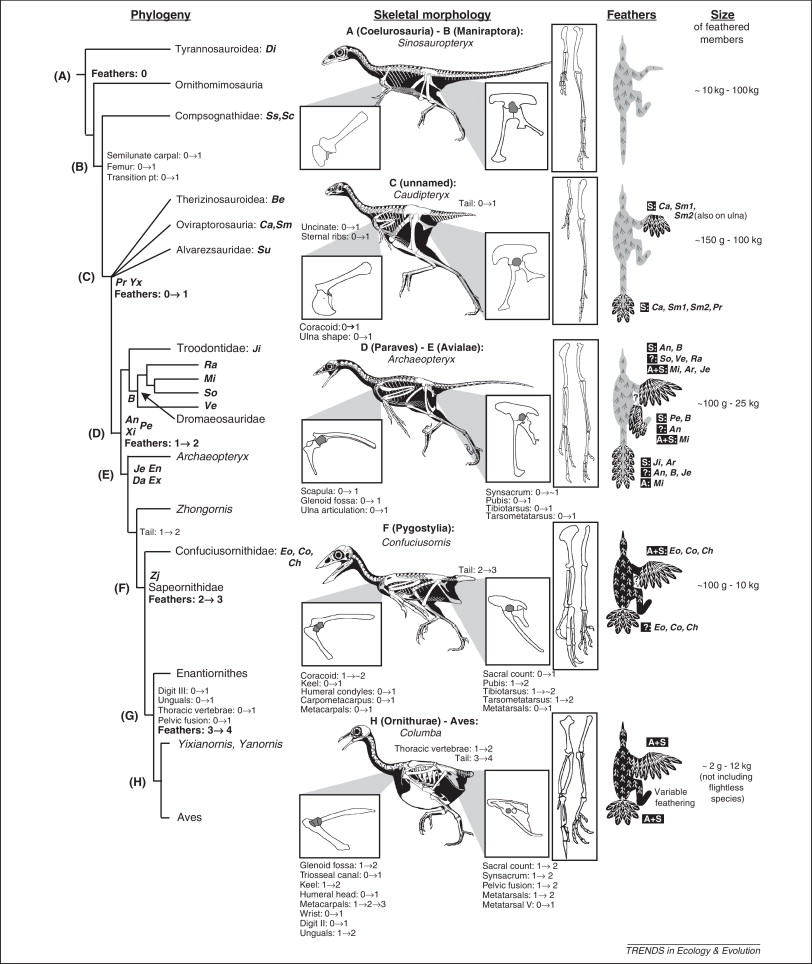 Sorry for the crummy picture, but you can see that we move from top to bottom, we see a skeletal transition just like I described.  This diagram also shows how feathers appeared in just a few places, then covered the entire animal.

Bird hips evolved twice.  It’s been known to happen.  Look at bats, flight evolved in something besides birds.  Of course the Pterosaurs had it first.  Flight has evolved no fewer than 4 times (probably more) in the history of life on this planet… and that’s not counting gliding marsupials, ‘flying’ squirrels, and gliding snakes.

None of this is idle speculation either.  There are probably tens of thousands of peer-reviewed papers showing these (and other) transitions.  The cladograms are based on terabytes of rigorous and detailed data about the organisms.  It’s not a just-so story.  It’s decades of evidence that creationists just ignore.