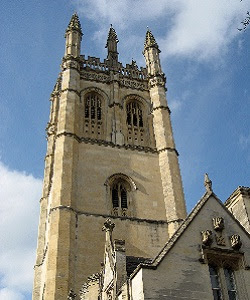 Just off to take part in this… here.

n both Europe and North America, an increasing emphasis on equality has pitted rights claims against each other, raising profound philosophical, moral, legal, and political questions about the meaning and reach of religious liberty. The questions emerge in several areas — for example, questions of religious conscience, an all male Roman Catholic clergy, or the prospect of establishing a separate Muslim system of family law within a democratic state.

No question is more salient in the West, however, than the emerging conflict between new equal rights claims on behalf of homosexuals and existing claims of religious freedom. The conference at Magdalen College will focus on this issue as the primary exemplar of the broader conflict.

Three examples illustrate emerging conflicts surrounding the principle of equality and the rights of religious groups and individuals.

– The Catholic Archdiocese of Washington DC ceased its foster care program because DC’s same-sex marriage law would have required placement of children with same-sex couples.

– The High Court in the United Kingdom denied to a married Christian couple the right to foster children because they would not agree to teach their children that homosexuality is natural.

– In California, the federal judge who overturned a referendum defining marriage as between a man and a woman dismissed religious and moral arguments against same-sex marriage as “irrational”, and for that reason unconstitutional.

Each of these examples addresses the tension between claims of equal rights and the claims of religious freedom in various domains: the rights of religious communities to adhere to their fundamental teachings, including protecting the rights of conscience; the rights of parents to impart their religious beliefs to their children; and the liberty to advance religiously-based moral arguments as a rationale for laws.

The conference will bring together leading scholars, politicians, and religious leaders to explore how these tensions and conflicts are playing out differently on both sides of the Atlantic. It will consist of three panels – on the United States and Canada, the United Kingdom and Ireland, and continental Europe – that debate a core set of questions.

– What are the legal and moral frameworks that govern tensions between claims for homosexual equality and for religious freedom?

– How are those tensions illustrated in particular legal, political, and policy controversies?

– What is the proper balance between new claims of equality before the law, on the one hand, and existing claims for freedom of religious groups and individuals, on the other?

By exploring these complex issues in-depth and from differing perspectives the conference will contribute to scholarship and wider public debate in a critical, emerging area.