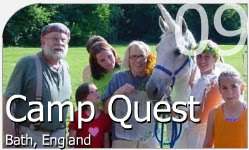 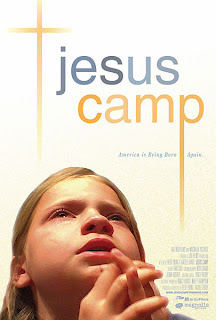 Camp Quest is now operating in the UK, I discovered last night, after meeting Samantha Stein, who is the director. She is going to be running some really excellent programmes for kids aged 9-15. This is the antidote to Jesus Camp.

Camp Quest, founded in 1996, is the first residential summer camp in the Europe, United States and Canada specifically for irreligious children or the children of nontheistic parents (including atheists, agnostics, secular humanists, skeptics, (nontheistic) rationalists, freethinkers, brights, antireligionists, and others who hold a naturalistic worldview). The camp is offered as a godless alternative to traditional religious summer camps, such as vacation Bible schools.

The camp’s programs and activities also include what is usual for summer camps: campfires, canoeing, crafts, drama, games, nature hikes, singing, and swimming. Sometimes, however, a spin may be used, such as the telling of an ancient mythical tale around the campfire or the debunking of creationism on part of a nature hike or fossil hunt. Both competitive and cooperative sports are used. Past activities have included how to make a crop circle and visiting old cemeteries to use tombstones as clues to the mores of the past.

I stress that, as Samantha describes it, this is not an atheist indoctrination camp (!), but a free-thought camp. You can book on the website if your kids are interested.