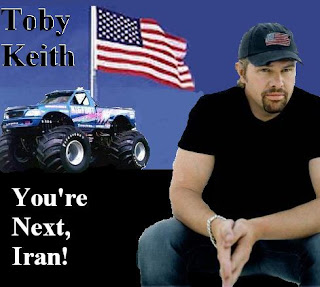 Toby Keith – country and western superstar. I have just been trawling through this guy’s back catalogue after discovering him on the Stephen Colbert Christmas Album. At first I thought he was a spoof, but no…

Check out this stirring video: “We’ll put a boot in your ass, it’s the American way.”

On the Colbert Christmas album (see UK itunes) Keith sings a song about Americans taking Christmas back and decapitating those who call for the separation of church and state.

For some reason we Brits – especially the left-leaning Liberal ones – are constantly being told we are anti-American. We hate America.

I really don’t think I do. I’m a big fan, I’d say. The problem is the U.S. has for some time now been run by the elected representatives of those who buy Toby Keith albums. Criticisms of “America”, in this context, were criticisms of American policy, especially foreign policy, and the dickheads running it. Those days are over, we hope. Like many Americans we Brits also got all teary-eyed when Obama won. All’s forgiven. We don’t hate America anymore.

Unless, of course, Palin is right and it’s Toby Keith and those who love him that are the “real America”. Then, hey, I still hate America!

Anyway, this is just for the benefit of Brits who have never come across Toby Keith, who is unintentionally funny (and intentionally scary) and almost beyond belief.

Review of his recent album here (that’s the cover, btw):

Amazingly, it’s already been six years since Toby Keith ignited Americans’ patriotism with his post-9/11 anthem “Courtesy Of The Red, White & Blue (The Angry American)”. However, it doesn’t appear that time has healed all wounds. In Keith’s latest release You’re Next Iran!, the singer takes the opportunity to renew his disdain for terrorism, and most of the Middle East in general. In the album’s title track, Keith hurls verbal barbs at the aforementioned country (and most of its neighbors), threatening “some serious pain” if its leaders try “any funny stuff.” On other songs, the honky-tonk hero sends a warning to Saudi Arabia about oil prices (“Fuel The Fire”) and cautions Syria about harboring terrorists (“Keep Your Nose Clean”). Unfortunately, much of the passion of “Courtesy of…” is missing from this album, and some of the aggression seems rather forced. This is perhaps best evidenced on the track “Wrong Place, Wrong Time” where Keith takes some un-provoked pot shots at largely-peaceful Qatar, stating “You’re just like the rest, so don’t mess with the best.” Die-hard Toby Keith fans should feel right at home with this album, but most others will probably want to steer clear.

POSTSCRIPT – I didn’t notice at first that this review was wholly satirical. There’s really no such album. Thanks to Paul C.