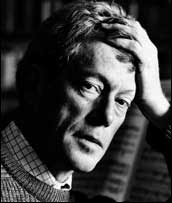 Philosopher Roger Scruton and others have attempted to justify our discriminating between pigs on the one hand and equally dim humans on the other by appealing to the notions of potential and normality. Even dim humans have, or at least once had, the potential to be smart sophisticated creatures like ourselves, capable of entering into rich, complex moral communities. Moreover, human beings will, under normal conditions, develop into such individuals. Pigs won’t. That is why we are under a powerful moral obligation to care for and nurture dim humans, but can in good conscience send equally intelligent pigs off to the abattoir. This paper presents a thought experiment designed to bring out the inadequacy of this type of justification.

Why is it typically wrong to kill and eat human animals, but not other sorts of animal? What is the difference between our species and others that justifies us in treating them so differently?

This is a notoriously difficult question to answer. There is no doubt that we do quite properly morally discriminate between different kinds of being. For example, we treat children differently to adults. We restrict what children are able to do; we don’t allow them to vote, and so on. But this is justified. Children are not sufficiently rational or responsible to be able to look after themselves properly or to exercise the vote. There’s a morally relevant difference between children and adults that warrants this difference in treatment.

Not all differences are, in this respect, morally relevant. Take skin colour and sex, for example. Both black people and women were at one time denied the vote. Their freedom was also heavily restricted, and in some places still is. But while black people and women have been discriminated against, the differences between them and their oppressors did not and does not justify the difference in treatment. When it comes to the right to be free and to have the vote, what’s morally significant about race or sex? Nothing at all. Those who discriminate on the basis of race or sex are guilty of racism and sexism: forms of prejudice and bigotry against those who are different.

The challenge facing those of us who believe it is morally acceptable to kill and eat, experiment upon, etc. other species but not our own is, in effect, to point out the difference between us and them that morally justifies this marked difference in treatment. Unless we can point up some such difference, it seems that we, too, are guilty of a form of bigotry: the form for which Richard Ryder coined the term speciesism.

The appeal to mental sophistication

It is widely supposed that the difference between humans and other species that justifies this difference in treatment is that the non-human species are comparatively unintelligent and unsophisticated. The members of other species cannot master language. They are incapable of entering into or even grasping the complex social relationships that bind we humans together into moral communities. It is this, some argue, that gives us the right to kill and eat them, experiment upon them, and so on.

Despite it’s popularity, at least among the general public, this sort of justification runs up against a well-known counter-example. What are we to say about human beings who are no more intellectually or morally sophisticated than is, say, the average pig? If the morally relevant difference between humans and other species lies in this kind of mental sophistication, then these humans will be no more deserving of our moral respect than is a pig (which is, no doubt, deserving of some moral concern, though of course nothing like the level concern we afford to all human beings, no matter how dim the latter might happen to be). Those who wish to discriminate on the basis of intellectual and moral sophistication must say either that it would be morally acceptable to kill and eat, experiment on, etc. these mentally impaired humans, or else we must say that, if these human beings are sufficiently mentally sophisticated to qualify them for the right not to be killed and eaten, experimented upon, etc. then so too are pigs.

That is not, of course, how we currently discriminate.

The appeal to potential and normality

How, then, might we justify discriminating as we do, if not by a straightforward appeal to mental sophistication? I now turn to one of the most popular responses to this challenge.

It has been argued that it is not what a mentally impaired human being is that is important, but what he or she might have been. While the impaired individual may not now have the potential to be smart, there was a time in the when, had things been different in a not-so-improbable way, they would have turned out smart.

Suppose for example, that someone is mentally impaired because as a foetus they were damaged in the womb, or because their father was accidentally irradiated, causing damage to the sperm from which that individual then grew. We can say about this person that the potential to be a smart, morally aware individual was once there, even if it has now been lost. And that, some suggest, is the morally relevant difference between this individual, on the one hand, and a pig, on the other: the difference that morally permits us to kill and eat, experiment upon, etc. the pig but not the human.

A slightly different move is to suggest that the pertinent difference between pigs and mentally impaired humans is one of normality. Human beings, under normal circumstances, develop into smart creatures belonging to moral communities. Pigs do not. It is the fact that human beings normally develop in this way that qualifies even atypical members for special moral consideration far beyond that which we extend to pigs.

The appeals to potential and normality are not quite the same. After all, while each member of a species may have – or once have had – a clear potential for X, it does not follow that becoming an X is normal for members of that species. While each bee once had the potential to become a queen, bees do not normally become queens.

Roger Scruton attempts to justify our discriminating between pigs etc. and similarly dim humans by appealing to both potential and normality:

It is in the nature of human beings that, in normal conditions, they become members of a moral community, governed by duty and protected by rights. Abnormality in this respect does not cancel membership. It merely compels us to adjust our response… It is not just that dogs and bears do not belong to the moral community. They have no potential for membership. They are not the kind of thing that can settle disputes, that can exert sovereignty over its life, that can respond to the call of duty or take responsibility on a matter of trust.

Scruton concludes that, because of these differences between pigs, etc. and similarly dim humans, we are morally justified in discriminating as we do.

There is, I think, something deeply unsatisfactory about Scruton’s attempt to justify our current discriminatory practices. Consider the following thought experiment.

Suppose that on a planet many light years from the Earth there has evolved a species that bears an uncanny resemblance to we humans. They look much like us, and indeed are physiologically and genetically very much like us. However, they are dim. They have no moral or aesthetic sense. In fact, they are no more mentally sophisticated than is the average pig. As a species, they are not, to borrow Scruton’s phrase ‘the kind of thing that can settle disputes, that can exert sovereignty over its life, that can respond to the call of duty or take responsibility on a matter of trust’.

Now imagine we are presented with two groups of individuals. The first group are orphan offspring from this other planet. They are dim because individuals belonging to that species are normally, naturally dim. The second group are terrestrial human beings: the orphan children of men and women like ourselves. But they too are dim, as dim as the extraterrestrial group, in fact. The second group’s mental impairment is due to a nuclear mishap. Their fathers were accidentally irradiated, resulting in damage to the genetic code handed down to them.

Let’s suppose these two groups are otherwise identical. Indeed, they are molecule-for-molecule duplicates of each other. The immediate cause of their dimness is in each case the same: their genetic code. However, while the two groups share the same code, they possess it for different reasons. The terrestrials possess it because they are the unfortunate victims of a recent nuclear accident. The extra-terrestrial group possesses it because of their evolutionary ancestry.

Note that while the members of the extra-terrestrial are ‘normal’ for their kind, the terrestrials are not. Human beings, under normal conditions, develop into smart, sophisticated creatures like ourselves. They are that kind of thing.

Also notice that, unlike the extraterrestrials, the terrestrials once had the potential to be smart. Had their fathers not been involved in that nuclear accident, they would have been as mentally sophisticated as ourselves. The extra-terrestrials, on the other hand, were always going to be dim. That is their nature.

Let’s now test our moral intuitions with the following question: Are we morally permitted to discriminate between these two groups? In particular, would it be wrong to kill and eat, experiment upon, etc. the second group but not the first?

Similarly, if it is potential that counts, then while we have a special duty of care towards the terrestrials, their extra-terrestrial doppelgangers can in good conscience be loaded onto the truck bound for the abattoir.

But of course this verdict is profoundly counterintuitive. How can we possibly be justified in treating these molecule-for-molecule duplicates so very differently simply because they differ in terms of potential and what is “normal” for their kind?

Suppose a mistake is discovered: a couple marked out for the special care centre we have designed to look after the dim humans are suddenly discovered to be of extraterrestrial origin. Would there be anything wrong in diverting these two to the abattoir instead? Surely there would.

What this thought experiment elicits (in me, at least) is the very strong intuition that the difference between the terrestrial and extraterrestrial groups in terms of both normality and potential does not justify such a difference in treatment.

Indeed, the question arises: Why are we justified in discriminating between humans and other species on the basis of potential and what is normal for the species. Why suppose that this difference justifies us in supposing that, while we are under a powerful moral obligation to care for the dim humans, the pigs can happily be sent off to the abattoir?

What this thought experiment brings out, I hope, is that not only has Scruton not provided such an explanation, it is extremely difficult to see how the difference in what’s “normal” for the species could possibly justify this discrimination.