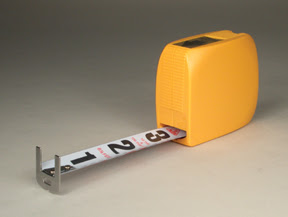 There’s a short piece by me here on systems of measurement – for the philosophers among you. It’s on something I call the smedlium case:

Imagine a world quite similar to our own that contains large quantities of a metal-like material – let’s call it smedlium – which gradually and unpredictably alters in size. All smedlium objects expand and contract in unison. At one o’clock on one particular day all the smedlium objects are 5% larger than they were at mid-day; at two o’clock they are all 10% smaller, and so on. Despite this peculiarity, smedlium remains a useful material. In fact, it is the strongest and most durable material available. One of the inhabitants of this world builds machinery made wholly out of smedlium. The machines are used in situations where their size relative to non-smedlium objects doesn’t matter. The smedlium engineer constructs and calibrates a measuring rule made out of smedlium to use when manufacturing such machines. She measures dimensions in ‘S’s, one S being measured against the length of her smedlium measure. Of course, so far as manufacturing smedlium machines is concerned, a smedlium measure is far more useful than is a rule made out of some more stable material, for it allows the smedlium engineer to ignore the changes in size of the object upon which she is working. For example, she knows that, say, if the hole for the grunge lever measured 0.5 S in diameter at one o’clock, then a grunge lever which measures 0.5 S in diameter at two o’clock will just fit into that hole, despite the fact that the hole is now noticeably smaller than it was at one o’clock.