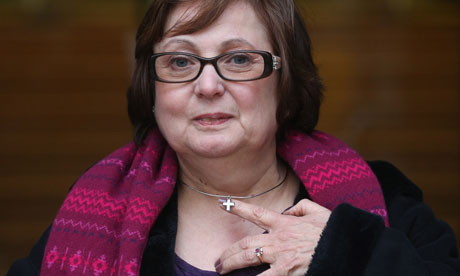 Christians are framing it like it’s a discrimination issue – it is not; having a religion is not an excuse not to follow the rules:

Chaplin, 57, a geriatrics nurse from Exeter, was moved to an administrative job after she refused to take off a crucifix around her neck. Her case was rejected in January on the grounds that such an instruction was necessary for hygiene and the safety of patients and staff.

Ladele, 52, a local authority registrar, was disciplined by Islington council in London for refusing to conduct civil partnership ceremonies, while McFarlane, 51, a Bristol relationship counsellor, was dismissed by the charity Relate for saying he might object to assisting same-sex couples.

The court had ruled that both employers’ actions were justified, given their obligations to prevent discrimination against people using their services.

“We hope that this will now draw a line under the attempts by a small coterie of Christian activists to obtain special privileges for themselves which would invariably come at the expense of other people’s rights.

Too bad Nadia Eweida got away with it!