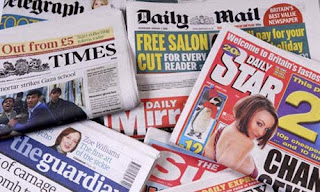 JOURNALISM, CHURNALISM AND MEDIA BIAS
Ben Goldacre, Rich Peppiatt, Michael Marshall, Greg Philo
How much journalism is churnalism– the uncritical regurgitation of press releases? To what extent can we trust what we read in the press about medical and other scientific discoveries and breakthroughs? How impartial is mainstream media coverage of key political and economic issues? And just how much of tabloid news is just, well, made up?
Saturday, 15th December 2012
Conway Hall
25 Red Lion Square
London WC1R 4RL
11am-5.15pm (10.30am registration)
£10 (£5 students concessions). Free entry for Friends of CFI UK.

Tickets on the door and from the BHA website here:http://www.humanism.org.uk/meet-up/events/view/196
Introduced by Stephen Law
Speakers include:
Ben Goldacre (Guardian columnist, doctor and author)
Michael Marshall (expert on press-release-based churnalism)
Rich Peppiatt (a former tabloid journalist, shortly touring a show based on his experiences)
Greg Philo (Research Director of the Glasgow University Media Group. Co-author of Bad News from Israel). Greg will be speaking about the role of the media in the production of public confusion and consent.