This previous post bears repeating in the current economic climate…

If you are wondering what kind of degree programme is likely to boost your general smarts, consider these figures. 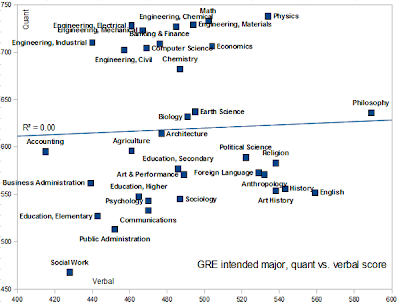 Go here. This is one of several graphs from the above article. Based on GRE test performance (Graduate Record Examination) of graduate programme applicants. Quantitative (math) skills on the vertical axis, verbal skills on the horizontal (other graphs include the third component – “analytical writing”, at which philosophers also excel, dramatically outperforming all others).

Philosophy graduates are pretty damn smart, the various figures suggest, compared to graduates with other degrees, including most – perhaps even all – sciences (though were they smarter to begin with, or did their degree programme make them smarter, compared to other degrees?). Check the article. Here‘s the original table of GRE scores of US students completing a variety of degrees.

This data suggests (but falls a long way short of establishing) that if we want to produce graduates with general, across-the-board smarts, physics and philosophy are disciplines to encourage [and possibly also that accountancy and business administration should be discouraged (this confirms all my prejudices, I am pleased to say!)].

Note some very weird stats on this graph, such as business administration’s woeful performance, doing less well than even “art and performance” on quantitative skills and verbal skills (which is staggering). And accountancy grads less good on quantitative skills than philosophy grads (!) and the worst performers of all on verbal skills. Both business and accountancy are also weak on the analytic writing component.

Of course, as the new business-friendly, market-led Tory vision of degree provision kicks in, we’ll probably see philosophy departments up and down the country closing and business administration degrees expanding. Brilliant. 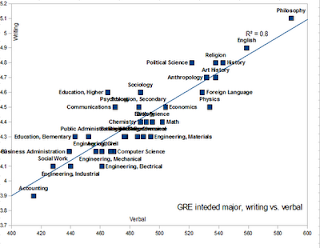