Categories Menu
Home » Uncategorized » What is the Conservative Party for? The cui bono test

What is the Conservative Party for? The cui bono test 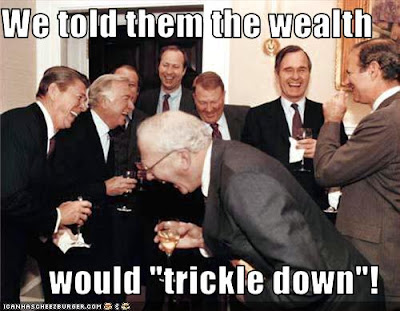 Can anyone think of anything the Tories have done in this parliament (economically, I mean) that has not been about financially benefiting the rich and/or big business (i.e. their backers), typically with the result that the resulting financial burdens are loaded onto those lower down the economic scale? I can’t.

I thought I’d discovered an example a couple of days ago when I heard that the Government were helping first time buyers with an assisted deposit scheme. “Finally” I thought, “Some evidence that the Tories are not only interested in helping out their rich mates. I am after all being cynical in suspecting the Tories are only about the rich and big business.” But of course it turns out the scheme is only for those buying new build homes. It’s actually a way of helping out the construction industry, and was probably suggested by industry lobbyists.

Can anyone reassure me by coming up with a significant economic policy introduced by this Government that was not about trying to help the rich and big business, often to the financial detriment of the rest of us? NHS reform, students loans and HE reform, pensions, tax, child benefit, removing national pay scales for teachers, etc. etc. Sadly, I can’t think of a single example.

If we apply the cui bono test to this Government, I find it hard to avoid the conclusion that, behind the window dressing, the Conservative Party is really little more than an organization for redistributing wealth to the benefit of the wealthy. I don’t want to think that, for various reasons, not least because it makes many of my Tory-voting friends mugs. I can still be a liberal lefty even if it’s not true. But it does seem to me to be true – so by all means go ahead and correct me…

Take the plan to flog off the roads announced yesterday. This is presented as being about getting Britain the infrastructure it desperately needs. But cui bono? Who benefits? The big companies who’ll buy the roads up, of course. Who else?

The roads still have to be paid for (someone has still got to pay for the improvements), but the wealthy will now pay very much less than they would via a progressive system of taxation. Those down the income scale will now be paying more, with the poorest having to paying the highest proportion of their income. Either that, or else they must abandon the decent roads to wealthier folk.