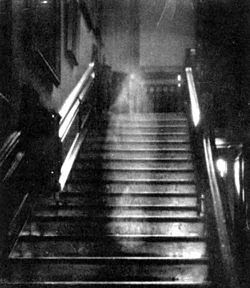 CFI UK and The Ethical Society present:
BEYOND THE VEIL – A CLOSER LOOK AT SPIRITS, MEDIUMS AND GHOSTS
Arranged by Stephen Law (Provost CFI UK)

Spirits on the brain: Insights from psychology and neuroscience

Chris French is a Professor of Psychology and Head of the Anomalistic Psychology Research Unit at Goldsmiths, University of London. He is a Distinguished Supporter of the British Humanist Association and former editor of the Skeptic.

Belief in spirits can be found in all human societies and a substantial proportion of the population claim to have had direct contact with a spiritual realm beyond ordinary experience. This talk presents an overview of scientific research into sleep paralysis, near-death/out-of-body experiences and reincarnation claims in support of the claim that such topics can be understood without recourse to paranormal explanations.

‘Is there anybody there?’

A ghost hunter that doesn’t hunt for ghosts, Hayley Stevens has been researching paranormal reports since 2005. She is the co-host of the Righteous Indignation Podcast, blogs at ‘Hayley is a Ghost’, occasionally writes for numerous publications, and has spoken internationally about ghosts and critical thinking.

As someone who used to actively hunt for proof that ghosts existed, Hayley has first hand experience with the weird and scary lengths that ghost hunters will go to, to contact the dead and prove they exist in spirit form. ‘Is there anybody there?’ will give insight into the modern world of ghost hunting where a scientific approach is more likely to be an updated version of seance parlour antics – from the evolution of table tipping, to the revolution of the Ghost busting Smart phone apps.

Paul has been a professional trickster for almost thirty years during that period has appeared countless times as performer, presenter and pundit on numerous TV shows across many genres. As someone who spent a brief period (in his admittedly misguided youth) as a fortune-teller and ‘psychic’, and as a lifelong student of cons, scams and swindles, he is well qualified to talk about the current crop of mediums and the media bias towards their promotion. He would like to take the precaution of prefacing his entire talk with the word ‘allegedly’.

A mild rant about TV mediums and the similarity to their predecessors of a century ago.

Richard Wiseman is the Professor for the Public Understanding of Psychology at the University of Hertfordshire. He has been active in the skeptical movement for many a year, does Twitter stuff, has recently written ‘Paranormality: Why we see what isn’t there’, and likes dogs.

Do ghosts really exist? What actually happens at seances? How do you go about testing mediums? Why do these sorts of paragraphs often involve a long list of questions? All of this and more will be revealed in an exciting talk that will dig deep into the psychology of belief. Free packet of peanuts for the best question.

You Are The Magic

Ian Rowland is a writer and entertainer with an interest in various aspects of how the mind works or sometimes doesn’t. He taught FBI agents how to be persuasive, and taught Derren Brown how to read fortunes. In America, in front of 10 million TV viewers, he proved that he could talk to dead people – or at least fake it well enough to convince complete strangers. He knows an awful lot about cold reading (look it up), but tries not to drone on about it at parties. He is good at drinking tea and waiting for interesting invitations to come his way. Ian will perform a few miracles, just because he can and it’s fun, while explaining the truth about psychic powers, miraculous gifts and the afterlife. He will also demonstrate that you are just a little bit more magical and miraculous than you may realise.