Categories Menu
Home » books » Believing Bullshit published in the US

Believing Bullshit published in the US 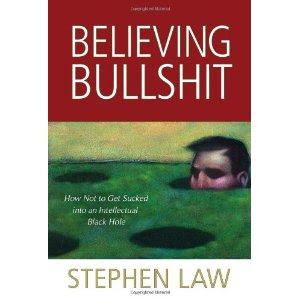 I had not realized that Believing Bulshit is already out in the US. The amazon.com page is here.

Someone left a flattering review with a “but” which is possibly fair enough.

Wacky belief systems abound. Members of the Heavens Gate suicide cult believed they were taking a ride to heaven on board a UFO. Muslim suicide bombers expect to be greeted after death by 72 virgins. And many fundamentalist Christians insist the entire universe is just 6,000 years old. Of course its not only cults and religions that promote bizarre beliefs significant numbers of people believe that aliens built the pyramids. How do such preposterous views succeed in entrenching themselves in the minds of sane, intelligent, educated people and turn them into the willing slaves of claptrap? Believing Bullshit is a witty and insightful critique that will help immunize readers against the wiles of cultists, religious and political zealots, conspiracy theorists, and various other nutcases by clearly setting out the tricks of the trade by which such insidious belief systems are created and sustained.