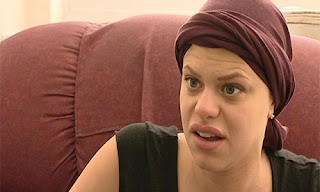 …is the headline of today’s Daily Star. Non-Brits may not know that Jade Goody is a celeberity known for her appearances on Big Brother. She became notorious second time round for calling an Asian actress called Shilpa Shetty “Shilpa Popadom” – which resulted in her being branded a racist chav. Jade is certainly pretty poorly educated.

Anyway, Jade, now 27, was then diagnosed with cancer, and then terminal cancer. She has two young boys, and got married this weekend to her partner Jack. Her imminent early death is a tragedy, and it’s being covered in pretty much every newspaper (orchestrated by PR guru Max Clifford).

“Jade Goody is having secret healing sessions in a final bid to beat the cancer that is overwhelming her body – with amazing results, she revealed last night.”

“…her condition took an immediate positive turn after the the first session with a mystery New Age ‘healing hands’ spiritualist. And his actions had such a profound effect medics are talking up the prospects of restarting chemotherapy to stop her cancer spreading.”

“Jade also talked about embracing religion, saying ‘I’m still reading my Bible. I take a lot of comfort from it, which is why I decided to get the boys Christened. I want them to know I’ll be in heaven watching over them.”

I wonder how much of this story has been invented (the bit about medics, I’m guessing)? Perhaps Jade is using the healer to reduce pain, but the spin put on the story (“new hope for life”, “beat the cnacer”, “little miracle”, etc.) is – she’s hoping for a miracle cure.