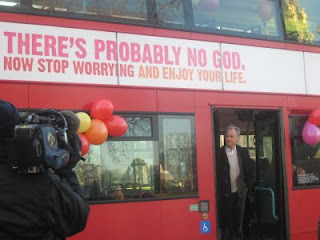 “Advertisements are not allowed to mislead consumers. This means that advertisers must hold evidence to prove the claims they make about their products or services before an ad appears.”

The above complaint resulted in this verdict:

“The ASA council concluded that the ad was an expression of the advertiser’s opinion and that the claims in it were not capable of objective substantiation. Although the ASA acknowledges that the content of the ad would be at odds with the beliefs of many, it concluded that it was unlikely to mislead or to cause serious or widespread offence.”

I disagree with this verdict because I believe the claim on the buses is capable of objective substantiation. Indeed, it’s substantiated.