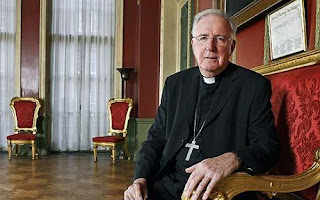 Thanks to anticant for this ink to a Telegraph article.

Britain’s most senior Catholic leader says that the “unfriendly climate for people of all faiths” has united the country’s three major faiths, Christianity, Judaism and Islam.

However, he claims that Catholicism has borne the brunt of “liberal hostility” in its battles to fight for values it considers to be “fundamental pillars of a rightly ordered society”.

“The vocal minority who argue that religion has no role in modern British society portray Catholic teaching on the family as prejudiced and intolerant to those pursuing alternatives,” he says.

In particular, the cardinal highlights the Church’s opposition to liberal laws on abortion and homosexuality, its defence of faith schools and its support for marriage.