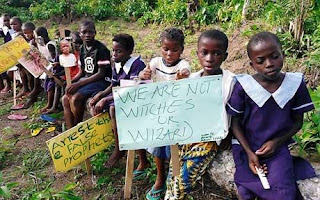 This is a very disturbing story…

“Any Christian would look at the situation that is going on here and just be absolutely outraged that they were using the teachings of Jesus Christ to exploit and abuse innocent children,” says Mr Foxcroft whose expose of what he describes as “an absolute scandal” will be screened in a Channel 4 documentary on Wednesday.

Post Script 10/11/08 – as this article says, a Government-funded report in 2006 found 38 cases of this kind of abuse in the UK. If there were 38 known cases, imagine how many were unknown to authorities.

Many. Two charities are donating £450,000 to help African children in the UK who are accused of witchcraft and abused.

Anticant (see comment below) is right – the Victoria Climbie case was one of them (a little girl tortured to death in the UK by her relatives – 128 separate injuries on her body on the day she died). For some reason, the religious aspect of the Climbie case was not widely reported in the media. The relatives who killed Victoria were consulting the pastor of the Universal Church of the Kingdom of God (based in Finsbury Park – regular congregations of 500+) for advice, even just days before she died.

The pastor was certainly a great help (as BBC reports):

The youngster was taken to a “deliverance from witchcraft” service before seeing the pastor the next day.

The trio returned to the church five days later – the day before Victoria’s death.

On this visit the pastor admitted to the inquiry he had suspicions the young girl was being neglected.

He described how Victoria’s eyes were opening and closing as though she was fainting, and she was cold and wet […]

Asked what the demons were making her do, he said: “Wetting herself, soiling the whole house, prostituting herself (in the Ivory Coast), putting faeces in food and cockroaches on everything she could find.”

He said at the time he believed the little girl was possessed.

“Possession is something we learn from the Bible. I generally do not question the Bible,” he said.

One moral I think we can again draw here is, whatever the merits of religion – and it has some! – it does have this extraordinary ability to get educated, “civilized” people to believe and do very stupid – and indeed cruel – things. What other kind of belief system could get modern British citizens to torture children – even torture them to death – while thinking they were doing the right thing? There’s certainly something “special” about religion – something that ought to make us treat it with very great care (like nuclear power, I suggest)

Climbie’s murders were presented by the press as inhuman monsters. The truth is they were probably just very frightened and confused people (imagine how scared you would feel if you genuinely believed there was a demon living in your house – in the body of your niece) whose religious convictions took them down into a spiral of faith-driven cruelty – the more they abused Victoria, the more disturbed and “possessed” she seemed, requiring still more desperate measures of abuse to help her, until finally Victoria was dead. The fact that they were clearly desperately seeking help from their Church right to the end has my tears welling up in pity, not just for Victoria, but for them.

Post post post script 11th Nov – ok the Aunt and Manning were sadistic arseholes. Maybe they don’t deserve any pity at all. The “possession” element does seem to have been a factor, nevertheless (as it certainly is in many cases of abuse even in the UK).

Correction: the report from the DFES available here makes it clear the 38 cases officially identified were from Jan 2000 to 2006, not just 2006. These were weeded out from an original 74 cases.