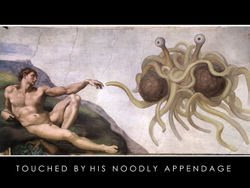 You have to pity the modern atheist who attempts to present arguments for her cause. Unmoored from any respectable intellectual tradition, each generation is forced to recreate anti-theistic arguments from scratch. The result is that the claims which they believe to be clever and damning often turn out to be, to use a technical philosophical phrase, just plain silly. Take for example, the Flying Spaghetti Monster. According to Wikipedia, The Flying Spaghetti Monster is the deity of a parody religion founded in 2005 by Oregon State University physics graduate Bobby Henderson to protest the decision by the Kansas State Board of Education to require the teaching of intelligent design as an alternative to biological evolution. In an open letter sent to the education board, Henderson professes belief in a supernatural Creator called the Flying Spaghetti Monster, which resembles spaghetti and meatballs. He furthermore calls for the “Pastafarian” theory of creation to be taught in science classrooms, essentially invoking a reductio ad absurdum argument against the teaching of intelligent design. (The FSM has been popularized by the otherwise charming and intelligent folks at BoingBoing.) What Henderson actually showed was (a) a profound ignorance of the design argument, (b) a profound ignorance of what the Kansas board was actually proposing, and (c) that OSU should require physics graduates to take courses in philosophy. But what Henderson was trying to get at, though he doesn’t seem clever enough to grasp his own point, is similar to what Bertrand Russell was arguing with his “celestial teapot” analogy…. [continues here or if that doesn’t work, here: http://www.evangelicaloutpost.com/archives/2008/06/celestial-teapo-1.html]

The critic seems confused. Russell’s teapot analogy is, I think, designed to show that the fact that something is possible (not disproved beyond all doubt) does not make it reasonable (or even, not unreasonable: the teapot hypothesis remains very unreasonable indeed!). It’s also designed to illustrate this point (in Russell’s own words):

If, however, the existence of such a teapot were affirmed in ancient books, taught as the sacred truth every Sunday, and instilled into the minds of children at school, hesitation to believe in its existence would become a mark of eccentricity and entitle the doubter to the attentions of the psychiatrist in an enlightened age or of the Inquisitor in an earlier time.

The FSM analogy, on the other hand, is focussed specifically on design arguments, and is, as Wikipedia here explains, designed to bring out that, even if design arguments are good, it’s a huge further leap to the conclusion that the designer is the Judeo-Christian God, rather than, say, a flying spaghetti monster.

The religion was founded in 2005 by Bobby Henderson to protest the decision by the Kansas State Board of Education to require the teaching of intelligent design as an alternative to biological evolution. Because intelligent design implies the existence of an intelligent, but not necessarily omnipotent or omniscient designer, some, like Henderson, argued that this designer could, in fact, be anything imaginable.

That point, it seems to me, is sound*, and the author of the EO piece seems to miss it. Or do they? I can’t tell.

Henderson threatened to sue if ID was included on the Kansas curriculum but the FSG hypothesis was not.