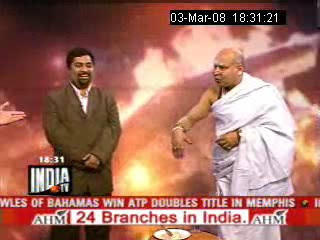 Sally Morgan, the gifted psychic who appears in her own TV show (her website here offers live readings by one of her “hand picked psychics” for £1.50 per minute – note the disclaimer “entertainment purposes only”) could easily pick up over two million dollars in prize money. On TV, Sally can provide quite astonishing bits of information. I was particularly impressed with the way she could pair six or seven dogs with their owners, without any prior knowledge of either.

Yet, despite the fact that Sally, and countless other spectacularly gifted psychics, demonstrate these abilities, very very few submit themselves to scientific scrutiny. None whatsoever have ever passed James Randi’s (magician and psychic debunker) $1,000,000 challenge.

The challenge is simple: demonstrate your occult power under proper scientific scrutiny, and win. The form of the test is to be determined by an independent scientific body, to be approved by both the Randi organization and also the subject.

I have to say I much admire Randi’s guts in putting his money where his mouth is.

The foundation wants to provide the public with the TRUTH about “psychics” such as Sylvia Browne so that she doesn’t take advantage of grieving families. This is why James Randi publicly challenged Sylvia Browne for the Million Dollar Psychic Challenge in 2001. With a proper double blind test Randi wanted to prove that her so called powers were no more then a guessing game. In March of 2001 she accepted the challenge on Larry King Live, and on September 3, 2001 she accepted the protocol for the test. To date Sylvia has not contacted Randi to make arrangements to take the test and claim her million dollars. Her best excuse, “I don’t know how to get hold of Randi”. Hmm, how about a phone book, or a google search for R-A-N-D-I. (source here)

Fact is, Randi, as a former magician, and sceptic, knows that no one is ever going to win that million bucks. Currently, there’s more than another million dollars on offer from various other sceptical sources. Rather than charging punters a piffling £1.50 a minute for phoning her “hand picked psychics” (are they based at a psychic call centre, I wonder?), Sally could simply take the challenge and (if she’s as good as her TV show makes her seem) clean up! So why doesn’t she?

The magician Harry Houdini also offered a challenge, to communicate with him posthumously, and receive a secret message which, when presented to the Houdini estate, would win you a prize. Despite there being hundreds – perhaps thousands – of psychics communicating for cash with people’s dead relatives on a daily basis, none ever won the prize.

But perhaps the gutsiest challenge comes from Sanal Edamaruku, an Indian rationalist who spent years debunking his country’s superstitions. Frustrated at the continuing gullibility of so many Indians, he simply challenged India’s foremost black magician Pandit Surinder Sharma to kill him on TV. Millions watched as Sharma unleashed his psychic forces on Edamauku (see image above) with absolutely no effect whatsoever….

Finally, the disgraced tantrik tried to save his face by claiming that there was a never-failing special black magic for ultimate destruction, which could, however, only been done at night. Bad luck again, he did not get away with this, but was challenged to prove his claim this very night in another “breaking news” live program.

During the next three hours, India TV ran announcements for The Great Tantra Challenge that called several hundred million people to their TV sets.

The encounter took place under the open night sky. The tantrik and his two assistants were kindling a fire and staring into the flames. Sanal was in good humour. Once the ultimate magic was invoked, there wouldn’t be any way back, the tantrik warned. Within two minutes, Sanal would get crazy, and one minute later he would scream in pain and die. Didn’t he want to save his life before it was too late? Sanal laughed, and the countdown begun. The tantriks chanted their “Om lingalingalingalinga, kilikilikili….” followed by ever changing cascades of strange words and sounds. The speed increased hysterically. They threw all kinds of magic ingredients into the flames that produced changing colours, crackling and fizzling sounds and white smoke. While chanting, the tantrik came close to Sanal, moved his hands in front of him and touched him, but was called back by the anchor. After the earlier covert attempts of the tantrik to use force against Sanal, he was warned to keep distance and avoid touching Sanal. But the tantrik “forgot” this rule again and again.

Now the tantrik wrote Sanal’s name on a sheet of paper, tore it into small pieces, dipped them into a pot with boiling butter oil and threw them dramatically into the flames. Nothing happened. Singing and singing, he sprinkled water on Sanal, mopped a bunch of peacock feathers over his head, threw mustard seed into the fire and other outlandish things more. Sanal smiled, nothing happened, and time was running out. Only seven more minutes before midnight, the tantrik decided to use his ultimate weapon: the clod of wheat flour dough. He kneaded it and powdered it with mysterious ingredients, then asked Sanal to touch it. Sanal did so, and the grand magic finale begun. The tantrik pierced blunt nails on the dough, then cut it wildly with a knife and threw them into the fire. That moment, Sanal should have broken down. But he did not. He laughed. Forty more seconds, counted the anchor, twenty, ten, five… it’s over! (source here).