The meaning of life – part II 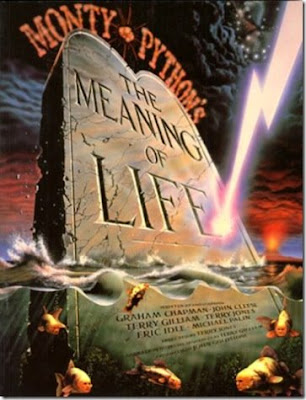 Following on from the previous post on this theme, and your many excellent comments…

When the religious insist God, and only God, can make life meaningful, they often exhibit a pattern of thought that crops up again and again in religious circles. First, they spot a philosophical puzzle regarding e.g. ultimate meaning, or the justification or ground of ethics, or source of existence, or whatever. “What, ultimately, makes things right or wrong?” “What, ultimately, gives life meaning?” etc.

But rarely do they actually explain how God solves the puzzle.

In fact, usually the puzzle is merely postponed, for the same old problem crops up again at the level of God.

That’s what happens with the divine command theory in ethics, for example (Ophelia’s example of the Euthyphro dilemma). The same postponement crops up here too. God is the external something that bestows meaning on our lives, but then, as Rayndeon asks, if meaning requires an external meaning-giver, what bestows meaning on his existence?

Of course, they want to make God the “exception to the rule” so far as, say, the existence of things requiring an external explanation, or an external meaning-giver, or whatever.

But what’s the justification for making God the exception? That’s the bit of explanation they rarely provide (which is not to say it cannot be provided).

“God just does explain it”, they say, without bothering to explain how, or indeed, even think about how.

Rather than provide a genuine solution, they just say, in effect, “It’s mysterious God magic! Problem solved!” Then they add – “Now, what’s your solution?”