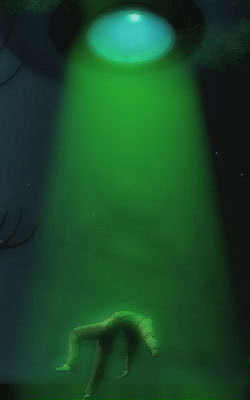 Thanks for the very interesting comments on the previous post.

As you are not all persuaded, I thought I would develop the argument a bit by means of a further analogy.

Very many people claim to have been abducted by aliens. In the U.S. it’s an astonishing number. Aren’t these people justified in taking their experiences at face value? And aren’t we justified in supposing, on the basis of their testimony, that at least some of these subjects have indeed met, been probed by, etc. aliens?

I think not. There are obvious reasons to be sceptical.

First, the power of suggestion is clearly often involved in these experiences. For example, very many abductees claim to have been abducted by a flying saucer. Trouble is, the saucer story originates with a pilot back in 1947. Kenneth Arnold was asked by a reporter what he saw and he said the craft were boomerang shaped and moved like saucers skipped across a pond (they bounced along). The reporter said they looked like saucers, and immediately people started reporting saucers, and have been reporting them ever since. Here is excellent evidence that reports of saucers are at least largely down to the power of suggestion. People see something, then interpret it as a saucer, because that’s what they expect to see. They even describe the saucers in great detail – the little windows, people looking out, etc.

Second, there’s the contradictory nature of the stories. Either we are being visited by very many alien races, or else many of these reports must be mistaken. Sometimes, even witnesses of the same event report it differently. Consider Betty and Barney Hill – one of the most famous abductee cases ever. They described the aliens differently. Betty said they had big noses dark hair and were human looking. Barney said no hair or noses and wrap-around eyes.

Thirdly, there’s the cultural and geographical specificity of the stories. For example, the reports of saucers and abductions pretty much stop at the Mexican border. In Mexico, you get other entirely different weird and wacky claims.

Fourth, given what we know about human beings, their tendency to have weird experiences, etc. means the fact that we find such reports gives us little reason to suppose they are true.

Fifth, there’s very good empirical evidence against the abductee hypothesis. For a start, other civilizations are going to just too far away for regular travel here to be a possibility (even assuming they have close-to-light-speed space ships).

Sixth, there’s not much corroborating evidence. No alien implants removed from beneath the skin, few physical traces of where the craft landed, etc. We just have people’s word for what happened.

6. There’s little or no corroborating evidence for religious experience. We just have to take people’s word for it.

5. There’s very good empirical evidence against the good-God hypothesis – namely the evidential problem of evil (see my The God of Eth, if you are inclined to think the evidence anything less than very powerful indeed).

4. Given what we know about human beings and their tendency to experience weird and wacky things, we should expect such experiences anyway, so the fact people do have them doesn’t give us much grounds for supposing there is any such being.

2. Religious experiences contradict each other. We have experiences which are interpreted to be of one God, of many Gods (the ancient Greeks, Norse, Romans, etc.), that there is no God (many, if not all, Buddhists). Some of these Gods are cruel and vengeful, some demand blood, some are loving and kind, and so on. Take a step back and look at the sweep of human history, and you find a quite extraordinary range of such experiences. Clearly, then, most of them must be substantially deceptive.

1. The power of suggestion – clearly shapes many of these experiences, and largely explains the cultural specificity.

Now, to this, the religious will typically say (and some of you have said):

“Ah but despite the differences between these experiences, there’s a core that’s the same – namely that there is single, good God. We just experience this being in different ways (like flatlanders!)”

But this is pretty obviously false (and it doesn’t become true by being endlessly repeated!) The most we can say is these experiences all purport to reveal that there is “something more“. But as to what this “something” is, well, they disagree on pretty much everything (unless, of course, you gerrymander the set of experiences under consideration – e.g. by air-brushing out the Norse, Greek and Roman pantheons, the Mayan divinities, etc.).

There are at least two further, additional problems for those who place their trust in religious experience.

First, the experience is via a mysterious faculty. At least the abductees are relying on their five senses, which we do know exist, and are pretty reliable.

So now explain to me why I, or you, should take religious experiences significantly more seriously than stories of alien abduction (which I consider a bit of a joke, frankly).