Posted by Stephen Law on Mar 7, 2008 in mystical experiences | 47 comments 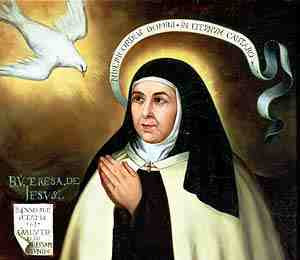 What is it like to be a true believer?

For many, it’s something like a perceptual experience – like just directly seeing that there’s an orange on the table in front of them, say.

If you ask them why they believe, then of course they may give reasons and justifications of one sort or another. But even if such grounds for believing are provided, typically, not that much weight is placed on them. Such evidence, the theist may say, is not what really explains why they believe. They don’t infer that God exists from evidence. Rather, they “just know”. They directly experience God, perhaps in something like the way I just directly experience that orange on the table in front of me. To them, it is as obvious as that (perhaps even more obvious than that) that God is present. When they look at the world, it seems perfectly clear to them that it’s imbued with a divine presence. They may even find themselves baffled that you can’t sense this presence.

So what’s going on here?

First, we might offer Jane’s reasons and justifications – the grounds of her belief that she herself might cite. Why does Jane believe the Republicans will lose the next election? Because she has seen the opinion polls and knows that the causes of the current Republican slump – such as Iraq – are unlikely to disappear in the near future. So, infers Jane on the basis of this evidence, the Republicans will probably lose.

But that’s not the only way in which we might explain a belief. Suppose Bert believes he is a teapot. Why? Because Bert attended a hypnotist’s stage-show last night. Bert was pulled out of the audience and hypnotized into believing he is a teapot. The hypnotist forgot to un-hypnotize him, and so Bert is still stuck with that belief.

Of course, Bert need not be aware of the true explanation of why he believes he is a teapot. He may not remember being hypnotized. If we ask Bert to justify his belief, he may find himself unable. He may simply find himself stuck with it. He may well say, with utter conviction, that he just knows he is a teapot.

In fact, because such non-inferentially-held beliefs are usually perceptual beliefs, it may seem to Bert that he can see he’s a teapot. “Look!” he may say, sticking out his arms “Can’t you see? Here’s my handle and here’s my spout!” In fact, Bert may be slightly baffled that you can’t see it too.

So we can explain beliefs by giving a person’s own easons, grounds and justifications, and we can explain beliefs by giving purely causal explanations (I say purely causal, as perhaps reasons are causes too). Purely causal explanations include, say, being hypnotized or brainwashed, or caving in to peer pressure. They may also include being genetically predisposed to having certain sorts of belief.

Note that not all causal mechanisms are unreliable when it comes to producing true beliefs. Hypnotism, brainwashing and so on aren’t reliable, of course. They can just as easily be used to induce false beliefs as true ones. However, our perceptual mechanisms, such as sight, are, it seems, pretty reliable when it comes to producing true beliefs (occasionally they mislead us, but not that often; generally speaking things are as they appear to be). If my eyes are open and the the lights are on, and you put an orange on the table in front of me, that will cause me to believe theres an orange there. Take it away, and that will cause me to believe the orange is gone.

According to the simple reliabilist theory of knowledge, I can know that P if my belief that P is produced by the state of affairs P via a reliable mechanism.

So, for example, if sight is a reliable belief-forming mechanism, I can know there is an orange on the table in front of me. When I see that orange on the table before me, I may not be able to give give grounds for inferring the orange is there. I may not be able to inferentially justify my belief. But according to reliabilism, I can still know it’s there. I know it’s there, if there is an orange there, and the orange’s being there is causing me to believe it’s there via a reliable mechanism.

They might be produced in a purely causal way, of course.

For example, we might hypnotize Bert into supposing he is experiencing God.

Or, a belief might be produced via natural selection (this is currently a focus of much interesting research). Having a propensity to religious belief and experience might give an individual or small group an evolutionary advantage. Religious believers are likely to be more committed to a cause, less fearful of laying down their lives in its pursuit, more easily organized by a leader they believe to be divinely ordained, and so on. This may allow groups possessing such a propensity to succeed where competing groups fail.

Another possibility is brainwashing. Take education under totalitarian regimes. Pupils are encouraged to accept uncritically the political tenets of the regime, schools begin each day with the collective singing of political anthems and the repetition of key political beliefs, portraits of political leaders beam down from classroom walls, and son. By means of emotional manipulation, peer pressure, repetition, and other purely causal mechanisms, a powerful commitment to a political cause can be fostered, without ever having to provide any justifications for the beliefs at all. Such indoctrination factories (of the sort we find in, say, Stalin’s Russia and Mao’s China) are often accused of “brainwashing” children.

But if we cross out “political” and write “religious”, then of course we find such schools up and down the country. The same kind of purely causal techniques are applied.

If you have been on the receiving end of such causal mechanisms, with the result that you are now a true believer, you may, like Bert, who was hypnotized into believing he’s a teapot, find yourself in an odd position.

Just like Bert, you find you cannot justify what you believe. You simply find yourself “stuck” with the belief. You’ll probably say that you “just know” that God exists. Indeed, because such non-inferentially arrived at beliefs are typically perceptual beliefs, it may seem to you that you can just directly perceive that God exists. So we have here a possible explanation of at least some religious experiences.

The question is, are these sorts of explanation correct?

Or is the correct explanation of at least some religious experiences that they are genuinely of God, produced by a reliable quasi-perceptual mechanism, such as Plantinga’s sensus divinitatis?

Note that, if the simple reliabilist theory of knowledge is correct, a religious person can correctly insist he may just know that God exists, even if he cannot justify his belief! He can still be a knower if he has a reliable belief-forming mechanism – a sensus divinitatis – and that mechanism is producing this belief.

I also pointed out that these experiences also contradict each other (so we know that very many must be at least in large part delusory), and that there is, in addition, overwhelming evidence that there is no Judeo-Christian God (the problem of evil).

That’s what many “reformed epistemologists” like Alston and Plantinga suppose. But I’d suggest I am not justified. Me taking my religious experience at face value, it seems to me, is not like, say, me taking my experience of there being an orange on the table in front of me at face value.

It’s more like the case of someone who takes such an experience at face value, even after they (i) discover that they were at a magic show at which a great many illusions and false beliefs were generated, and (ii) are given very good grounds for thinking there was no orange there. That person might have been lucky enough to have seen a real orange (so they may, in Plantinga’s sense, be externally “warranted” in holding the belief [indeed, according to the simple reliabilist theory, they know there was an orange there]). But they are not justified or rational in continuing to believe they saw a real orange. Are they?

In which case, whether or not there’s a God, or indeed, whether or not we are equipped with a sensus divinitatis, we are not rational or justified in believing God exists.

Not even if we are happen to have had such experiences.