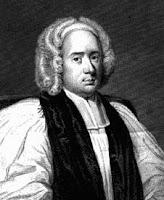 I’ll be reading a paper that develops my “evil god hypothesis” in some detail (it’s a work in progress, so the discussion will be useful).

For a brief and breezy intro to the main idea, see my The God of Eth.