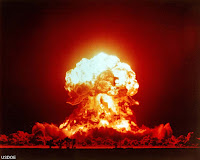 Lots of interesting points being made here (especially in your comments on last three posts) – I won’t try to address them all.

Seems to me one of the biggest issues you raise concerns the use of reason. Here’s a popular argument for general scepticism:

So, all beliefs are equally irrational!

Moreoever, if, to qualify as knowledge, a belief must be justified, knowledge is impossible too.

Suppose I am involved in a debate – and I’m struggling to make my case. In fact, my opponent seems to have shown I’m wrong. Oh dear. What do I do?

I might be tempted to make just this sceptical move. It offers a wonderful “get out of jail” card. I give the sceptical argument outlined above and conclude: “So you see? – both our positions are, in the last analysis, equally (ir)rational!”

Once I play the sceptical card, all my opponent’s hard work in constructing arguments against my position counts for nothing. At one stroke, they are all demolished.

I can now walk away with my head held high, having “established” that my position is no less reasonable than my opponent’s!

Now Ibrahim, when people criticise Islam, and also your approach to religious education, you do, it seems to me, sometimes play this sort of sceptical card.

That’s OK. But bare in mind that in such discussions, playing the sceptical card really is “the nuclear option”. You avoid defeat, yes, but only by utterly annihilating the rationality of every position. All positions, no matter how sensible or nuts, come out as equally (ir)rational!

You must now say: “Hey, that the Earth is flat, that the earth is round, that milk makes people fly, that it doesn’t, that astrology is true, that is isn’t, that Mohammed is God’s prophet, that he isn’t – all these beliefs are equally (un)reasonable!

Now, is that what you really want to say? I guess not, but I am not sure.

But that seems to be exactly what you have just done, in fact (you just suggested if you don’t fill kids heads with Islam, they’ll get filled with something far more pernicious – that’s an argument).

When I offer arguments against encouraging mindless, uncritical acceptance of Islam, you go nuclear. But then, five minutes later, I find you offering an argument in support of your own position. There’s a lack of consistency here, surely? You’re not playing fair!

Indeed, the fact that you do continue to use reason wherever you think it supports your case – and also in everyday life, when you rely on it almost every minute (indeed, you constantly trust your life to it) – shows that playing the sceptical card is, in truth, merely a rhetorical ploy. You don’t really believe what you’re saying about reason. You are saying it just to raise enough dust and confusion to make quick your escape. Or so it seems to me!

The point of my astrology example needs spelling out. I have two questions:

I’m particularly keen to get answers to these two questions, Ibrahim, if you’ve got the time.