US Politicians’ “thoughts and prayers” after massacres: Igor Volsky and gun control

What looks to be a result of terrorist activity is still another mass shooting eased in its execution by some of the most lax gun rules in the world, and certainly in the developed world. In reaction to the San Bernardino shootings, there has been a marked difference between the political statements made by politicians in the US. On the Democratic side, there have been renewed calls for action, for tangible changes to be made to gun legislation. The Republicans, on the other hand, offer mere “thoughts and prayers”.

This call for thoughts and prayers has now been termed as “prayer-shaming”. Why? Because such weak reactions to the 355th mass shooting of the year in the US appears to be correlated to, and caused by, the fact that these Republican politicians receive not insignificant monies from the gun lobby group, the NRA (National Rifle Association). 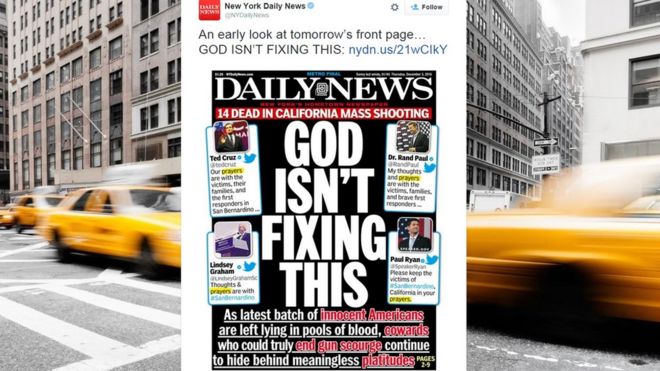 As the BBC reported:

“Your “thoughts” should be about steps to take to stop this carnage. Your “prayers” should be for forgiveness if you do nothing – again,” tweeted Senator Chris Murphy, a Democrat. He represents the state of Connecticut, where 28 people, mostly children, were killed in the Sandy Hook shootings.

A plan for gun reform was put forth by President Barack Obama after that tragedy, but failed to pass Congress.

ThinkProgress reporter Igor Volsky retweeted politicians who offered “thoughts and prayers,” adding to each tweet the campaign contributions they received from the National Rifle Association.

This has now morphed into a back and forth between pro-prayerists and pro-gun controlists. I have written, myself, on the issue with prayer and public calls to it (with regard to the Paris massacre).

This is what Igo Volsky has said, and it is well worth watching:

Independent expenditures, as you can see, for the NRA in 2014 came to over a staggering $30.5 million.

The fundamentalists are going crazy over this. No, not the Islamists, silly, the Republican, gun-toting American fundies! Twitter is afire. Indeed, as Volsky tweeted:

A caller I just spoke to on @bpshow argued that it’s okay to have lots of easily accessible guns b/c most of them are used in suicides.

Indeed, Jeb Bush, whose state has profited form the NRA monies, doesn’t appear to think anything need be done: https://www.youtube.com/watch?v=_z6OvehI584&feature=youtu.be Volsky is naming and shaming those Republican politicians who have voted against change:

This was a particularly large donation, but the list is shocking.

Volsky is bang on. This is the problem at the core of US politics and policy-making. If they don’t regulate lobbying, then all you get is policies which favour the largest payer.

Or, more accurately, hope and change doesn’t happen on a wing and a prayer, not when there’s bling and a high payer.