48 fishermen have their throats slit by Boko Haram

I have reported a few of these recently. One might think I am picking on Islam. But there is no other worldview or religion which is inspiring such mass killings. From 8 people being shot in the head in Kenya for not being able to recite the Qu’ran, to ISIS going nuts in the Middle East. I know a lot of liberal apologists (and as I say, I am generally as liberal as they come) point to other causal factors and try to blame the West and geo-political scenarios. But this is simply death for infidels in parts of Africa over which the West has little power, or at least not in the way that would inspire this kind of activity.

On Wednesday, 45 people were killed in another Boko Haram attack in Doron Baga.

The actions of these Islamist groups IS atrocious.

The action should be twofold:

As the BBC reported:

Islamist militants from Nigeria’s Boko Haram have reportedly killed 48 people in an attack on fish sellers near the border with Chad.

A fish traders’ group said some victims had their throats slit whilst others were tied up and drowned in Lake Chad.

The attack took place on Thursday, but the news took several days to come to light because Boko Haram has destroyed mobile phone masts in the area.

It was the second major attack in two days by Boko Haram.

In Thursday’s attack, the traders were on their way to Chad to buy fish when militants blocked their path near the village of Doron Baga, some 180km (112 miles) north of Maiduguri in Borno state.

Abubakar Gamandi, the head of the fish sellers’ association, said the militants had used no guns.

“The attackers killed their victims silently without the use of the gun to avoid attracting attention from the multi-national troops,” he told AFP news agency.

Troops from Nigeria, Chad and Niger have been deployed to the area and have a base at Doron Baga, but the military task force has had little impact, says the BBC’s Will Ross in Lagos.

In this attack too, victims’ hands were tied behind their backs and their throats were slit. The attack was apparently aimed at punishing the community after four insurgents were pointed out to soldiers and were shot dead.

Boko Haram has been waging an insurgency in Nigeria since 2009.

It has stepped up attacks against civilian targets since the Nigerian military launched an offensive against the group last year. 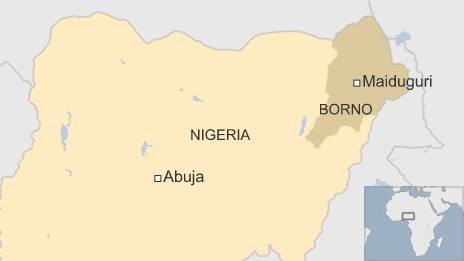