Review of Justin Schieber vs Max Andrews: Does the God of Christianity Exist?

I have recently listened to a really interesting debate between Justin Schieber of the rather excellent Reasonable Doubts podcast and Max Andrews. Andrews writes at Senentias.org and I believe may be some sort of ‘backroom staff’ for William Lane Craig. His bio is:

The debate description is as follows:

Does the God of Christianity Exist?   This debate was not a live debate, rather it was a series of audio exchanges that took place through the months of June and July of 2013 between Max Andrews of (Sententias.org) and Schieber Schieber (Doubtcast.org). The exchanges were according to agreed upon time limitations on each section. For each of their several sections, the debaters were given at least a week to analyze, script and record their entries before submitting it to their opponent. Each submission, has been edited together in the agreed upon order for your listening interest. As one speaker ends, the next will follow without interruption.

Now, first off, I am a big fan of these styles of debates because, being pre-written and prepared, and resulting from examining carefully what the adversary is getting at before replying, means that the debates become about content over style, about substantive points rather than rhetorical point-scoring. I was asked myself by the RD team to do such a debate in arguing with Randal Rauser over the historicity of the Nativity. 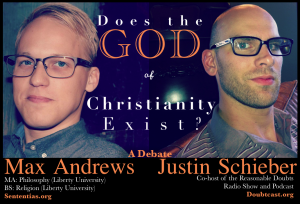 These were the three arguments which the debaters were putting forward to support their worldviews:

Andrews trots out the same tired old clichéd arguments as if they haven’t been refuted before, and straight away this shows a difference between the two. Schieber is being original, Andrews is relying on tired arguments to do things they are no longer qualified to do (or ever were).

I think that Schieber quite clearly wins this debate. He engages both Andrews’ arguments and his opponents’ counter-points to his own arguments with far more rigour and, indeed, understanding than Andrews himself does.

Schieber goes for the killer argument, in my mind, of why God would create at all. I started my last public talk with this because if you can’t get past this, then there is nowhere else to go. The Creation of Non-God Objects was not refuted in any sort of way by Andrews and was left uncomfortably on the table, particularly with regard to intentionality without time. Schieber then narrowed down his attack by looking specifically at Christian claims, as we shall see later.

One particularly telling aspect was that whilst Schieber was rigorous enough to prepare his case by researching what Andrews had claimed in the past in some of his work, Andrews was not prepared to do the same and showed no knowledge of Schieber’s previous work, such as the case against martyrdom recently on Reasonable Doubts.

As mentioned, Andrews’ arguments appeared tired and problematic, and his voice was even tired, as if he was bored to be doing what he was. There may have been recording reasons for this, but it did appear odd.

That said, there was a lot of interest in this debate and I will mention a few highlights.

The Divine Lies Argument. Schieber’s argument was clever here and I don’t think Andrews understood why, or why it was used, claiming it was irrelevant and off-topic. This was an oversight. The cleverness was in the dilemma which ensues. The argument goes something like this:

Apologies if that is a poor rendition. The great thing is that this either invalidates the arguments from the Bible, or by negating them, invalidates the logic used in all theodicies. It is good because it provides a catch 22 for Christians. As Schieber himself says:

“First, recall that Mr. Andrews avoids the noseeum inference in the evidential problem of evil by saying that we are not in a privileged spacio-temporal position and so we shouldn’t expect to have epistemic access to the kinds of justifications God has for allowing certain evils – like children starving to death – to occur. I applauded Mr. Andrews for a strong view that lines up well with revealed scripture and is in great intellectual company.

I then noted that this has unwanted consequences. To be consistent, Mr. Andrews must agree that he is ALSO not in a position to know whether God has morally sufficient reasons beyond his understanding to lie to us in revealed scripture. This would of course prevent Mr. Andrews from being in a position to know that any claim with biblical justification only is ACTUALLY true.

Max responded by saying that it would contradict God’s moral perfection to lie. But when did God grant Mr. Andrews this special knowledge about the logical entailments of God’s moral perfection? Given Andrews‘ skeptical theism, he is left with little more than his moral feelings that lying is always wrong. Yet, presumably Mr. Andrews has much more potent intuitions about whether it is always wrong to allow children to starve to death as his God regularly does. If Mr. Andrews wants to appeal to skeptical theism when faced with questions about God’s potential justification for doing nothing while children are starving to death, then, as a matter of proper consistency, he must also be epistemically humble when faced with questions about whether or not there exists a greater good beyond his understanding that justifies his God in lying to him about the necessary and sufficient conditions to be saved. All those claims to which Max confidently subscribes to but which only have biblical justification are claims whose truth or falsity Max can have no knowledge of.”

And Andrews didn’t quite get this or deal with it. The relevance is clear in seeing Schieber drive a wedge between evidence for God and the evidence for a particular god. The idea is that the Bible presents the most cogent and explicit evidence for the Judeo-Christian God and when it is epistemically undermined in such a way, serious skepticism ensues.

And then when hell is so well undermined in the classic argument that I first heard Ray Bradley argue gives further damage to the JC hypothesis. It is not just hell which is undermined, but any kind of negative judgement with any kind of consequence which is undermined. Actually, one could take this argument further and state that God needn’t create at all if he knew the counterfactuals of all people who would freely love him and those who would freely reject him. If he knew this and the experiences of this in advance, then he can just live with that knowledge rather than creating them in order that they may suffer, eternally or not. I would like to have seen Schieber follow his argument to this conclusion, as it is even more devastating.

Andrews offered the cosmological argument for a prime mover. I have written enough about this, and Justin does a good job in refuting it. Counter Apologist states, of this part of the debate:

Justin turned Max’s first argument around and flipped it into yet another argument against theism.  He points out that an atheist is perfectly willing to accept the existence of something that is metaphysically necessary, so long as it is not something that is an agent.  He then goes on to show the problems that come up when you try to post an agent-cause of the universe given what we already know about agent causation.  This leaves us with the idea that if there is something that is metaphysically necessary, it very likely is not some kind of an agent cause.

Justin called out Andrews in smuggling in transcendence without defending that.

The Fine-Tuning Argument (FTA) deserves some space. I have problems with this. Firstly, as Schieber pointed out, Andrews did nothing to refute the normalisation of the probability value. By this, I mean that if one is going to use a likelihood argument, this revolves around probabilities. But if there are infinite potential universes, and one is using probability to infer a Creator through fine-tuning of this universe over and above any other possible universe through infinite combinations of constants (upper values are infinite), then one cannot normalise the probability. All probabilities of a given event happening must add up to 1, such that 1/6 chance of rolling a particular number on a die gives six equal chances of 1/6 whose totals add up to 1. But with infinite options, the probability cannot add up to one. This invalidates such a probabilistic argument in this context. This remained unchallenged.

Schieber also points out that, even given the assumption of a Creator in the FTA, we would have no way of knowing that life would be the priority for such a Creator. Andrews supposes that the finely-tuned parameters is more probably explained by a Creator, but that makes HUGE assumptions of the desires and intentions of that Creator, begging the question. Why would a universe finely-tuned for life require need of a Creator whilst a universe finely-tuned for red rocks doesn’t? The argument, then, smuggles in theistic assumptions of life and its importance.

Why, indeed, should life be what is the central tenet of fine-tuning when there are more common things in the universe which appear more easily produced by these constants? Or things which are rarer, even? Unless you can special plead that importance of life, which Schieber’s points out that Matthews does not do, then you are in a problematic area. Of course, there are many other arguments against the FTA that Schieber could have utilised.

What annoyed me is that Schieber had just come off the back of three very comprehensive podcasts unpicking the historicity of the martyrs. Having done this, Andrews actually pulls the martyrs into defending the historicity of the Resurrection (you can’t die for a lie!) without showing any reference to these podcasts. These were the three most recent podcasts on RD, for goodness sake! If Andrews had got off his arse and referred to them, he would have known that his use of martyrs was completely ill-advised and impotent!

I have only skimmed some of these arguments. I advise the reader to listen to the debate in full as there are some interesting arguments, most notably from Schieber. I know this sounds like confirmation bias, but seriously, Schieber seemed to be leagues ahead of where Andrews was, a PhD to be on these subjects no less.

No, a clear Schieber win.