So the whole Jesus’ wife thing has been doing the rounds, and it seems that it is a fake. This article, from The Guardian, confirms through textual analysis that it is indeed so. It appears to rely on a modern typo:

The gospel of Jesus’s wife: a very modern fake 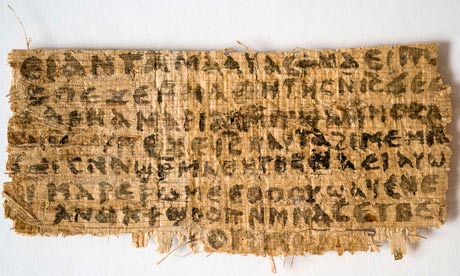 It’s been fairly clear for weeks that the papyrus fragment known as the “gospel of Jesus’s wife” was a modern fake, assembled from phrases found in real gnostic gospels and in particular the Gospel of Thomas, a 4th-century copy of a 2nd-century manuscript. But some astonishing and delightful news has now emerged to show that it was a fake dependent on the most modern technology.

Bernhard accepts that the fragment is a cut-and-paste job made from sections of the authentic gospel of Thomas. What he seems to have shown is the exact copy from which the text was taken. This is the interlinear translation made by Michael Grondin, which is freely available online.

The text is available either as a downloadable PDF file, or as a straight web page, and the PDF version is missing one letter in one of the words reproduced in the Jesus’s wife fragment. The web version does not have this mistake. But the Jesus’s wife fragment does, which shows pretty clearly that it could not have been composed before the PDF was available, no matter how old the papyrus turns out to be on which it was written.

In fact a little poking around in the world of gnostic scholarship shows that there has never been a better time to make your own gospels. Fantastic software tools are freely available: grammars and dictionaries of Coptic and ancient Greek; keyboard layouts to enable them to be easily written on a modern computer; word-by-word translations of the ancient texts so that you can copy (or paste) their styles.

Perhaps it is a universal rule that the easier you make it to study authenticity the easier it becomes to fake it. This will surely not be the last fake gospel fragment to be published, though it may well be the lastendorsed by a Harvard professor.

Meanwhile, the New Yorker alone was brave enough to examine the implications of the fact the Jesus’s wife, had she existed, would undoubtedly have been Jewish. Their Shouts and Murmurs humour column carried her side of the story:

“We were married in a simple, private ceremony in the desert, by a rabbi and someone whom Jesus called a Baptist minister. Right before the vows, the rabbi whispered to me, ‘Think about what you’re doing. Your children will be half Christian.’ Which was when the minister whispered, ‘So what? College isn’t for everyone.'”