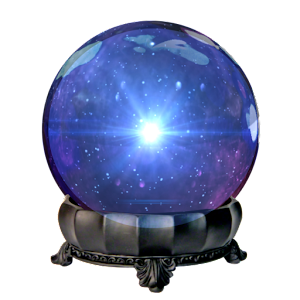 The year 2015 has dawned, and the tabloid prophets have been at it again, telling the world what wonders and disasters to expect in the next twelve months.  But the skeptics have been at it again, too, looking back to the predictions made twelve months ago, to see how well they panned out.  I thought I’d mark the occasion by  revisiting a particular prophet whose less-than-stellar score I documented a couple of years back, to see if he’s doing any better now.  Then I had a look at his 2014 predictions, and a great weariness descended upon my neural network.

Joseph Tittel (Spiritman), medium and podcaster, makes a tradition of rolling out his annual predictions in a special podcast on New Year’s Day, and then, up to several weeks later, publishing a transcript on his blog.  As far as I can tell, his revelations come to him during meditation, in the form of newspaper headlines from the spirit world.  He claims some remarkable hits in past years, including the deaths of Michael Jackson and Heath Ledger, the 2011 earthquake in Japan, the swine flu outbreak in 2009, and the Costa Concordia disaster.  Having been churlish enough to ferret out and compare his original predictions with those claimed fulfilments, I am very much not impressed—but that’s a story for another day.

But why the great neural weariness?  Because the predictions are just so bloody stupid, that’s why.  Vague, scattered, woolly, trivial, useless.  Why do these jokers insist on telling us there will be hurricanes in hurricane season, tornadoes in Tornado Alley, wildfires in Washington State, and earthquakes on the Ring of Fire?  That spoiled-brat heartthrobs will get into trouble, that North Korea will be a pain in the arse, that progress will be made in science and medicine, that somewhere a plane will crash, a dam or bridge will fail, a river will overflow its banks, and some whackjob will shoot up a school or a mall.  We know all that. Those things happen all the time.  They are safe bets—and even so, prophets like Tittel like to hedge their bets every which way.  For example:

When it comes to water, 2014 is going to be a year to remember. We will endure record breaking floods and issues related to water. We will see more significant water related storms, floods and weather related issues than ever recorded in previous history. 2014 will be a very difficult year in the way of weather. Some of these storms will be typhoons that will effect areas such as China, Japan and that region, even including Australia. Russia will also endure major crazy weather related patterns and floods in 2014. Including rivers that overflow.

We will see rain and storms like never before in 2014. These rain storms cause so many issues with floods and damage in places like the west, mid-west & South West (Arizona, New Mexico and California are in the mix). … I see headlines that read 3 people killed in storm. Not sure if these deaths take place together or in different places and times. Other places that will endure very similar weather patterns will include Melbourne, Tasmania and Western Australia, Poland, Indonesia, New Zealand and the Philippines.

In other words, he spreads a very wide net, and notably mentions areas that either suffer catastrophic floods on a regular basis (eg, Indonesia), or suffered catastrophic floods in previous years (eg, Poland, Melbourne, and Russia).   Oddly enough, he does not mention (for example) India and Pakistan, where monsoon-related floods in September killed upwards of 400 and affected 2.5 million people.  The headline regarding a death toll of three seems unambitious by comparison.  Spiritman does, however, regard his prophecy as a hit, in these words:  “Record breaking floods in Russia & Europe with more rain falling than ever. This occurred in Europe and Russia when 4 months of rain fell in one day.”

Nuff said about that one. And to be honest, life is too short to check out all of Tittel’s vague and remarkably stupid predictions; for the sake of my own sanity, I decided to concentrate first on some of those that he personally regards as hits, with comments on a few others.  Here are selections from Spiritman’s list of claimed hits, published on December 27th, with my comments:

*Japan will receive another major earthquake in the next 18 months. They had an 8.9 quake in Northeastern Japan.

No, they did not, but this is an interesting mistake.  Googling “Japan earthquakes 2014” brings up sites like this one, datelined 2014 on the search page, but actually referring to the big 8.9 earthquake and tsunami in 2011.  It looks to me like Tittel did a bit of careless googling. The facts: in 2014, Japan had 333 earthquakes of magnitude 1.5 or greater, topping out at 6.5.

*Danger for the royal family and an assignation (sic) attempt on the Queen. The uncovering of a plot by British police to assassinate the Queen did happen.

This looks impressive until you look at the original prediction, which involves a citizen getting pissed off with the royal family on account of some law, possibly to do with gay marriage, and specifically going after Queenie with a sniper rifle while she’s out on a balcony waving at the populace. The alleged plot actually involved four young Islamists plotting to stab Her Majesty at the Remembrance Day ceremonies, for the usual jihadi reasons. Furthermore, threats against the Queen and other public figures are, alas, nothing out of the ordinary.

Again, superficially impressive—but what Tittel actually predicted was a collision of hot air balloons in Australia or Sweden, sending several people “plunging to their deaths.” His claimed “hit” is a balloon in Virginia hitting a power line and catching fire. None of the other hot-air balloon accidents in 2014 matched Tittel’s vision, either.

*Thousands of fish washing ashore with horrible stench in a warm hot area.  This occurred in Marina Delray and the stench was horrific.

In the last month alone of 2014, about a score of massive fish kills were reported worldwide, and I’m reasonably certain they all smelled terrible.  Predicting that a whole lot of fish will go belly-up in some body of water is a perfectly safe bet, with dozens of hits to choose from over the year.

*Carnival Cruise lines will encounter major issues in 2014. Not a year to take a cruise. This occurred when the Nero virus (sic) broke out on a cruise ship.

The CDC recorded nine outbreaks on international cruise ships in 2014, seven of which involved Norovirus – but none of these took place on Carnival Line ships. For context, 2013 also had nine outbreaks, eight involving Norovirus.

*Elevator wire snaps causing elevator to crash. This happened in Chili (sic) when an elevator crashed.

This one is a great illustration of how wrong a story can be, and still be considered a hit. The actual prediction was this: “An elevator wire snaps sending an elevator of people falling several stories, possible 15 or more stories. The elevator completely shatters even injuring one bystander waiting below for the elevator to arrive. This may occur in New York city but not clear on a location.”  In the incident cited as fulfilling this dramatic and unusually specific prophecy, an elevator malfunctions with one unfortunate passenger inside, and hurtles upwards for thirty stories.  Details, details.

*I see Africa having many issues with riots and protests. This did occur when South Africa was seeing more than 5 protests per day.

Riots and protests in Africa—who’d have thought it?  This would be hilarious, if it were not so tragic. South Africa appears to be the protest capital of the world, and five a day has been business-as-usual for the last ten years or so.  Funny, though, that Tittel did not pick up on the protests surrounding the kidnapping of schoolgirls by Boko Haram, nor the riots surrounding the Ebola outbreak.  In fact, his mystic sources seem to have missed out on those very major news stories altogether.

I could go on and on, but I’m sick to death of wading through Tittel’s terrible prose. So here is a quick summary of the predictions that I considered specific, unambiguous, non-generic, and not patently obvious continuations of events in 2013:

So, out of a possible fifteen, I would award Joseph Tittel two points. Not an impressive score.  I would also be inclined to deduct points for missing out on significant news items that would have made convincing hits, including:

Better luck next time, Spiritman. And to the rest of you, a Happy New Year.