Oral Roberts University was celebrating “spirit day.” As part of the celebration, the folks in charge decided it was a smart idea to release a bald eagle in the chapel to celebrate. Here’s a pic of the bird courtesy of Buzzfeed: 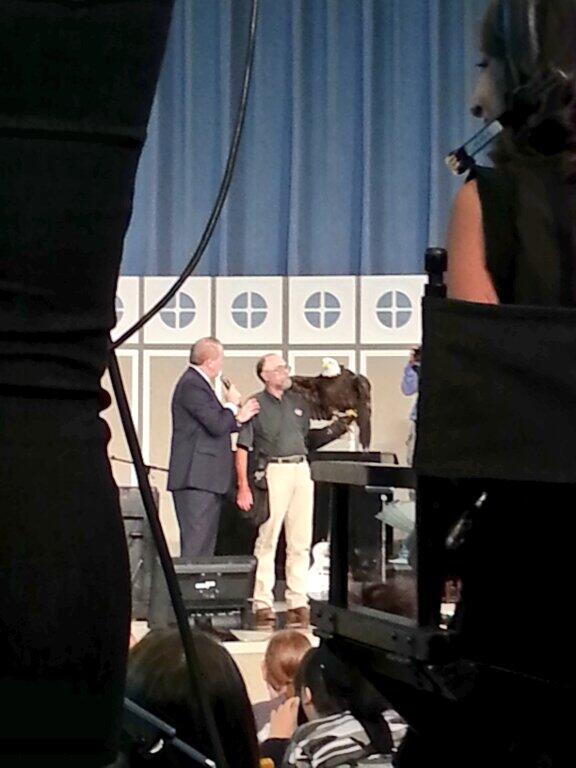 As the college kids chanted “USA, USA,” the eagle circled the chapel until he crashed into a window.

“It was a bit shocking to see, but we’re thankful the eagle is OK,” said ORU spokeswoman Carissa Bratschun.

She said the eagle was supposed to fly straight to the trainer who was standing on stage. Instead, it circled the auditorium.

“It had practiced five or six times,” she said. “When the time came, we’re not sure what happened. It flew around the room and then hit a window.”

Sure, they practiced five or six times. However, did they practice with a packed building of people chanting a patriotic slogan? Good grief. I’m not an eagle expert, but if they’re anything like my dogs I can assume:

1. They’re an animal and thus unpredictable.

2. I can practice a trick with them over and over, but once they’re in front of an audience, all bets are off.

3. I’m supposed to be the smart person so I don’t put my dogs in situations where they can hurt themselves.

But that’s just me.

After the eagle hit the glass, a trainer coaxed the bird onto his arm and they went on stage.

Because the show must go on, eh?

The bird is evidently doing OK. However, I’d advise keeping him out of show business. It’s probably best to let the poor guy be an anonymous bird.

Here’s a vid of the event:

Here’s an update on the bird’s health:

Category: In the News • My Opinion

Tags: In the News • My Opinion