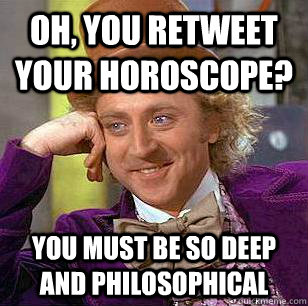 I have something to confess — I have changed the stars! Okay fine, I haven’t really, but you sort of believe me, right? No? Well, fine…..

This may be old news to you gentlemen/women and scholars of GPS but the zodiac has been rearranged. A 13th sign, Ophiuchus, has entered the ranks of Sagittarius, Cancer, and Virgo. At this point, you could be forgiven for thinking “By Zeus, what in the world is happening? My sign has changed!!?” (personally, I quite enjoyed being the physical embodiment of a lion).

Now, you might be thinking “What exactly does this mean for me?” No? Wrong again? Bollocks…

Well, humor me for a moment dear readers. In my earlier post, I gave a brief mention to the slight deviation in the Earth’s axis of rotation that causes it to wobble. More specifically, astronomers observe a slow and continuous shift in the orientation of the Earth’s axis of rotation that is induced by gravity. This phenomenon, known as axial precession, might be best visualized as a wobbling top, and is responsible for the zodiac apocalypse.

“Brace for the worst: You may be a Virgo, scientists say.” Scientists, eh? What scientists? Perhaps they left the pseudo- part out of that? Anyway, as actual scientists, my colleagues and I set out to enlighten our own campus on the woes of pseudoscientific practices. At the astrology booth, we wanted to gauge how many of our fellow students held beliefs in astrology. Seventy-five students (42 female, 35 male) responded to a 6-item questionnaire that attempted to discern whether students thought that the characteristics associated with their sign accurately reflected their personality and whether they considered astrology to be scientific. Of the 75 students, 80% (M = 60) claimed to read a horoscope daily, over 70% (M = 52.5) considered astrology to be “somewhat scientific” and 21% (M = 15.75) considered astrology to be “very scientific.” Holy science, Batman! If you would have asked me before the pseudoscience fair whether I considered our students to be knowledgeable of scientific practices, I would have undoubtedly given you a “Hell yes, we are very awesome!” I’m quite perplexed at the numbers we received. Why is it that everywhere I turn, I am shocked by the number of respondents who literally believe in the tenants of astrology? To address this issue, I’d like to examine some of the actual scientific studies.

Social psychologists have suggested a number of separate hypotheses that attempt to account for the prevalence of astrological beliefs. Does astrology inherently attract those individuals with intermediate levels of scientific knowledge? Is there a ‘metaphysical unrest’ within those individuals? Carlson (1985) has provided perhaps one of the most detailed tests of astrology using a double-blind study. Interestingly, Carlson sought out “professional astrologers” to design the tests in his study and to predict what would be deemed as successful test in advance – 28 astrologers from the NCGR took the bait. The first task consisted of 83 participants whose task was to correctly identify their own astrological chart from three choices. A correct chart was prepared prior to each task and was based on the current participant’s date of birth, time of birth, and birth place. Of the 83 participants, a mere 28 were able to accurately identify their own astrological chart. With only 3 choices, that’s exactly the success rate we would expect from random chance alone (27.667). Though, the professional astrologers had predicted more than half of the participants would be able to select their own chart. In the second task, 116 participants completed the California Psychological Inventory (an objective measure of psychological state in the same fashion as the MMPI) and provided their date of birth, time of birth, and birth place. This time, a professional astrologer was presented with the data from a single participant and 3 separate personality inventories (one of which matched the participant who provided natal data). The astrologers were tasked with discerning which personality inventory matched the data provided by the participant. Of the 116 cases, only 40 were able to accurately choose the correct CPI. Funny how this works out, but that’s nearly the rate of random chance yet again (38.667)! Yet, the astrologers predicted that they would be correct more than half of the time. Carlson remarked

It would appear as though the professional astrologers failed their own test… and the list goes on dear readers. In testing astrological signs and personality traits, no correlations were found (Illingworth & Syme, 1977; Tyson, 1977). Mayes and Klugh (1978) compared MMPI results to natal charts of 196 participants. Across 13 personality traits, astrological signs, and planetary aspects, no correlations were found. On June 7, 1989 the television show Exploring Psychic Powers… Live was aired in which James Randi set out to examine the claims of several individuals with “special power.” His offer was $100,000 to anyone who could demonstrate such power. An astrologer claimed that he would be able to tell the sign of person after talking with them for a few minutes. To prove that he was indeed supernatural, he would need to get 10 out of 12 correct. He was able to manage exactly none. James Randi currently offers $1 million for anyone able to perform this type of supernatural feat.

It’s quite disturbing to think that the nonsense of astrology has developed into a multimillion dollar industry with paid subscriptions, telephone services, and sketchy websites. In a seemingly cruel world, we strive to discern meaning that would give us an advantage, or at the very least, some glimmer of hope. There are those individuals who will make life-changing decisions regarding their finances, career changes, and health based on the pseudo-babble advice from astrologers. Scientific studies from two decades prior were unsuccessful in determining a link between astrology and personality, so why should it still be prevalent now? Let’s not blame the stars for our misgivings.

For the final word on this, I give you the ghost of Carl Sagan (be sure to watch until the end, I laughed so hard I spit my coffee out).