The Folly of Following Astrology

The Folly of Following Astrology  by Adam Braly

It never fails to make me feel incredulously small when I look up at the night sky. Like many before me, a naturalistic curiosity for all things astral often fills me with a sense of bewilderment and an unsullied yearning for veracity. Yet, as I tussle with my own empirical observations, there are those who would instead consult approaches inclined to conjecture. Perhaps the oldest construct to address the ultimate question of life, the universe and everything is that of astrology – the belief that the motion of the stars and planets are directly related to human events. Often credited with the invention of astrology, Babylonian priests were known to prophesize using the methods of astrology and by reading animal entrails. Their Greek neighbors to the northwest began to name the planets after their deities (names that are still in use today) and divine qualities were ascribed to the planets based on their previously wrought calamities of old. The  modern form of astrology was later crystallized by Claudius Ptolemy in his astrological bible, the Tetrabiblos. 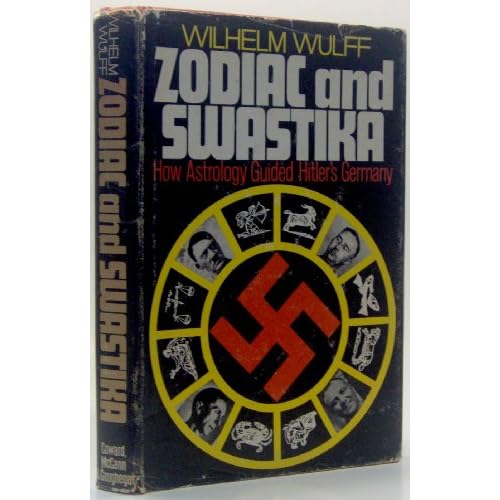 Although belief in astrology has waxed and waned, in the past 100 years we find ourselves inundated by a significant number of individuals across the planet with rigid belief systems that incorporate astrology as a means of knowing. Several sinister and high-ranking Nazi officials alike were proponents of astrology. Written by personal astrologer to Heinrich Himmler (known as the architect for the Nazi “final solution”), Zodiac and Swastika is author Wilhelm Wulff’s memoir of WWII in which he holds that the Nazi fixation with astrology was an instrument of manipulation and domination. Such a protracted form of literature denotes a need for absolution as Wulff recounts being a prisoner facing execution if he failed to predict the death of Hitler. All the same, Churchill’s British government was believed to have employed astrologers to assess and counteract the predictions of Nazi astrologers. On the home front, a 1988 issue of Time magazine singled out Ronald and Nancy Reagan as regular clients of astrology. The notion that the leader of the free world (for nearly a decade) actively engaged in astrological readings is beyond frightening. A blanket search for astrology in the Amazon marketplace yields a massive inventory of nearly 26,000 items (scientific literature notwithstanding). A 2009 Harris poll reports that 26% of U.S. citizens actively hold beliefs in astrology, and a 20-year survey of college undergraduates revealed that 78% of students considered astrology to be “very” or “sort of” scientific. Even now, a disturbingly high number of daily newspapers are rife with the pseudoscientific divinations of horoscopes, even if their inclusion was designed to increase circulation.

It is very easy for me to understand the origins of astrology in a world ignorant to the laws of nature with a view of the universe untainted by light pollution for centuries. Oh, what I would give to reclaim that magnificent perspective. Even in our continuing infantile existence as a species, we’ve managed to complete the standard model of physics despite oppositions to logic. The movement toward a critical-thinking populous is a just cause and what should be an effortless stepping-stone appears to be gaining traction once again. As a natural-born scientist and skeptic, I’d like to acknowledge the pseudoscientific mechanisms of astrology. Scientists seek consistent knowledge about the natural world through empirical observation and experimentation; I would require a colossal sum of evidence to be convinced of astrology. Astrologers and proponents of astrology cannot explain how astrology works and any proposed explanations are inconsistent with our scientific comprehension of the natural laws of the universe. For example, the basic notion that the gravitational forces of planets affect human life does not hold under mathematical scrutiny and for this claim to be verifiable we would be required to alter our current scientific understanding of physics, chemistry, and biology. The act of charting astrology relies heavily on the planets themselves, claiming to accurately match planetary positions to all aspects of human personality. But what about all the planets we’ve discovered since its inception? Early astrologers were unable to consider such possibilities, having only named planets up to and including Saturn and were ignorant to a whole host of galaxies and planets beyond even our own solar system. Much like all mythologies, modern interpretations heavily vary from their original design. Early astrological signs are not even the same as they were because the earth wobbles on its axis. 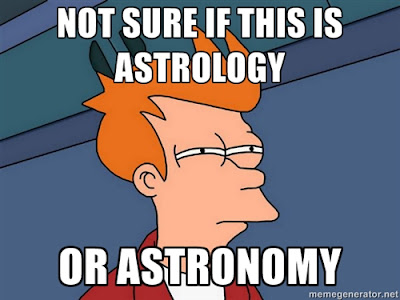 When I consider the modern hang-up with astrology there are several characteristics that may confuse it’s scientific veracity for many individuals. The language used by astrologers is fairly scientific and branches from the genuine scientific discipline of astronomy, and was considered necessary to understand modern science for hundreds of years. With unacceptable levels of science education, is it any wonder that the lay audience relieves heavily on scientific rhetoric as a means for veridical evidence? Scientific study relies heavily on experimentation by testing theories and considering alternatives and opens itself to inspection through peer review by other scientists. Not surprisingly, astrologers will often go to great lengths to avoid scrutiny and very rarely publish empirical articles in scientific journals.  Despite a large body of research showing that astrology cannot make reliable predictions, avid supporters of astrology claim to have seen it work in action. The tendency for individuals to personally identify with ambiguous statements or descriptions of personality has long been described as the Barnum effect. Almost all horoscopes are vague descriptions that can easily apply to most individuals and astrological predictions necessitate opportunities in the future rather than specific instances that are currently happening – in this regard, that are nearly immune to falsifiability. As a curious species we are programmed to find meaning in all that we see and experience, often when it is illusory. We desire to feel an increased autonomy in our lives to protect us from the dangers of living. Simply put, astrology aims to mislead our quest for scientific accuracy.

As Carl Sagan put it “There are two ways to view the stars. As they really are and as we might wish them to be.”