In any reasonable library or bookstore, an adult can walk in and find numerous books that allow him or her to learn about evolutionary theory to their heart’s content. Adults can even turn on their television or computer and find loads of documentaries on the subject if they don’t want to read about it. But where can children learn about evolution, especially as the teaching of it is still so (ridiculously) controversial?

Richard Dawkins and Dave McKean’s The Magic of Reality came out to great aplomb (and some criticism) a couple of years ago. I thought it was brilliant and beautiful, having been a fan of both Dawkins and McKean for years. It was, however, designed for ages 8 and up, and for younger kids was over their heads (although the iPad app that was released concurrently is still fun for the little ones).

For a little bit older kids, I recommend the always excellent Daniel Loxton’s Evolution: How We and All Living Things Came to Be. Loxton does an amazing job with Junior Skeptic, and his artistic and writing talents do not disappoint in this book. The Booklist review says:

This straightforward explanation and defense of the theory of evolution grew out of material published in 2007 in Junior Skeptic, the children’s section of a quarterly science education and advocacy magazine published in Canada. The author-illustrator, Junior Skeptic’s editor, describes evolution as the changes of life on earth over time as shown first through fossil finds and geological layers. Darwin’s theory of natural selection explained its workings, and now the process has been demonstrated in a variety of ways. Loxton also discusses convergent evolution, evolutionary compromises, and human ancestry, and he addresses some common concerns. His message is clear: “There is no intelligence—no brain—behind evolution that is running things.” Generously illustrated with photographs, cartoons, diagrams, and computer-generated images of ancient creatures, this is attractively designed. While great for kids around third grade and up, the material in this one is also a bit complex for the younger set. It does a really good job of addressing a number of common “arguments” against evolution, though.

That is why I was delighted to come across an ebook that is specifically designed to introduce evolutionary science to a younger crowd. Called Pepper’s Special Wings – A Story about Natural Selection, author Mary Ann Farah and illustrator Megan Stiver have done an excellent job introducing a complex topic to children in a very easily understandable and non-threatening way (even to children with religious parents).

Children have the right to know the truth about how life evolved on earth.

Children will also identify with Pepper’s social struggle, since self-esteem, self-image, bullying, and being teased are recurring childhood themes. Children will see that sometimes being different is what makes them amazing!

A special section for parents gives background information and suggestions for research to share with their children as they mature.

Only available as an e-book for now, this was the first children’s book published by the American Humanist Association’s publishing house. 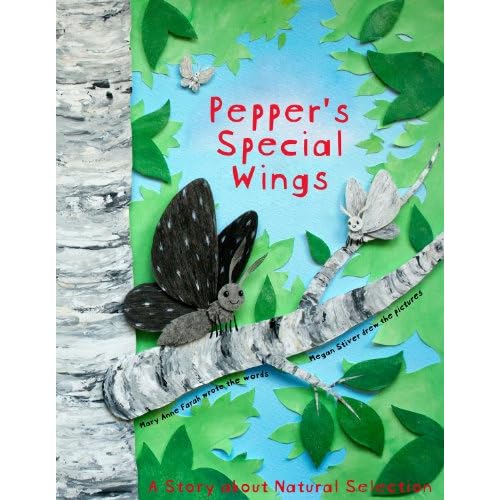 The book’s accompanying Facebook page is a great resource that is updated frequently with news and information on evolution as well. I heartily applaud both the AHA and the creators for such an outstanding contribution to the field and hope we get to see more projects in this vein soon!