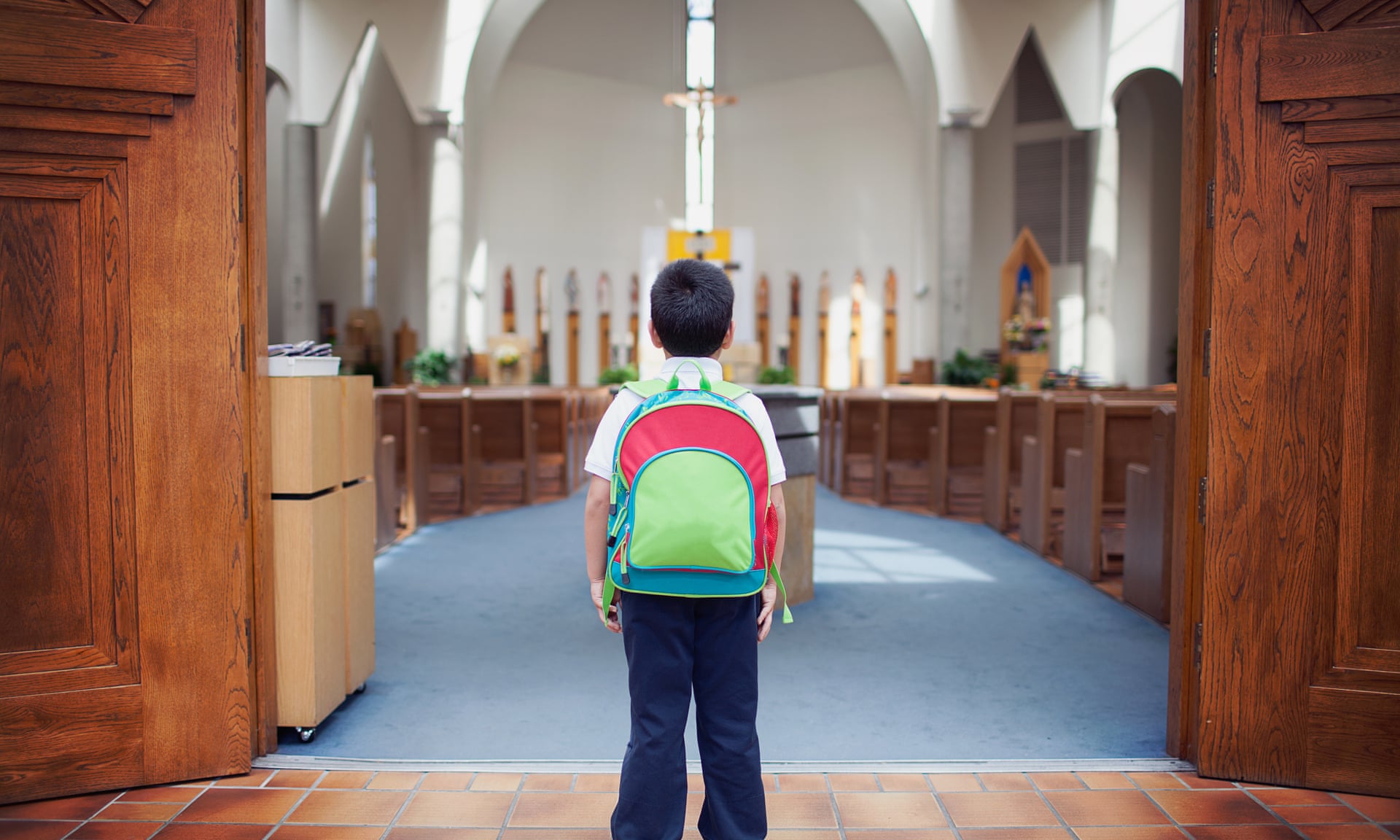 Here is an example of how religious identity works with a real life example. In the UK, presently, there is a move to decentralise the running of schools and introduce free market economics in to the school system in the form of what are called academies and free schools (somewhat similar to chartered schools in the US). One of the ideas is to reduce the money passed through to local education authorities and give the money directly to schools. This means that schools give up local authority support and become their own support networks. Large chains of academies run, more or less, like the local authorities they are replacing. Why am I mentioning this? Well, the geographically massive Catholic Diocese of Portsmouth, from Bournemouth to Portsmouth and up to Oxford, wants to make all of the Catholic schools (which are presently under education authority) into a single academy chain (MAT). The important part is what stuck out in their consultation document which stated:

Support funding given to the secular bodies (local authorities) would be transferred to each individual MAT which means it could be managed collectively. Thus, the local authority safety net would be replaced by a MAT. Control of the flow of funding will allow MATs more focus to their Catholic mission. The academy trust would be able to secure funding to enable support to be sourced from advisers, who are personally in tune with our Catholic life and mission…

So it is all about furthering the Catholic mission, using taxpayers’ monies to create more Catholics to sure up the identity of Catholicism through access to children.

In psychological terms, this is about defending and strengthening the in-group. Social identity theory is about the in-group and the out-group, such that actions are often seen in the light of supporting the in-group against threat from out-group members. It is why we are mistrusting or suspicious of people “not like us” and is the basis of intuitive desires to be racist, xenophobic, otherising to anyone outside of our identified group (football and sports, sexuality etc. etc.).

Blogowska and Saroglou (in this paper, too) showed that increased religiosity and fundamentalism led to prosociality biased more strongly towards proximal targets. In other words, the more (fundamentally) religious you are, in simple terms, the less universally moral you are likely to be. You will be nicer to people like you, but not so nice to the out-group. The less religious you are, the more universally moral you will be. In other words, again in simple terms, the more liberal, the more you have a wider in-group or the more likely you will be to be nicer to the out-group. Jesus had it right in his predictive parable of The Good Samaritan, because it turns out religious types need this lesson more than others. The out-group for religious types is less empathised with than vice versa.

This is also supported by psychological work by Jonathan Haidt and others who show that liberals are more concerned, morally, with fairness and harm, whilst conservatives are more concerned with ingroup, purity and authority. If we also link religiosity with conservatism (although this can be more complex than you might think), then we can see a pattern emerging that makes strong links to morality and the in-group.

Again, the research which came out over the last few days concludes that children from religious families are less altruistic and less empathetic than their no-religious counterparts. This fits very neatly with the above discussed ideas.

The summary to the paper reads:

Prosocial behaviors are ubiquitous across societies. They emerge early in ontogeny [1] and are shaped by interactions between genes and culture [2, 3]. Over the course of middle childhood, sharing approaches equality in distribution [4]. Since 5.8 billion humans, representing 84% of the worldwide population, identify as religious [5], religion is arguably one prevalent facet of culture that influences the development and expression of prosociality. While it is generally accepted that religion contours people’s moral judgments and prosocial behavior, the relation between religiosity and morality is a contentious one. Here, we assessed altruism and third-party evaluation of scenarios depicting interpersonal harm in 1,170 children aged between 5 and 12 years in six countries (Canada, China, Jordan, Turkey, USA, and South Africa), the religiousness of their household, and parent-reported child empathy and sensitivity to justice. Across all countries, parents in religious households reported that their children expressed more empathy and sensitivity for justice in everyday life than non-religious parents. However, religiousness was inversely predictive of children’s altruism and positively correlated with their punitive tendencies. Together these results reveal the similarity across countries in how religion negatively influences children’s altruism, challenging the view that religiosity facilitates prosocial behavior

As the Guardian reported of the research:

Children from religious families are less kind and more punitive than those from non-religious households, according to a new study.

Academics from seven universities across the world studied Christian, Muslim and non-religious children to test the relationship between religion and morality.

They found that religious belief is a negative influence on children’s altruism.

“Overall, our findings … contradict the commonsense and popular assumption that children from religious households are more altruistic and kind towards others,” said the authors of The Negative Association Between Religiousness and Children’s Altruism Across the World, published this week in Current Biology.

“More generally, they call into question whether religion is vital for moral development, supporting the idea that secularisation of moral discourse will not reduce human kindness – in fact, it will do just the opposite.”

Almost 1,200 children, aged between five and 12, in the US, Canada, China, Jordan, Turkey and South Africa participated in the study. Almost 24% were Christian, 43% Muslim, and 27.6% non-religious. The numbers of Jewish, Buddhist, Hindu, agnostic and other children were too small to be statistically valid.

They were asked to choose stickers and then told there were not enough to go round for all children in their school, to see if they would share. They were also shown film of children pushing and bumping one another to gauge their responses.

The findings “robustly demonstrate that children from households identifying as either of the two major world religions (Christianity and Islam) were less altruistic than children from non-religious households”.

Older children, usually those with a longer exposure to religion, “exhibit[ed] the greatest negative relations”.

The study also found that “religiosity affects children’s punitive tendencies”. Children from religious households “frequently appear to be more judgmental of others’ actions”, it said.

At the same time, the report said that religious parents were more likely than others to consider their children to be “more empathetic and more sensitive to the plight of others”.

The report pointed out that 5.8 billion humans, representing 84% of the worldwide population, identify as religious. “While it is generally accepted that religion contours people’s moral judgments and pro-social behaviour, the relation between religion and morality is a contentious one,” it said.

The report was “a welcome antidote to the presumption that religion is a prerequisite of morality”, said Keith Porteus Wood of the UK National Secular Society.

“It would be interesting to see further research in this area, but we hope this goes some way to undoing the idea that religious ethics are innately superior to the secular outlook. We suspect that people of all faiths and none share similar ethical principles in their day to day lives, albeit may express them differently depending on their worldview.”

According to the respected Pew Research Center, which examines attitudes toward and practices of faith, most people around the world think it is necessary to believe in God to be a moral person. In the US, 53% of adults think that faith in God is necessary to morality, a figure which rose to seven of 10 adults in the Middle East and three-quarters of adults in six African countries surveyed by Pew.