The Truth about God

Franz Kiekeben studied (University of South Florida) and taught (Ohio State University) philosophy, having written for the SKEPTIC magazine and published academic articles on determinism and time travel. He recently sent me a book he has written called The Truth About God to review. 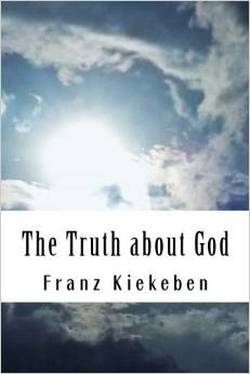 The book acts as a cumulative case against the existence of God which concludes by hoping to show that God is impossible, a stronger sort of claim than the usual probability claims we often see and use. Kiekeben romps through the usual arguments both for and against (the Christian) God, as we can see from the table of contents:

I must start out by saying that this book isn’t aimed at someone like me who has written books and pieces on these subjects, and who publicly speaks on them to various groups. No, this is aimed at the wobbly Christian in the middle, the person just getting into philosophy of religion, or the newfound atheist who needs some common ammunition to fight the fight.

So why buy this book? Well, for me, though I knew most everything in it, I enjoyed it, and it reminded me of so many things I wanted to write about. Indeed, it prompted three blog posts on the trot. In having the target audience as it does, Kiekeben makes a concerted effort not to trouble the reader with jargon. In fact, the extent of the philosophical jargon can probably be seen in the chapter titles of the morality sections seen above. This means it is a light and breezy read whilst still packing a philosophical punch. There is a lot in this book, covered concisely, and hinting at things which will pique the reader’s interest. Ideas of a perfect being and all the problems therein (which I have concentrated on in my recent ebook The Problem with “God”: Classical Theism under the Spotlight) are not covered in huge tome-inducing manners, but are almost conversationally talked about with ease of effort. This is a good thing and will serve the audience really well. Indeed, as mentioned, for me it acted as a great reminder for loads of topics. The fact that I read this in totality is testament to this since my reading list is so long, and I am currently in the middle of eight books, that if it wasn’t worth my while, I wouldn’t have bothered. But it was, and I enjoyed it.

In the same way, if you want a book to sail through the gamut of arguments against, and criticisms of the arguments for, God, then this serves those purposes well. It will lead the newcomer on to new and rich pastures whilst reminding the old timer of great arguments and forgotten battlefields.

It is a fairly simple matter to argue for the nonexistence of the biblical deity, or of the all-powerful, all-knowing, perfectly good being that most people believe in. But most atheists would say that where the general concept of God is concerned, nothing conclusive can be said. The great majority are willing to allow that God in this sense is at best highly improbable; they do not believe in him, but neither do they think his existence can be ruled out entirely. The central chapter in Dawkins’s The God Delusion is titled “Why there almost certainly is no God,” not why there definitely isn’t one, while the ads in the recent Atheist Bus Campaign in Britain merely stated that “there’s probably no God.” The view of just about every atheist, in other words, is that the existence of God is not, strictly speaking, impossible, and thus that no definitive demonstration of atheism is available.

I want to challenge this view. It seems to me that we can conclude with approximately the same level of certainty that no deity whatsoever exists… And the reason is that no such beings can exist, period. I admit this is a surprising claim. Even if it is possible to disprove the existence of certain gods, getting rid of all of them at once may appear to be completely out of the question. But in fact the argument I make is relatively short and simple, and can be understood even without any background in this topic. [p.5]

This is the crux of the book, then. The cumulative case leads towards the deductive conclusion that there is certainly no God.

So what is this argument from which Kiekeben can conclude this? Well, free will of course. Yes, my old favourite friend. As he states:

This argument against the existence of gods is likely to be doubly controversial. Not only does it claim that God cannot exist – a stronger claim than is usually made by atheists – it in addition bases this conclusion on a rejection of something else people find difficult to abandon, our supposed freedom. The difficulties for the concept of freedom on which the argument depends, however, have been pointed out by numerous philosophers, and I for one do not see any way around them. Philosophers who continue to maintain that there is such a thing as free will (in our sense of the term) have never been able to present a plausible or even clear account of the concept they have in mind. The conclusion, then, appears to be inescapable. If, as I maintain, a being must have the kind of metaphysical freedom described in order to qualify as a deity, and if such a freedom is impossible, then there cannot be any deities, period.. The truth about God is that he does not and cannot exist. Atheism isn’t merely true; it is necessarily true. [p. 231]

Now, there are some premises to properly validate here. And my criticism of Kiekeben is that he doesn’t necessarily do the robust spadework to do this. But that is not possible in the scope of this book as it would require an academic tome, perhaps, just to do that.

That said, the basic argument is there, and is, to me, incontrovertible: You want to believe in God, you’ve got to establish s sound version of free will. As I have mentioned elsewhere, this would be my tack in a debate on theism/atheism and I would start my stall out with William Lane Craig on exactly that point.

In sum, Kiekeben has taken on a big task here, and he both succeeds and doesn’t quite, because in some sense he can’t, with the nature of the book being a swift journey through the many arguments to move towards the one key argument: free will. Since the time and space and remit doesn’t allow him to go to town on the philosophy of free will and establishing that God must have it in order to exist in the way described by believers, then we must to some degree grant him his premises and thus his conclusion. I grant him them because he is right, but whether he conclusively shows that in the book is open to debate.

I would love for this to be the first of many books looking to do this. I attempted with my first book (Free Will? An investigation into whether we have free will or whether I was always going to write this book) to show that free will does not makes sense, and so therefore neither does God. Kiekeben has done it. Let’ see the conversation continue.

So, good and enjoyable book; quick and jargon free; covers many arguments for and against God; concludes that God cannot exist because libertarian free will does not exist.

Thanks to Franz for sending me a copy for review, and I would urge readers to give it a go.