My depressed sadness has turned into anger.

Labour borrowing was in 2007 (ie before the effects of the financial crisis) was 36 per cent of GDP, 6 per cent less than it was in 1997 after 18 years of Conservative government. In the year Labour left office, the UK’s debt was 79 per cent of GDP (including debt incurred through financial inventions, which is not standard as some will be recouped but which allows for easier comparison between countries). In the same year, Germany, the widely-praised economic power-house, had a national debt of 83 per cent of its total output, also including financial interventions [source: Eurostat, Oct 2012].

I don’t think it’s difficult to say “actually, it’s not true that Labour borrowed too much. Before the financial crisis hit, Labour was borrowing less than John Major was in 1997.” Angela Eagle recently demonstrated on BBC Question Time that it’s possible to get this message across simply and eloquently, saying that there wasn’t “a recession in 38 countries because [Labour] spent too much on schools and hospitals.” Nor is it difficult to convey the message that when the economy clearly needs a stimulus, the government should take advantage of exceptionally low global interest rates. [source for much of this]

I think there is a culture of misinformation and unfair press interference and power. Whilst the press is “free” in some sense, it is being run by people like Murdoch who can easily sway, if not directly, then by priming, the general population. People claim the power of the press is waning, but it is not. It is a consistent drip feed that is really hard to measure and quantify, which is why some research has drawn null conclusions. A sort of malaise about certain people and parties permeates as a result of such press. Miliband and Labour on economics is a perfect example. I walked past the paper stands locally here before, on and after election day. Because the Mirror and Guardian aren’t big around here (I live on the south coast of the UK, which is very Conservative), all you could see was a wall of slagging off the left. Without buying a paper you are being easily psychologically primed. We know enough about priming to easily conclude they have sway. I speak to a lot of people about politics, including family, and for the older ones much of their opinion is derived from the press. Where else would they get any information? Really? They don’t cruise the internet looking for different opinions and challenging their perceptions. They read their papers bought because it confirms their bias and then buy it. We all do this, for sure, and I am guilty too. But I am aware of my potential biases, including sources for this opinion article you are reading.

People vote based on intuitive psychological urges and post hoc rationalise it. I saw this first hand at school, where I was amazed at the lack of knowledge about the voting system, the parties and the manifestos, but mostly, about the ramifications for voting for each party. To think that most teachers and teaching assistants I spoke to in my school wanted to vote Conservative or UKIP is staggering considering these are the two parties which want to dismantle the education system, hold back salaries and wage increases etc. These same people consistently complain about curriculum changes, about all things driven by the Tories in education, and then go and vote for them primarily, it seems, based on things like immigration and a fundamental lack of knowledge on economic issues.

I am centre-left wing, with a mixed fiscal approach to economics, but big on social justice. I could easily have voted Green, Lib Dem or Labour, though it mattered not a jot because it is a totally safe Conservative seat and we operate on the hugely undemocratic and broken system of First Past The Post. My vote was essentially wasted. For those abroad who do not understand the UK voting syste and how it is not representative, see this:

The only place FPTP is still used is in ex-colonial countries as a hangover from the British Empire. It is that old-fashioned. The Scottish National Party, for example, garnered 1.5 million votes and returned 56 MPs. UKIP (urgh) garnered almost 4 million and returned… 1. Yes, one. So they have 3.9 million voters per MP whilst SNP have about 27,000 voters per MP. Fair? No. There is no representation for the smaller though still substantial parties. 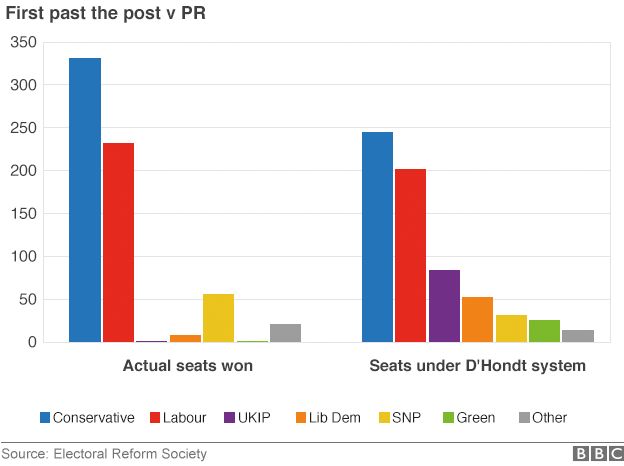 Anyway, the point of this is that I am sad and annoyed. We had a chance to forge a new direction of socially liberal fairness for Britain, and we got the opposite, the fault of which lies with a seemingly fairly ignorant electorate who potentially seek to confirm their irrational intuitions.

I have lots more to say but I don’t have enough wherewithal to say it right now.

Here is someone else’s piece which is well worth reading: An open letter to everyone who voted Conservative yesterday and why you should hesitate before you pat yourself on the back.