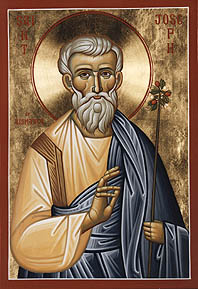 I have spoken about Joseph of Arimathea before, in the videos linked below. Just reading a chapter by Robert M. Price in The End of Christianity, I came across this very simple aspect which shows, to me at any rate, that Matthew’s sole job seemed to be to contrive as many random prophecy fulfilments from the Old Testament as humanly possible. As I set out in my book n the Nativity accounts, The Nativity: A Critical Examination, Matthew appears to be intent on providing as many contrived scenarios which result in Jesus’ existence being fully foreseen in the Jewish scriptures.

And so it is with Joseph of Arimathea. Leaving aside all of the other issues with the man, let us look at what is said of him (Matt 27):

When it was evening, there came a rich man from Arimathea, named Joseph, who himself had also become a disciple of Jesus.

Isaiah was a favourite of Matthew to find prophecies in. As Isaiah 53 states:

He was oppressed and He was afflicted,

Yet He did not open His mouth;

And like a sheep that is silent before its shearers,

So He did not open His mouth.

By oppression and judgment He was taken away;

And as for His generation, who considered

For the transgression of my people, to whom the stroke was due?

His grave was assigned with wicked men,

Yet He was with a rich man in His death,

Because He had done no violence,

Nor was there any deceit in His mouth.

This is a clear reference, in my mind, to the criminals with whom Jesus was condemned an crucified, and to Joseph. There is no reason why the Gospel author would mention Joseph as a rich man. It seems this is another example of the prophecy fulfilment. Another verse from Isaiah predicts Jesus’ side being pierced:

But He was pierced through for our transgressions

How about Psalms 22 ‘predicting’ the casting of lots for Jesus’ clothing! Every detail of Jesus’ death is painstakingly extracted from the Old Testament. Could it really have been contrived in such a way? Could God have really ensured such a replication of history without constraining people’s free will? Simply put, no. Psalm 22:

For dogs have surrounded me;

A band of evildoers has encompassed me;

They pierced my hands and my feet.

I can count all my bones.

They look, they stare at me;

They divide my garments among them,

And for my clothing they cast lots.

Casting lots for Jesus clothes when he has been scourged in such a way is a pointless exercise and is another example of the Gospel writers not thinking things through very well in a hurry to make the Jesus narrative appear to be a midrashic expose of the Old Testament.

Back to Joseph. Richard Carrier has documented potential contrivances in even his name. As Carrier said in a personal email to me some years back:

The ari- prefix meaning “best” appears in such words as aristocracy (rule of the best), aripikros (best in bitterness, hence “bitterest”), arideiketos (best in display, hence “glorious”), as explained in standard Greek lexicons (under “ari-“). As stated in the L&S Lexicon, “ari- : insep. prefix, like eri-, strengthening the notion conveyed by its compd.: cogn. with areiôn, aristos, chiefly denoting ‘goodness, excellence’.” This would have been well-known to anyone educated in Greek of the time, since ancient education emphasized classical and preclassical poetry, including the interpretation of rare words commonly used in such literature, where the L&S notes this prefix saw wide use. At least half a dozen examples are listed in the L&S.

The math- root forms the verb mathein (lexically referenced under “mathô”), to teach, and the nouns mathê, lesson or doctrine, and mathêtês, disciple (which can be confirmed in any lexicon).

And the -aia suffix as town or place appears for such regions as Galilaia (Land of the Galiyl) and Judaia (Land of the Jews), and such actual cities as Dikaia (Justice Town) and Drymaia (Thicket Town), the latter examples taken from the Barrington Atlas of the Greek and Roman World (the leading reference for ancient geography).

So a town could in principle be recognizably named mathaia, “teaching town” and hence (by association) “disciple town” (i.e. the town inhabited by people who receive the best teaching), or what we might encounter in English as “Teachton” or “Discipleton.”

I have only ever suggested this as a possible mytho-symbolic derivation of the name, not as something anyone has proven (much less myself). I think it probably intentionally evokes the Ramathem repeatedly called Armathaim in 1 Samuel, but it is very suspicious that this spelling isn’t preserved, but altered in exactly the way that creates the pun (analyzed above). But suspicion is not a proof.

Whilst it is not a QED claim, it is very persuasive.

Every claim surrounding the resurrection events seems highly contrived to the point of beggaring belief. I don’t buy it.