Being skeptical about Chinese ‘persecution’ of Christians

Some of you may have heard news reports like this one from Yahoo News about a church being ‘knocked down by the Communists’. This is how they report it: 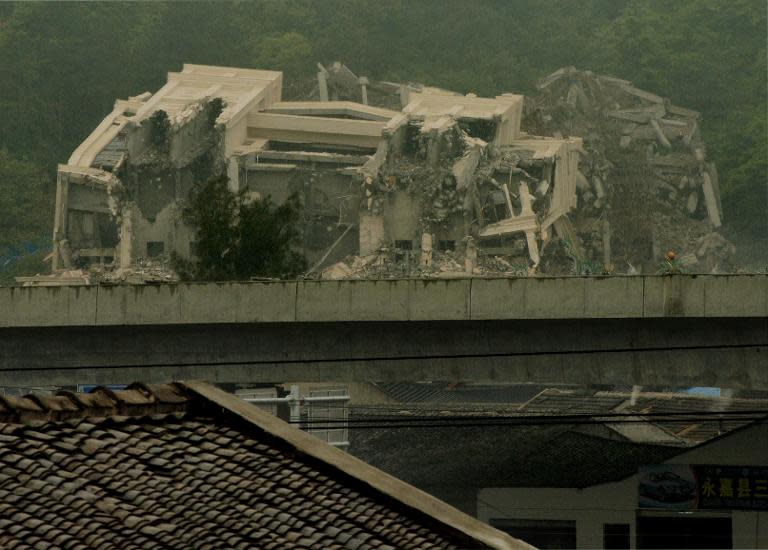 Wenzhou (China) (AFP) – The destruction of a towering church by Chinese authorities has sown fear in a thriving Christian community and highlighted tensions between a rapidly growing number of worshippers and the Communist state.

Massive slabs of concrete on a hillside were all that remained Wednesday of the Sanjiang Church after an army of excavators smashed into the building this week, following government claims it was an illegal structure.

The church stood above the village of Pudong, part of the city of Wenzhou.

The metropolis has a reputation for greater leniency towards religion and is known as China’s Jerusalem with more than a million Christians, as well as being a freewheeling centre of capitalism.

In Pudong, Christian households are openly marked out by posters with a red cross and a Bible verse from John: “In him was life and that was the light of men.”

The church was built in part with donations from the hundreds-strong congregation.

“We are crying inside, there is nothing more to say,” a middle-aged man who had been a member told AFP.

“It’s gone now,” added his wife. They declined to give their names for fear of reprisals by authorities.

The couple said some Christians living in the area have fled while others have been visited since the demolition by government “work teams” criticising them for their religious beliefs.

China’s ruling Communist Party keeps a tight grip on religion for fear it could challenge its grip on power, requiring followers to worship in places approved by the state and under government supervision.

But the Sanjiang church was registered with the authorities, unlike “underground” or “house” churches which seek to exist outside government control.

Activists believe the demolition was part of a wider crackdown on Protestant Christians, cloaked in a campaign against structures violating building codes in Zhejiang province.

The government has ordered at least five churches in Zhejiang — four of them in Wenzhou — to be demolished or to remove prominent crosses from their rooftops, state media has reported.

“I suspect it is a well-orchestrated campaign in order to contain the rapid growth of Christianity,” said Bob Fu, president of the China Aid Association, a US-based religious rights group.

“The deliberate wounds will take years to heal and the remaining little trust between the Chinese government and Chinese religious communities is gone,” he said.

Despite the constraints, the number of Christians has grown. The state-linked China Christian Council estimates the country has around 20 million Christians — not including Catholics — 70 percent of them living in rural areas.
But the true number of worshippers could be higher, at least 40 million to 60 million, according to some estimates.

“There has been a noticeable tightening in the religious atmosphere,” said Carsten Vala, an assistant professor at Loyola University Maryland and a specialist on Christianity in China.

At the same time a younger generation of church leaders has sought to push the boundaries, he added. “The registered churches are becoming more active and evangelical — that kind of exuberance.”

There have been previous cases of churches in China going under the wrecking ball, but largely in the 1980s and 1990s, Vala said.

The local government which administers the Sanjiang Church has remained silent on the issue, but has tried to counter the images of the church being destroyed with a dedicated microblog account.

“If the illegal structure was not demolished, the government’s credibility would decline and social justice would not be fulfilled,” a typical post said.

A report in state-run media after the demolition said the complex was approved on an area of 1,881 square metres (20,240 square feet) but its actual size was more than 11,000 square metres, including the main building, annexes and a car park.

But its destruction may push Christians underground.

Around 300 metres down the hill from the ruins of the church, a middle-aged woman — converted to Christianity by her 73-year-old mother who embraced religion after illness — said they would now seek other places to pray.

It’s easy to read stuff like this and just take it for granted. I did. I actually thought, without skeptically questioning it, that these Christians were being persecuted; that the authorities were looking for crappy reasons to do what they ideologically wanted. And they still  might be, don’t get me wrong. But there is more than a little suspicion of propagandist reporting with a potential agenda. Here are a few comments I garnered in just 5 minutes from reading the article:

What a bunch of BS. China has all sorts of religions and temples and so forth. This structure was built illegally and they probably knew they were building it illegally up front. I live in China and I know Muslims, Buddhists, Taoists, Christians, Jews, Atheists and more. There is a beautiful new Buddhist temple being completed as I speak in Zhongshan and there are churches as well.
I tire of the false reporting and misleading news by western media depicting China in ways that aren’t valid. You can be a Christian in China people, just follow the building code and play by their rules. China has other things to worry about and focus on like the air and the water.

I’ve read numerous reports on this, all slanted towards Christian persecution. Yet nearly all the reports mention the supposed violation of building codes / building safety / building beyond the size allowed for on the permit with absolutely no refutation by the church that this is not the case. There’s the insinuation that the code violations are being invented to give them the reason to knock the church down, but anyone can insinuate anything. I’d have thought that if the Chinese government wanted to persecute Christians they’d do so without even wanting to invent an excuse.

Claims of Christian persecution fit nicely into their narrative, with those godless communists as the baddies. I don’t know what the motivations are on either side here, and no reliable method of finding out. I know that Christians manufacturing a persecution incident by deliberately over-building their church fits into my narrative on how I see them behave with their cry-wolf stories of false persecution and their history of using martyrdom for their religious proselytization.

So they should be able to break the law with impunity and build whatever size church they like, just because they’re Christians?

If this was any other kind of building, this would not be a story. “China demolishes shopping centre for violating planning permission rules” is not a headline, but change it to “church” and suddenly it’s an attack on religion?

The dumbest thing is, by breaking the rules, all this church has done is confirm Beijing’s suspicions and made it that much harder for the Church to get any kind of planning permission in the future.

‘Granted permission to build a space for worship on about half an acre, the congregation instead built a two-acre church and annex’

Not really a story then is it. They stole land and thought themselves above the law

I can’t understand why God did not step in and protect the church unless…Unless…. Oh no say it isn’t so!

So while I wouldn’t cast dogmatic opinions about what is going on, I certainly would urge caution before throwing around the persecution claims. At the end of the day, the rules are, as they are in this country, you build something which has not been granted permission, it gets taken down.