Christianity is not responsible for science (part 2)

The other day I posted a piece refuting the notion that Christianity is somehow causally responsible for the development of science and the scientific method. I would like to continue with a short piece looking at another couple of points which I have had heard raised. 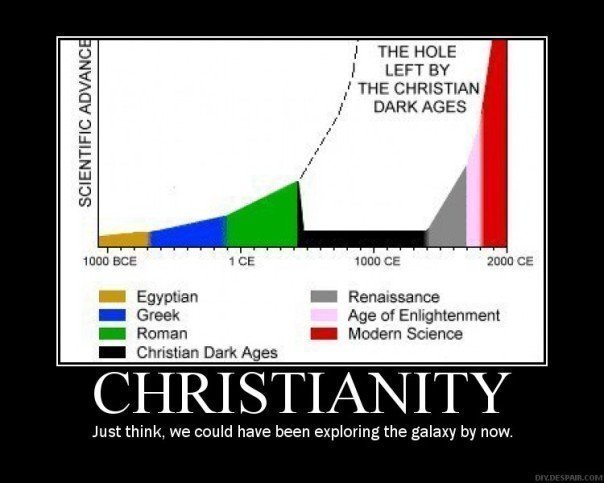 Epistemologically speaking, truth was often seen as being the product of revelation, whether from God or the Pope. Therefore, empiricism was frowned upon as a method to arrive at truth and certainly could not trump revelation.

What was also frowned upon was scientific progress. This value was seen as poor in comparison to the value of the Gospels and spreading the good word, and the resulting relationship with God. These value positions did not promote science or empiricism. For example, curiosity was not seen as a moral good. Until all of this changed, prior to the Scientific Revolution, things could not change. The compass, the telescope, the printing press all helped to change this curiosity and interest in science.

As Richard Carrier has said, the pagans were much closer to the Scientific Revolution, they just hadn’t got there yet (by the time their religions were superseded). He elucidates here:

But again I am not saying all Christianity does this now. Rather, I am saying Christianity will always generate factions that do, as it always has. And the last thing we want is to allow one such faction back in power, as had been the case during Christianity’s first thousand years in the saddle. We must not go back to the Dark Ages.

Another claim that I have had levelled at me is that the Merton Thesis (put forward by sociologist Robert K. Merton) shows that the Puritan and Protestant ethos at the time was the necessary causal factor in the development of the Scientific Revolution. I will refer to wiki here, to give you an idea of what the thesis is, and then allow wiki to show general criticisms of it:

The Merton Thesis is an argument about the nature of early experimental science proposed by Robert K. Merton. Similar to Max Weber’s famous claim on the link between Protestant ethic and the capitalist economy, Merton argued for a similar positive correlation between the rise of Protestant pietism and early experimental science.[1] The Merton Thesis has resulted in continuous debates.[2]

Although scholars are still debating it, Merton’s 1936 doctoral dissertation (and two years later his first monograph by the same title) Science, Technology and Society in 17th-Century England raised important issues on the connections between religion and the rise of modern science, became a significant work in the realm of the sociology of science and continues to be cited in new scholarship.[3] Merton further developed this thesis in other publications.

The Merton Thesis has two separate parts: firstly, it presents a theory that science changes due to an accumulation of observations and improvement in experimental technique and methodology; secondly, it puts forward the argument that the popularity of science in England in 17th century, and the religiousdemography of the Royal Society (English scientists of that time were predominantly Protestants or Puritans) can be explained by a correlation between Protestantism and the scientific values.[4] He focuses on English Puritanism and German Pietism as responsible for the development of the scientific revolution of the 17th and 18th centuries. Merton explains that the connection between religious affiliation and interest in science is a result of a significant synergy between theascetic Protestant values and those of modern science.[5] Protestant values encouraged scientific research by allowing science to identify the God influence on world and thus providing religious justifications for scientific research.[1]

The first part of his thesis has been criticized for insufficient consideration of the roles of mathematics and the mechanical philosophy in the scientific revolution. The second part has been criticized for the difficulty involved in defining who counts as a Protestant of the “right type” without making arbitrary distinctions. It is also criticized for failing to explain why non-Protestants do science (consider the Catholics Copernicus, da Vinci, Descartes, Galileo, or Huygens) and conversely why Protestants of the “right type” are not all interested in science.[4][6][7]

Merton, acknowledging the criticism, replied that the Puritan ethos was not necessary, although it did facilitate development of science.[8] He also notes that institutional legitimacy was acquired, science no longer needed the religion, eventually becoming a counterforce, leading to religious decline. Nonetheless, early on, religion is a major factor that allowed the scientific revolution to occur.[1] While the Merton thesis doesn’t explain all the causes of the scientific revolution, it does illuminate possible reasons why England was one of its driving motors and the structure of English scientific community.[9]

That pretty much says it all: correlation; arbitrariness; special pleading over what represents Christianity etc etc.

Then there is the whole idea that the Scientific Revolution is a misnomer (taken from the wiki page on the scientific revolution):

Another contrary view has been recently proposed by Arun Bala in his dialogical history of the birth of modern science. Bala argues that the changes involved in the Scientific Revolution—the mathematical realist turn, the mechanical philosophy, the atomism, the central role assigned to the Sun in Copernican heliocentrism—have to be seen as rooted in multicultural influences on Europe.Islamic science gave the first exemplar of a mathematical realist theory with Alhazen’s Book of Optics in which physical light rays traveled along mathematical straight lines. The swift transfer of Chinese mechanical technologies in the medieval era shifted European sensibilities to perceive the world in the image of a machine. The Hindu-Arabic numeral system, which developed in close association with atomism in India, carried implicitly a new mode of mathematical atomic thinking. And the heliocentric theory, which assigned central status to the Sun, as well as Newton’s concept offorce acting at a distance, were rooted in ancient Egyptian religious ideas associated with Hermeticism. Bala argues that by ignoring such multicultural impacts we have been led to a Eurocentricconception of the scientific revolution.[76]

A third approach takes the term “renaissance” literally. A closer study of Greek Philosophy and Greek Mathematics demonstrates that nearly all of the so-called revolutionary results of the so-called scientific revolution were in actuality restatements of ideas that were in many cases older than those of Aristotle and in nearly all cases at least as old as Archimedes. Aristotle even explicitly argues against some of the ideas that were demonstrated during the scientific revolution, such as heliocentrism. The basic ideas of the scientific method were well known to Archimedes and his contemporaries, as demonstrated in the well known discovery of buoyancy. Atomism was first thought of by Leucippus and Democritus. This view of the scientific revolution reduces it to a period of relearning classical ideas that is very much an extension of the renaissance, specifically relearning ideas that originated with somebody other than Aristotle and particularly those rooted in the schools of Plato and Pythagoras. This view of the scientific revolution does not deny that a change occurred but argues that it was a reassertion of previous knowledge (a renaissance) and not the creation of new knowledge. It cites statements from Newton, Copernicus and others in favour of the Pythagorean worldview as evidence.[77]

We can see, then, that if these claims hold water, then most of the scientific groundwork predates Christianity anyway, rendering the claim that it was causally necessary for its development rather impotent…

So, all in all, Christianity was obviously part of the development of science since it had to be by default. But it was not BECAUSE of Christianity that science developed. Perhaps even in spite of it! No, it was because people are as people are: inquisitive, seeking power and knowledge, intelligent.