Randal Rauser has a pop at me

A few weeks back, theologian, author and blogger Randal Rauser had a pop at me. We have previously had a few cross-posts and whatnot, and even debated on US radio/Reasonable Doubts podcast on the subject of the Nativity, which can be found here. Luke, a theist who regularly comments here,, also comments at Rauser’s blog, and I got into a revived debate about libertarian free will and the Kalam. Below is Randal’s post, in green, and I will comment interlinearly in grey. 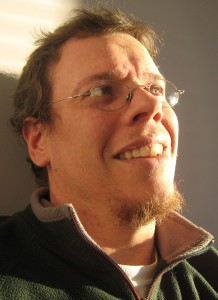 Time and again I have encountered the inexplicably dull lack of awareness that so-called “skeptical free thinkers” have about their own double standards. As a case in point consider this comment posted just today in the thread to my article “The kalam cosmological argument and libertarian free will“. The comment comes from blogger Jonathan MS Pearce and it is meant to provide a rebuttal to the philosophical appeal to agent causation:

As Dennett has just said:

“Some have gone so far as to posit an otherwise unknown (and almost entirely unanalyzable) phenomenon called agent causation, in which free choices are caused somehow by an agent, but not by any event in the agent’s history. One exponent of this position, Roderick Chisholm, candidly acknowledged that on this view every free choice is “a little miracle”—which makes it clear enough why this is a school of thought endorsed primarily by deeply religious philosophers and shunned by almost everyone else.”

That says it all for me!

I will begin by saying some words about the quote itself. Next, I’ll make some observations about Jonathan’s use of the quote.

It is important that we have this picture in perspective. Dennett is an important philosopher. But he is also militantly anti-religious and obsessively reductionist in philosophical orientation. Philosophy is a continuum running from austere reductionism (e.g. all that exists are atoms and the void) to a rich anti-reductionism (e.g. the world consists of minds and bodies, irreducible moral and aesthetic facts, socially constructed objects, etc.). Dennett simply denies as non-philosophical any positions that offer a richer anti-reductionism than he is willing to stomach.

This appears akin to me slamming Randal for using a Christian philosopher in defence of his position. “Philosophy is a continuum running from austere atheism (e.g. all that exists are atoms and the void) to a rich anti-atheism (e.g. the world consists of minds and bodies, irreducible moral and aesthetic facts, socially constructed objects, etc.). Swinburne/Craig/Plantinga simply denies as non-philosophical any positions that offer a richer anti-atheism than he is willing to stomach.” Where everything there is equally as assertive and undefended.

But it isn’t enough to dismiss anti-reductionism as non-philosophical, and so Dennett goes for the ultimate label of indignation for any secular ideologue: religion. Thus, he summarily equates anti-reductionism with “deep religion”, to which the proper response is apparently “shunning”. (For further discussion see my article “Substance dualism as atheistic heresy.”)

Isn’t that revealing? Dennett undoubtedly thinks of himself as some sort of free thinker. But they way he deals with anti-reductionism in philosophy is by labelling and shunning like some old-school Anabaptist patriarch who directs the community to turn their collective back on a prodigal son.

So a freethinker cannot, by definition, hold a position? We need to define freethinker here. In fact, Randal is making wholesale claims on the term without defining it at all. It seems he thinks a freethinker should have such an open mind that all sorts of shit can get in.

Before we turn to Jonathan’s response, I’d like to make a few extra points. First, Roderick Chisholm, one of the twentieth century’s leading analytic metaphysicians, wasn’t particularly religious. But he was persuaded of the truth of substance dualism and agent causation on philosophical grounds.

I would be interested as to how he knows this. I would wager Chisholm didn’t use evidence and argument to drive this position, but desire for it to be true in order to derive such complex, rather iconoclastic thought. In fact, his thoughts on this topic were “constantly evolving” and it appears that the (as with most libertarians free willers) main reason for following this line is to satisfy ideas of moral responsibility. I have actually accused Dennett of this with his compatibilism in my Free Will? book. Moral philosophy dictates how people approach philosophy of free will. I would wager, though cannot know, that Chisholm would be persuaded on such grounds, rather than the grounds of agent causation in and of themselves, not least because those grounds are actually thoroughly shaky.

Second, Dennett’s notoriously austere and ideologically driven reductionism has earned him the criticism of many atheistic philosophers (of which the most famous is probably John Searle).

This leads into the third point: philosophy is full of atheistic anti-reductionists from Searle to Colin McGinn to Thomas Nagel to Noam Chomsky.

And finally, let me note an important point about Dennett’s “little miracle” quip. This is an empty bit of rhetoric from an ideologue, but it conceals an important fact that every philosopher from the most ideologically driven reductionist like Dennett to the richest anti-reductionist (e.g. Henri Bergson) has miracles in his philosophy. Consider, for example, the philosophy of mind. Colin McGinn’s “little miracle” may be found in his acceptance that the “soggy grey matter” of the brain somehow produces the “Technicolor phenomenology” of conscious experience. But Dennett’s “little miracle” is found in his denial that there is any such thing as the Technicolor phenomenology of conscious experience (it is that little miracle in particular which earned Dennett the derision of John Searle).

There seems to be some properly dubious equivocation on the term “miracle” here,

To sum up, we all grapple with the mystery of existence and the attempt to find the optimal scaling of reductive theory to irreducible phenomena.

It’s funny, I teach persuasive writing (in fact, I am doing so at the moment. Well, not right now.) and this seems to be a great case of stating opinion as fact. Asserting there are irreducible phenomena in seemingly absolute terms. Lightning used to be thought as the wrath of the gods and I suppose people thought that that could not be adequately reduced to component ;parts and physics. Randal is rather dogmatic for one slagging off freethinkers…

Dennett’s anti-free thought ideology which drives him to label and shuns those with whom he disagrees is the bane of open and free critical enquiry.

Finally, let’s turn to Jonathan who simply quotes Dennett’s anti-free thought, ideological reductionism and then blithely quips “That says it all for me!”

Let’s try to get our minds around that. Imagine a Christian philosopher who is the equivalent in the Christian community that Dennett is for atheists like Jonathan. Let’s call our ideologically driven anti-reductionist “Professor Brown”. Now imagine if a Christian had written this to Jonathan:

As Brown has just said:

“Some have gone so far as to deny the undeniable experience and immediate evidence of agent causation by denying there is any agent who causes anything (in which case who is causing the keys to depress on my keyboard?). One exponent of this position, Daniel Dennett, candidly denies that any minds acting in the world exist—which makes it clear enough why this is a school of thought endorsed primarily by deeply anti-religious philosophers and shunned by almost everyone else.”

That says it all for me!

I’m quite sure that Jonathan would be falling all over himself upon reading this mindless quotation of Professor Brown. And he should be. You can’t just label those who pursue a more rigorously reductionistic philosophy and submit them to shunning. You’ve got to consider their proposals on their independent merits.

What is sad is that so-called free thinkers like Jonathan seem blissfully unaware that the courtesy extends in the other direction as well. And as they follow lockstep behind the comments of their ideological leaders — “That says it all for me!” — they become enemies of the very free thought they proclaim with their words.

Hmm. A lot of bluster over very little. This comment on Randal’s original blog post says it all:

That certainly is a long post, for so little actually addressing the post title. As far as I can tell, the entire case is that Dennet is an “enemy” of free thought because he finds a particular school of thought to be primarily religious, and reports that it is generally shunned. Jonathan MS Pearce is an “enemy” of free speech because, when he finds someone articulating his point of view, instead of putting it in his own words, he quotes the statement and states that he agrees.

And, as usual, Rauser is dishonest: he accuses Dennet of “shunning” anyone who doesn’t agree with him, based on Dennet reporting that other people shun a particular school of thought (not the people who follow it).

Basically, at the end of a long and protracted back and forth over a long period, throwing in a supporting quote from a famous philosopher is pretty normal. It’s totally undeserving of such a rant and it certainly wasn’t my idea of a rebuttal, since I had expressed my refutation in a whole number of posts. This was just that, a supporting quote.