The Ark before Noah 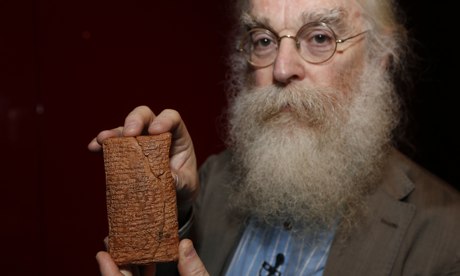 There has been a number of articles on this due, perhaps, to a Channel 4 Documentary on this due to be shown in August (that’s a long way off!). It seems that instructions for the Ark in the Bible were lifted from an earlier source (which is no surprise since the flood account is lifted from the Gilgamesh or both from an earlier ancestor). The follow up article to this can be found here.

British Museum expert says 3,700-year-old instructions describe how to build round boat – but he does not believe ark existed

Noah’s ark was never built, still less crash landed on Mount Ararat, a British Museum expert has declared – despite holding in his hand 3,700-year-old instructions on exactly how to construct one.

“I am 107% convinced the ark never existed,” Irving Finkel said. His discoveries, since a member of the public brought a battered clay tablet with 60 lines of neat cuneiform text to Finkel – one of the few people in the world who could read them – are outlined in a new book, The Ark Before Noah.

While every child’s toy and biblical illustration – and the latest film version, due for release later this month and starring Russell Crowe as Noah – shows a big pointy-ended wooden boat, the Babylonian tablet gives what Finkel is convinced is the original version of the story.

The ark is a huge circular coracle, 3,600 square metres in dimension or two-thirds the size of a football pitch, made like a giant rope basket strengthened with wooden ribs, and waterproofed with bitumen inside and out. This was a giant version of a craft which the Babylonians knew very well, Finkel pointed out, in daily use up to the late 20th century to transport people and animals across rivers.

Its people-and-animal-carrying abilities will soon be put to the test: the production company Blink is making a Channel 4 documentary based on his research, including building a circular ark.

The tablet gives a version of the ark story far older than the biblical accounts, and Finkel believes the explanation of how “holy writ appears on this piece of Weetabix”, is that the writers of the Bible drew on ancient accounts encountered by Hebrew scholars during the Babylonian exile.

Texts about a great flood and the order by God to the one just man to build a boat and save himself, his family, and all the animals, clearly older than the Bible story, were first found in the Middle East in the 19th century. They caused both consternation and wild excitement, including an expedition to find the broken part of one tablet in a mountain of shattered clay fragments.

However, the tablet studied by Finkel is unique, the only one with precise instructions on how to build the ark – and the crucial detail that it should be circular. He believes the data on its exact dimensions, the two kinds of bitumen, and the precise amount of rope needed, are evidence not that the vessel once existed, but of a storyteller adding convincing details for an audience that knew all about boat-building.

The tablet was brought to him on a museum open day by Douglas Simmons, whose father, Leonard, brought it back to England in a tea-chest full of curios, after wartime service in the Middle East with the RAF.

When the Guardian originally broke the story of its discovery, Simmons said his father had once showed his treasures to some academics, and was bitterly disappointed when they were dismissed as rubbish. He suspects the tablet was either bought for pennies in a bazaar or literally picked up.

Finkel describes the clay tablet as “one of the most important human documents ever discovered”, and his conclusions will send ripples into the world of creationism and among ark hunters, where many believe in the literal truth of the Bible account, and innumerable expeditions have been mounted to try to find the remains of the ark.

The clay tablet is going on display at the British Museum, loaned by Simmons, beside a tablet from the museum’s collection with the earliest map of the world, as seen from ancient Babylon. The flood tablet helped explain details of the map, which shows islands beyond the river marking the edge of the known world, with the text on the back explaining that on one are the remains of the ark.

Finkel said that not only did the ark never exist, but ark hunters were looking in the wrong place – the map shows the ark in the direction of, but far beyond the mountain range later known as Ararat.

• The Ark Before Noah: Decoding the Story of the Flood, by Irving Finkel, Hodder & Stoughton