Well, without having yet finished, it seems open and closed. Don’t get me wrong, both were assured and neither will shift the other’s position, obviously. But you simply can’t argue against such robust and predictive science.

On the NBC News discussion board, I quite like this:

Ok, just to clarify. Creationism by and large does not support the theory that the earth is 6,000 years old. There are things such as literal interpretations and then there are figurative interpretations. Make no mistake however man did not evolve from ape. How proposterous. Show me any evidence..any?  There is none. I love science. I love how we can figure some things out with science. However, there is none truth. Science has not and cannot decisevly determine when the earth was created or when the stars and universes were created. They cannot scientifically proce how man evolved or where life came from. These are the beauties of God. I have no proof God created anything…none. However, science has no real evidence. Therefore, I choose to believe that God, who is omnipotent and slightly more intelligent than every scientist added up is the Creator of the heavens and the earth and life and man. No side has proof. Sciences theories ironically take a modicum of faith to believe. The very fabric they try to destroy God with. Christians have faith in God and His word. Until He is proven worng I prefer to err on the side of eternal salvation.

To which someone replied:

1. We not only evolved from apes, we are still apes. Hominoidea — look it up.

2. Science cannot decisively determine anything. That’s not how science works. Science works by formulating theories based on observation (evidence). A good theory is very well supported, but always (in theory, heh) falsifiable. That is science’s greatest strength– that it is always open to new evidence which overturns previous conclusions. A strength which religion, notably, lacks. Because it’s not based on evidence in the first place.

3. In order to prove God wrong, you’d have to do a couple of other things first. Like, prove that he exists, and then prove that he actually said anything in order to be wrong about it. All we have are the words of men– lots of men, long-dead men, and generally anonymous men– claiming to know what God thinks. Do not confuse the two. Literally anybody can say anything they want about what God thinks, but it’s still just some human speaking for God.

You say you love science, but you don’t appear to know much about how science works. That’s a shame, because science works wonderfully for its purpose, and its purpose is understanding the universe. In that regard, religion is obviously inferior. I would suggest using religion for other things and letting science figure out the world for you.

The debate can be seen here:

So what do you guys think? Who won? What does that question even mean in this context?

Ham spent a lot of time showing Creationists do science. Yes. That does not mean that Creationism IS science. If you want to see a complete destruction of the case for the ark, check this podcast out. 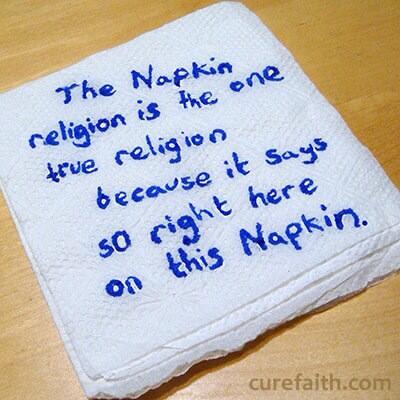