As I wrote over at John Loftus’ excellent Debunking Christianity site (check it out for Vincent Torley’s comments!):

Thanks to John for allowing me to post this. So, the celebrations are upon us to commemorate good ole Jesus and his rather miraculous (and dare I say imaginary) birth. Well, he may have been born, but not like that. But enough of that. Or maybe not. I have two rather decent suggestions with which to fill your stockings (Christmas, not underwear).

Although I started off as an author, recently things have been developing as a publisher of primarily skeptical books through my Onus Books imprint. Over the last month or so two of my authors have released books which I would love to share with the good people of DC. First up is Aaron Adair’s very topical The Star of Bethlehem: A Skeptical View

(with a foreword by astronomer Bob Berman) which debunks naturalistic and supernaturalistic explanations of that most tenacious of astronomical signs, never far from Christmas conversations. The books serves to undermine historical veracity of the Nativity narratives, and sits alongside my own book, The Nativity: A Critical Examination.

Second is a book which seeks to undermine the notion of a real and existent God through the illustration that infinity, as a concept, can be nothing more than abstract. Dot, Dot, Dot: Infinity Plus God Equals Folly

(with a foreword by Victor J. Stenger, no less) shows that if God is infinite, under any coherent understanding of the word, then he too should be seen as merely abstract. The book seeks to puncture the tires of mathematical Platonism. Here is a little bit about each book from the authors themselves. Please support sceptical publishing by bagging yourselves a copy of either, or both! Available as paperbacks and ebooks on the internet and from bookstores.

The Star of Bethlehem: A Skeptical View

Every holiday season, we hear the loading of the cannons in the War on Christmas. But long before FOX News went in search of conflict, there have been many that have created peace between two subjects that many think are antithetical to each other: science and religion. And in that holiday spirit, the tools of astronomy have been applied to show something amazingly true about Christianity and the birth of Jesus. 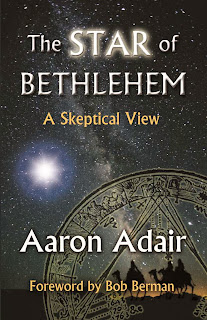 Or so it seems, as every year planetaria around the world present some theory or another about what might have been the Star of Bethlehem, the guiding star from the Gospel of Matthew that told eastern sages of the birth of the Jewish King. These shows have existed for as long as there have been planetarium shows, starting back in the 1930s, and there have been astronomical and astrological speculations going for about for centuries, many pointing to its beginnings with the great Johannes Kepler, who discovered the three laws of planetary motion. Add to this hundreds of books, articles, TV and radio shows, all dedicated to discovering what it was in the skies that would have been seen as the star that signaled the birth of Jesus.

But with so much speculation over so many years, the number of hypotheses is bewildering. Comets, meteors, exploding stars, the discovery of Uranus, planetary conjunctions, the zodiacal lights, and aliens all have their own advocates among astronomers and the faithful. But just how well do these theories stand up to scrutiny? Can any of them really explain why Magi (“Wise Men”) would travel from Persia to Judea 2000 years ago, and do any of these astronomical objects actually fit the description of the events from the Bible?

In The Star of Bethlehem: A Skeptical View, author Aaron Adair, Ph.D., looks into the proposals and shows why they all fail to conform to the story of what is really supposed to be a miraculous star. Along the way, he discusses many aspects of the history of the ancient world, of science, and of the pseudoscience of astrology. Along with a critical eye on scientific theories or the Star, he also shows that the story of the Star of Bethlehem and the Magi is almost certainly a deliberate fiction by the author of the Gospel of Matthew.

The Star of Bethlehem has been called by Richard Carrier “the definitive takedown” and “the go-to resource” on the Star, Thomas Verenna says it is “a must-read, and perhaps definitive, book on the subject”, and David Fitzgerald calls it “[a] fascinating and readable feat of hardcore historical legwork and keen scientific analysis.” So if you are interested in science, its history, and the intersection of science and religion, not to mention the takedown of years of apologetic efforts to save the Nativity story, you will enjoy The Star of Bethlehem: A Skeptical View.

You can also learn more about the book on its Facebook page, where news, reviews, and updates are posted.

About Dot, Dot, Dot in my words: The book is pretty short, as I had always intended it to be, and as you’ll see from some of the commentary it’s already received, I aimed to keep it interesting, generally accessible, and readable despite being about mathematical topics. I also tried to avoid using equations essentially entirely. 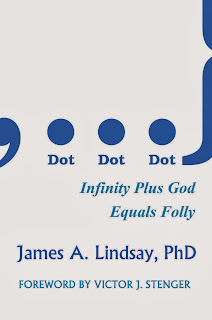 The title refers to the ellipsis, the three dots that we use to denote the elements of many infinite collections, for example {1, 2, 3, …}. The reasoning behind that choice is that really all of what makes up infinity is hidden within those three dots. Of course, we also use “…” as a written response when trying to indicate incredulous silence, which is what many arguments regarding God, especially when involving the infinite, deserve.

The primary themes of the book aim to reveal that “existence” in the abstract sense doesn’t mean the same kind of thing that it means in the real sense, which is to say it makes an attempt to undermine mathematical and philosophical Platonic realism. Indeed, I make the analogy of a “map” (abstractions, mental objects) and the “terrain” it attempts to describe (reality) and repeatedly thrust the idea that we must be careful not to confuse the two. Infinity and God, so far as we can tell, both are abstract, mental stuff used to attempt to understand reality, and the line should be drawn there. This implies, of course, that God, as the being so widely believed-in, simply doesn’t exist. All there is in its place is an idea, or really a philosophical ideal.

I also sought to clear up how easily infinity can end up being misused, particularly in philosophical arguments and even more especially in theological ones. It’s not just a penchant of theologians to invoke infinity when talking about God, though. As I show, it’s an inextricable part of theology and an element of official religious dogmas. Of course, this leads apologists to have to scramble to defend their use of the concept of the infinite, and upon that–their own petard–I hope to hoist them.

As for why I wrote it, I don’t know this, but I suspect we’re going to be hearing more mathematics from pastors in the coming years. Too many people with too many voices know too much science for them to keep railing on it. Indeed, it chases many young people away to go anti-science for Jesus. Mathematics, though, is a subject that most people are shockingly ignorant of, it’s awe-inspiring in its own weird ways, and it possesses enough similarity to theology–in that it’s abstract and axiomatic–to really be able to wow an audience. Since the majorities of most audiences are likely to be both ignorant and afraid of mathematics, there won’t often be a lot of checking for nonsense, and when eyebrows do rise, it’s likely that the pastor will be forgiven his lack of expertise in a difficult subject just for the attempt. Thus, pastors will just need to get the peripheries right and talk about big, interesting things that they can somehow tie to God, like infinity. So, who needs a book about infinity and God? Anyone who wants to inoculate themselves from this kind of nonsense.

So you have some information about these books. Please support a nascent skeptical publishing company and some of its first authors! Here is a video put together by James, narrated by yours truly:

And for some more information on Aaron Adair’s project, see my interview with him here: