Here is a post from James A. Lindsay’s blog, reposted here because I have just edited and published his book through Onus Books. it has had really good reviews and we managed to get Victor Stenger to write a foreword for it. Please support our work by buying the Kindle version from the voer image below. The paperback version will follow in about a week: 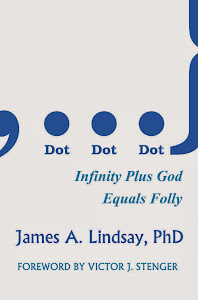 The Kindle edition of Dot, Dot, Dot: Infinity Plus God Equals Folly, my second book, has been released (and is available here). The paperback should be on its heels and will probably be accessible via the same link. Here, I want to take a moment to say a few things about the book and to let you all know what other people have been saying about it already.

First, let me note that I’m pretty excited about this, less than 24 hours in, in fact–with a Friday afternoon release and everything:

Now, I don’t want to bore anyone with the long, winding story of how this book came to be, but I will address what it is a little.

About Dot, Dot, Dot in my words

The book is pretty short, as I had always intended it to be, and as you’ll see from some of the commentary it’s already received, I aimed to keep it interesting, generally accessible, and readable despite being about mathematical topics. I also tried to avoid using equations essentially entirely.

The title refers to the ellipsis, the three dots that we use to denote the elements of many infinite collections, for example {1, 2, 3, …}. The reasoning behind that choice is that really all of what makes up infinity is hidden within those three dots. Of course, we also use “…” as a written response when trying to indicate incredulous silence, which is what many arguments regarding God, especially when involving the infinite, deserve.

The primary themes of the book aim to reveal that “existence” in the abstract sense doesn’t mean the same kind of thing that it means in the real sense, which is to say it makes an attempt to undermine mathematical and philosophical Platonic realism. Indeed, I make the analogy of a “map” (abstractions, mental objects) and the “terrain” it attempts to describe (reality) and repeatedly thrust the idea that we must be careful not to confuse the two. Infinity and God, so far as we can tell, both are abstract, mental stuff used to attempt to understand reality, and the line should be drawn there. This implies, of course, that God, as the being so widely believed-in, simply doesn’t exist. All there is in its place is an idea, or really a philosophical ideal.

I also sought to clear up how easily infinity can end up being misused, particularly in philosophical arguments and even more especially in theological ones. It’s not just a penchant of theologians to invoke infinity when talking about God, though. As I show, it’s an inextricable part of theology and an element of official religious dogmas. Of course, this leads apologists to have to scramble to defend their use of the concept of the infinite, and upon that–their own petard–I hope to hoist them.

What others have had to say about Dot, Dot, Dot

Jonathan MS Pearce, author of The Little Book of Unholy Questions and blogger at the Skeptic Ink Network, has described it as “an easy-to digest mathematical treatise on infinity and its application to the concept of God, which, given the nature of infinity, becomes more and more abstract to the point of non-existence.” He goes on to say, “I am really enjoying the book … James has done a great job on making it a greatly readable and fascinating book.”

Most exciting for me about the book is that it has a foreword by New York Times Bestselling author and noted physicist Vic Stenger. I’m utterly touched that in the foreword he calls Dot, Dot, Dot a “unique and fascinating book” (p. 2).

The book received some nice advance praise as well, something immeasurably exciting for me as a writer that started off via self-publishing–a hard road for getting read if ever there was one.

Peter Boghossian, philosopher and author of the new and eminently useful book A Manual for Creating Atheists (do get it!) writes,

A short and engaging read on the meeting of two huge ideas, infinity and God, that leaves us seeing both as abstract notions that may have nothing to do with reality. Honest and accessible, Dot, Dot, Dot is a great little book to stretch your thinking.

Aaron Adair, PhD, physicist and author of The Star of Bethlehem: A Skeptical View had this to say about it,

Infinity is not only unbounded in bigness, it is unbounded in weirdness, destroying our intuitions, driving mathematicians to madness, and creating theological nonsense. Fortunately for us, James Lindsay can show the amazing features of the infinite without that many words, and staying very light on the equations. Along the way, he shows how the concept can be misunderstood and abused. Read this to avoid making any more cardinal sins and learn how much math is an amazing human endeavor.

God and infinity have much in common, most notably that they are abstractions conceptually devised by man in order to try to make sense of reality. They are a kind of map. And, as James Lindsay so adeptly points out, we must not confuse the map with reality. For too long (mathematical) Platonic realism has been allowed to underwrite belief in God. With excellent books, like the eminently readable Dot, Dot, Dot, that rug is being firmly pulled from under believers’ feet.

In all, Dot, Dot, Dot, has been extraordinarily fun to research, write, and share, and it is my hope that those of you who read it find it equally fun and intriguing to read. Infinity really is a neat thing to think about, and the Platonism that ties it to God is one of theism’s deeper, less obvious, and thornier roots, one well worth pulling up. Reading Dot, Dot, Dot will help you be sure about how to do so.

Again, you can get Dot, Dot, Dot on Amazon.com here. And I do hope you enjoy it!