El Salvador: Where women may be jailed for miscarrying

In relation to my post on stoning yesterday, here i one on abortion and the laws enacted to outlaw it (H/T Neil Webber). From the BBC: 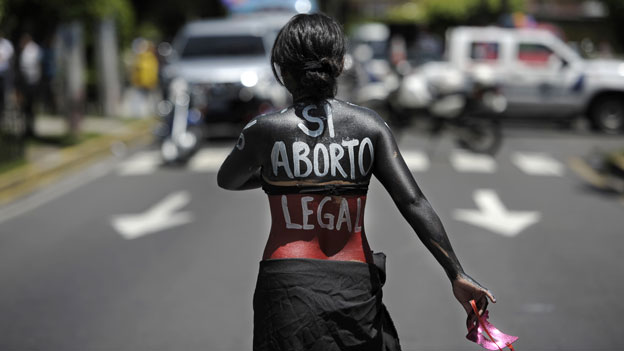 El Salvador has one of the toughest anti-abortion laws in the world. A side-effect is that women who suffer miscarriages are sometimes suspected of inducing an abortion – and can even be jailed for murder.

Glenda Xiomara Cruz was crippled by abdominal pain and heavy bleeding in the early hours of 30 October 2012. The 19-year-old from Puerto El Triunfo, eastern El Salvador, went to the nearest public hospital where doctors said she had lost her baby.

It was the first she knew about the pregnancy as her menstrual cycle was unbroken, her weight practically unchanged, and a pregnancy test in May 2012 had been negative.

Four days later she was charged with aggravated murder – intentionally murdering the 38-to-42 week foetus – at a court hearing she was too sick to attend. The hospital had reported her to the police for a suspected abortion.

After two emergency operations and three weeks in hospital she was moved to Ilopango women’s prison on the outskirts of the capital San Salvador. Then last month she was sentenced to 10 years in jail, the judge ruling that she should have saved the baby’s life.

Her lawyer, Dennis Munoz Estanley, says the legal system has an inbuilt “presumption of guilt” making it hard for women to prove their innocence.

“She is yet another innocent victim of our unjust and discriminatory legal system which jails poor, young women who suffer obstetric complications for murder on the most flimsy evidence,” he says.

Xiomara’s father describes the conviction as a “terrible injustice”.

He testified in court that his daughter had endured years of domestic violence at the hands of her partner. And yet the prosecution – which sought a 50-year jail term – relied heavily on this man’s allegation that she had intentionally killed the foetus.

Xiomara has not seen her four-year-old daughter since the miscarriage.

El Salvador is one of five countries with a total ban on abortion, along with Nicaragua, Chile, Honduras and Dominican Republic. Since 1998, the law has allowed no exceptions – even if a woman is raped, her life is at risk or the foetus is severely deformed.

More than 200 women were reported to the police between 2000 and 2011, of whom 129 were prosecuted and 49 convicted – 26 for murder (with sentences of 12 to 35 years) and 23 for abortion, according to research by Citizens’ Group for the Decriminalization of Abortion. Seven more have been convicted since 2012.

The study underlines that these women are overwhelmingly poor, unmarried and poorly educated – and they are usually denounced by public hospital staff. Not a single criminal case originated from the private health sector where thousands of abortions are believed to take place annually.

Munoz has worked with 29 of the incarcerated women, helping secure the early release of eight. “Only one intentionally induced an abortion, the other 28 suffered natural obstetric complications but were jailed for murder without any direct evidence,” he says.

Last year when Maria Teresa Rivera suffered a miscarriage, she was sentenced to 40 years in jail for aggravated murder.

Like Xiomara, Teresa, 28, had no pregnancy symptoms before sudden severe pain and bleeding, and was reported to police by the public hospital where she had sought emergency help.

The scientific evidence was flimsy, according to Munoz who will soon lodge an appeal, and the prosecution relied heavily on a colleague of hers, who testified that Rivera had said she “might be” pregnant a full 11 months before the miscarriage.

A textile factory worker, she was the family’s only breadwinner and her eight-year-old son is now living in dire poverty with his grandmother.

Cristina Quintanilla’s story is different. On 24 October 2004, the 18-year-old from rural San Miguel was seven months pregnant with her second child, living with her mother in the capital to be near a hospital for the birth.

Her boyfriend was working in the US, but the couple were excited buying baby clothes and saving food tokens.

“Around midnight I felt an immense pain, I thought I was dying,” Quintanilla says.

“I was banging on the bathroom door to get my mum’s attention when I felt the baby drop out. The next thing I remember is waking up in hospital.”

Her mother called the police – a typical step for Salvadorans in an emergency, who took them to hospital.

Quintanilla was given an anaesthetic, and interrogated when she came round. Then she was handcuffed to the hospital bed, charged with manslaughter and transferred to a police cell.

The first judge dismissed the case, but the prosecution appealed, upgrading the charge to aggravated murder.

Quintanilla was found guilty and sentenced to 30 years in jail, where she was vilified as a child killer. Her son Daniel, then only four, spent four years living with his great-grandmother until Munoz succeeded in having the sentence reduced to three years.

“The medical reports couldn’t explain why the baby died, but the prosecutor made me out to be a criminal who could have saved my baby even though I had passed out in pain,” she says.

“I will never understand why they did this to me, I lost four years of my life and still don’t know why I lost my baby.”

Morena Herrera from Citizens’ Association for the Decriminalization of Abortion says these cases have had a chilling effect, with many pregnant poor women who suffer miscarriages or complications during pregnancy “too afraid to seek medical help”.

“I would be terrified to go a public hospital as there is no benefit of doubt given to young women, we are presumed guilty and jailed,” says Bessy Ramirez, 27, from San Salvador.

“We cannot even rely on health staff to put their prejudices aside and treat us confidentially.”

The strict abortion law has other serious human rights implications.

Suicide was the most common cause of death in 2011 among 10-to-19-year-old girls, half of whom were pregnant, according to Health Ministry figures.

It was also the third most common cause of maternal mortality.

Earlier this year, the plight of lupus sufferer Beatriz, 22, attracted international condemnation after the Supreme Court refused to authorise an abortion, even though her life was at risk and the foetus too deformed to be viable.

Beatriz’s health deteriorated while the court deliberated for several months. She gave birth at 27 weeks. The baby died within hours.

Individual members of the current FMLN government, particularly Health Minister Maria Isabel Rodriguez, criticised the abortion law during the controversy over Beatriz’s case. But the government has made no attempt to repeal or relax the law since coming to power in 2009, as it remains popular with large parts of the conservative population, who revere the Church and pro-life religious groups such as Si a la Vida (Yes to Life).

The Arena Party, which is strongly allied with the Church, is favourite to win next year’s General Election.

“Women and girls end up in prison for being unwilling, or simply tragically unable, to carry the pregnancy to term,” she says.

“It makes seeking hospital treatment for complications during pregnancy, including a miscarriage, a dangerous lottery.

“It cannot be in the interests of society to criminalise women and girls in this way.”